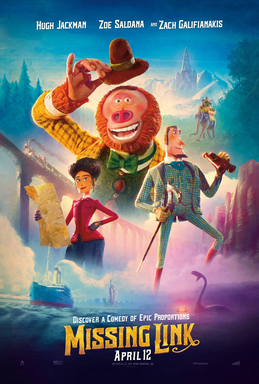 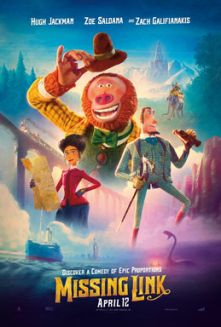 You may have noticed that I gave myself the task of writing a new film review every day leading up to the Oscars. Why did I do this? I can only imagine that my life was going far too well and I wanted to make things a bit more stressful. Especially as I decided that I still had to keep up with my books reviews as well. It’s meant that, so far, I’ve had to write 6 instead of 4 posts this week and I still have 4 more to go. I’ve got a few more films to watch as well. Plus, I’ve got plans on Friday evening and Saturday. I’m going to need a holiday with all of this going on. Luckily I’m having a half-day at work on the 14th but that feels like a lifetime away. Although, it is giving me the chance to see loads of films that I possibly wouldn’t have seen for a while. Or at all. I’m not sure that I’d ever have got round to this film had it not been nominated for Best Animated Feature Film. And, as I now know, that would have been a huge shame.

Missing Link is the fifth stop-motion animation from Laika, the animation studio behind films like Coraline and ParaNorman. Their last offering introduces us to a Victorian explorer played by Hugh Jackman. Not only does Sir Lionel Frost give Jackman another chance to work on his British accent but it sees him travelling the world for mythical creatures. He puts himself in these dangerous positions in the hope that he will one day be accepted into the Society of Great Men. When Sir Lionel receives a letter confirming the existence of a Sasquatch, he makes a deal with the pompous head of the club, Lord Piggot-Dunceby, that would get him into the club if he can provide proof. So, the explorer sets off and finds the Sasquatch he’s been looking for. But, it turns out, that the creature is incredibly sophisticated and can talk. In fact, he was the one who sent the letter in the first place. The Sasquatch, known as Mr Link, wants Lionel’s help to find his distant relatives, the Yetis, so he no longer has to be alone. To do this, Lionel must seek the help of his ex-lover and not get killed by a bounty hunter hired by Piggot Dunceby. All pretty straight forward, right?

Missing Link is a fun film that will delight all the family but it is so much more than that. It’s a cutting takedown of British colonialism. Something that is incredibly timely considering the fact that so many British people are desperate to move back to an era when Great Britain actually mattered on the world stage. Frost is your classic Victorian explorer who uses Mr Link for his own selfish purposes. He treats him badly, forces him to work for him, and claims superiority over him. Yet, the Sasquatch is a well-mannered and kind creature. He can talk and write just as well as any human. Yes, he suffers from having a very literal mind but, as we know from Guardians of the Galaxy, it makes for a funny concept.

The voice actors are very well cast for this film and really bring their characters to life. Galifianakis is the perfect choice to bring the gentle Sasquatch to life. He looks like a beast but has endless charm and kindness. Jackman revels in playing the pompous Lionel but I guess it’s similar to characters we’ve seen from him before. I can’t help but be reminded of his role in Flushed Away but if he’s been an explorer instead of a rat. More hard done by is the film’s major female presence, voiced by Zoe Saldana. Adelina Fortnight is Lionel’s ex and holds the map that will lead them to the Yetis. She has a few good moments but, really, has very little to do. It feels like a major misstep and it’s not entirely apparent why the character features so prominently without ever being developed.

What does make sense, is the animation itself. This film has such a wonderful aesthetic and you can tell how much work went into it. Over 100 sets were built to bring the story to life and every scene is amazing to watch unfold. It’s not as if the studio has even made it easy on themselves. There are plenty of sequences that seem way more complicated than they need to be but it pays off. The sheer technical brilliance on show here is enough to rival even Sam Mendes and 1917. The things these people are doing with models is so unbelievable that you’ll start to believe it was all done with computers.

And I’d say that this explains why the story itself feels so simplistic. There is so much going on visually that the narrative just takes a step back. But there is still plenty of room for fun and morality checks here. This isn’t really a film that’s about the story. It’s about letting the characters be free to do what they do. And that’s what makes Missing Link work so well. It also helps that this film is a different direction for Laika tonally. We’re so used to getting their dark and gothic tales that seeing something so bright and joyful is invigorating. This is a film full of humour, colour and heart that you can’t help but love it. The fact that the animation is absolutely perfect is just the icing on the cake. It’s really easy to see why it became the first non-computer animated film to win the Best Animated Feature Film at the Golden Globes.