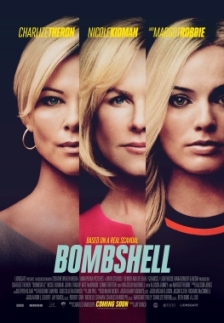 I had to Google John Lithgow after watching Jay Roach’s film depicting the story about the women who exposed Fox News’ CEO Roger Ailes for sexual harassment. Why did I Google him? Because it’s been a long time that I haven’t seen him in a fat suit. What with him playing Winston Churchill in The Crown and then playing Ailes, John Lithgow must have spent a lot of time in a make-up trailer. Bombshell has been nominated for Best Hair and Make-Up. It’s not an award that I usually pay much attention to because who am I to say what is good or not? But Bombshell is in another world. Not only did I legitimately think that John Lithgow had piled on loads of weight but Charlize Theron does not look like Charlize Theron. If she didn’t have such a distinctive and sultry voice, I’d never have known it was her. Who are these make-up magicians? Given them a fucking Oscar and be done with it.

Bombshell opens and you hear the unmistakable voice of Charlize Theron. Then the images catch up with the audio and you see? Not Theron but Megyn Kelly, the former Fox anchor. It’s quite a spectacular transformation and you can tell that Theron put so much into this film. After all, this was a story worth telling. It takes us back to 2016 and to Fox News. Nicole Kidman plays Gretchen Carlson, a Fox anchor who is slowly being forced out of the spotlight. After she is fired, Carlson files a lawsuit against her former boss, Roger Ailes. Carlson revealed that Ailes has made sexual advances towards her that would be taken in exchange for a boost in her career. Carlson’s statement gives other women at the network the confidence to speak out, including Megyn Kelly herself. The women are joined by Margot Robbie playing a young intern called Katya who is a composite of the young women who were abused by Ailes and co. Katya is a Christian who is very big on Instagram and who has always wanted to be on Fox news. After a meeting with Ailes, the naive Katya soon becomes aware of what that dream job will cost.

Bombshell had all of the trappings of a great film. The cast is wonderful and the subject matter is an important one. As we’ve seen through Adam McKay’s recent films, modern history can be dealt with using a slightly unusual technique. But Bombshell can’t decide who it hates and who it champions. The women at Fox are clearly presented a being brave and justified in their fight. However, it can’t really get over the fact that these women work at Fox. That these women desperately wanted to work at Fox News and push the kind of dangerous rhetoric that the network is known for. Then there’s Rupert Murdoch who is kind of the hero but also Rupert Murdoch. There are so many people that this film wants to hit out at that none of the punches do any real damage.

The main narrative in this film is handled with sensitivity and both Theron and Margot Robbie are great in their roles. These are people you don’t necessarily agree with but we all know they didn’t deserve what happened to them. Robbie slowly goes from wide-eyed wannabe to a jaded and damaged young woman. You see her slow change and she does a great job. But this is all about Theron. You can tell that Theron was passionate about telling this story. Has it perhaps given more sympathy towards Kelly? Yes, but this is an important story to tell. It’s just a shame that it is so bogged down with other things.

Parts of this film just feel like a mess and there is so much here that feels misjudged or unnecessary. There is an undeniable humourous tone and several things are clearly included just for laughs. The film opens with Theron’s Kelly speaking directly to the camera that instantly puts us in mind of films like The Big Short. Then there are the constant cheesy one-liner and Kate McKinnon playing a secret Democrat lesbian producer trying to stay under the radar. This is a film that is trying to be funny with its message. Yet, it didn’t seem to tell the actors that. The main performances are played so earnestly and with such respect. It makes sense given the narrative they’re telling but it clashes with the rest of the film. There’s no tonal balance here and it makes for a really weird atmosphere.

Then there’s the quick mention of Rupert Murdoch’s role in getting Donald Trump into power. It’s something that is brought to our attention in the briefest of references and then brushed aside. Bombshell is such a soft indictment of everyone involved but it still delights in attempting to shame the higher powers. The film ends with title card referring to the fact that Ailes and the other men found guilty of sexual harassment were each paid more than all of the victims of their abuse combined. It’s a very horrible point but it really does a little too late in the runtime to mean much. Bombshell is the first #MeToo movie and it should be applauded for tackling such a big subject. It does show the devastation that so many women had to put up with for so long. It shows how easy it was for men to create such a horrible environment in which women were forced to believe this was their only way forward. Still, this isn’t exactly what I had hoped for this film. It might be the first film of this type but I do hope it isn’t the last.