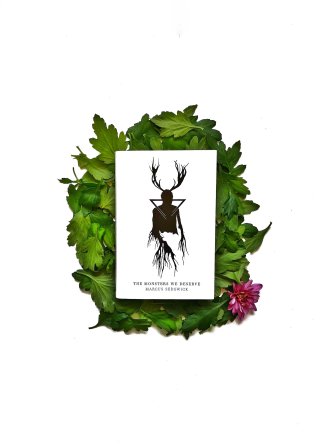 As children we’re so often told that one shouldn’t judge a book by its cover. It’s a quaint little adage that I completely agree with when talking about people but not when talking about actual books. As any bookish person will tell you, you can very often tell whether or not you’ll like a book based on the cover art. I buy the majority of my books based on chance encounters in book shops. The typical romantic-comedy meet cute kind of thing. I walk into a bookshop, come face to face with something beautiful, everything gets a bit blurry, strings start playing in the background, I read the synopsis, we’re a perfect match, and we end up going home together. It’s a tale as old as time. And exactly what happened with the last book that I read. It was just your everyday lunchtime book shop browse and I fell in love. With a simple white cover with a black illustration. It was creepy. It was gorgeous. I had to pick it up. As soon as I read the word Frankenstein on the back I was doomed. I’d never read anything by Marcus Sedgwick but, if this cover told me anything, I knew this was going to be for me.

The Monsters We Deserve is the story of a writer in the midst of a rough bout of writer’s block. Having be set the task of celebrating the 200th anniversary of Mary Shelley’s Frankenstein, a book the author hates, he takes himself off to an Alpine cabin to get something down. As he continues to live a solitary life unable to write and unable to leave, the writer becomes more and more cut off from reality. As the world of the book starts to infect hi imagination, dark creatures and visions start to appear to him. He is haunted by the book he detests and the demons from his own past. But can the two come together to cancel out his internal guilt?

This is a difficult book to describe because it’s not so much about the narrative. It is, in part, a ghost story; the horror filled tale of a man alone in the woods. It features hauntings, strange noises in the dark, moving objects, and unexplained mysteries. Taking much from the gothic tradition, Sedgwick breathes new life into a potentially unoriginal story of a man haunted by his past. It also helps that the writing is fucking gorgeous. There is something about the way Sedgwick writes that is just exciting. These days, as I never seem to have a pencil nearby, I take photos of phrases that I enjoy in books. I could have taken a photo of this entire book. It’s beautiful and haunting. It is clever and exciting writing that, despite have a massively clichéd ending, never does what you expect it to.

You might very well open the cover expecting to read a ghost story or a re-imagining of Mary Shelley’s Frankenstein. The Monsters We Deserve ends up being more of a rumination about the separate acts of reading and writing and the idea of authorial control. As a student of literature, I’ve heard the “the curtains are just blue” argument uttered to discredit my subject more times than I can remember. But that argument misses the point entirely. Yes, maybe an author writes about blue curtains simply because they were blue but that doesn’t mean someone could, or indeed should, interpret that simple decision to have a deeper meaning. As Sedgwick considers in his book, the author owns a book but they do not own the way a person reads it. They can’t. And, as is sometimes the case, the popular opinion about a novel will override the original intention.

The Monsters We Deserve is a book that is preoccupied with a novel that has, the author of the story tells us, been misinterpreted since it was first published. It critiques it, shares its history, and consider its place in the literary canon. This isn’t just the story of a man writing about a book. It is literary criticism. It is a philosophical and sociological exploration of the place literature holds in our society. It is a book that is, primarily, interested in the interplay between works of fiction and their writers. Who, it asks us to question, is creating what? If the writer creates the book then, by the same token, surely the book should create the writer? Something highlighted by the fact that Sedgwick continually makes allusions to himself in the main character whilst never definitively stating who he is.

I feel like this review hasn’t been very helpful to anybody out there who might be considering buying it but that’s because The Monsters We Deserve is a book unlike anything I’ve read. It is a strange but beguiling tale that takes you deeper than you ever thought it would. It is something that has excited me more in terms of language than anything I’ve read this year. It is a definite must-read for anyone interested who loves books and good writing. This will give you multiple reasons to think about your role as a reader and the role of the writer. It’s the kind of thing that should be put onto every university reading list as soon as possible. It’s more stimulating than most of the shit I was forced to read during my Literary Criticism module. I loved this book and I already look forward to reading it again. And to think, this all came about because I judged it by its cover…