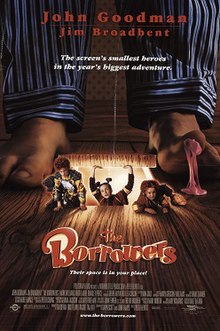 There is something so wonderfully British about The Borrowers by Mary Norton. A small family who survive by, let’s be honest, stealing bits and bobs from the humans whose house they inhabit. Norton wrote a beloved series of books about thieves and managed to make it seem perfectly reasonable. It might have something to do with the fact that she finally answers the question regarding all of those random objects that go missing without a trace in your house. Ever put down a paperclip or something and gone back to find it not there anymore? It’s alright, a Borrower probably just used it to make some sort of climbing device. I don’t remember reading the books as a child but I do remember the BBC television series starring Ian Holm and Penelope Wilton. That was definitely a British classic and something I was reminded of in my third year of university whilst studying a children’s literature course. That series was the second of two television adaptions of Mary Norton’s works but it wasn’t until 1997 that these tiny people made their way onto the big screen. Whilst writing my review of The Sense of an Ending I was trying to think back to the first time I would probably have seen Jim Broadbent acting in anything. I can’t remember for sure but I’d bet The Borrowers would definitely be one of them.

In December this year, The Borrowers will celebrate it’s 20th anniversary. This makes me feel old. I’m not sure that I remember going to the cinema to see it but I do know that I watched it when I was young. It’s also the kind of film that is shown regularly during holidays on the BBC so children would have something to distract themselves with. I tend to look back on it with the same fondness that I nostalgically have for anything from my youth but, really, I don’t know how much I really liked this film. I mean, there was never anything wrong with it but it was certainly a stark contrast to the calm and gentle television series I remembered from 1992. The Borrowers took the characters from Mary Norton’s popular series of books and gave them the Hollywood treatment. Well, kind of. We don’t actually have to sit through a film where the Clock family speak with American accents and everything has been transported to an apartment in New York or anything. But, this is a big, brash and action-packed adventure.

It follows a similar enough structure to the novel but places the Clock family in far more perilous situations. In Mr and Mrs Lenders’ minds, things going missing is an everyday occurrence but their son, Peter, believes there is something in their house taking their stuff. We know he’s right, of course, because there is a family of Borrowers living under his floorboards. Head of the family, Pod (Jim Broadbent) is keen to teach his young children Arriety (Flora Newbigin) and Peagreen (Tom Felton) about the ways of borrowing and how to avoid being seen by humans; the dreaded Borrower squishing Beans. Their mother, Homily (Celia Imrie) has doubts about whether they are ready, which seem to be well-founded after Arriety manages to get herself locked in a freezer. Unwilling to live a life hiding under the floorboard, Arriety yearns for adventure and, on a nighttime stroll, manages to be spotted by Peter. Instead of squishing the tiny being, Peter befriends Arriety against her father’s wishes. When an evil lawyer (John Goodman) attempts to steal their home, Peter and the Clock family must work together to see the rightful owners get their property back.

The Borrowers is your basic good vs evil plot where both sides are trying to get their hands on something: in this case a will. There isn’t a great deal going on in terms of narrative but there is certainly enough action squeezed in to make it feel worthwhile. Whilst searching for the document, evil lawyer, Ocious Potter, discovers Arriety and Peagreen and swiftly calls in an exterminator. This leads to a frantic cat and mouse chase where the two humans seek to destroy the tiny children. There’s a lot of children’s movie violence on display here where nobody really gets hurt but the threat is clear. There’s potential gassing, electrocution, drowning, burning, falling and much more besides. Watching it now, it seems quite vicious for a kid’s movie but, I guess, 90s children like myself must have been made of sturdier stuff. The film keeps quite a good pace and is always moving from one big set piece to another. It is constantly entertaining.

I can’t necessarily say the film has aged well over 20 years but, for the most part, the special effects hold up. It’s one of those films that has a lot in there but it never really dominates. It is the overly CGI’d stuff that ages the worst and, thankfully, most of this is worked around using camera trickery. What is really wonderful about this film, though, is how charming it is. It may have been amped up for cinema but there is still a great sense of Britishness here. The films location is, when you really look into it, kind of confusing but, thanks to the set design, it doesn’t matter. This all just exists in a weird reality where Americans and English people live without any question as to where or when they are. This is just a storybook town where logic doesn’t matter at all. It also boasts an incredible, if truly 90s, cast. Broadbent and Imrie are wonderful as the Clock parents and, I must say, it never gets old seeing a very young Draco Malfoy get trapped in a milk bottle. Then you have cameos from the likes of Mark Williams, Hugh Laurie and Ruby Wax. There’s just something so lovely about this film that stays true to the original source whilst also giving a new generation of children the loud noises and danger they expected.