A lot has changed in the 10 years since Zombieland came out. Back in 2009, the biggest name was Bill Murray in his fairly short but memorable cameo. Jesse Eisenberg was a year away from making waves in The Social Network. Woody Harrelson hadn’t exactly been getting the meaty roles back then and Emma Stone was still the up-and-coming comedy star. Now, Stone is an Oscar winner and Harrelson has seen something of a revival. Everything has moved on a fair bit but, surprisingly, all of the main cast have returned for the sequel. There was talk of sorting out a sequel before the first film ever came out but it went through a lot of delays. After 10 years, you have to ask the question: was it still necessary? Back in 2010, there was talk of a new film franchise and a television show. After so many years have passed, what was there to say? Did we really need to revisit these characters? Especially as we couldn’t rely on Billy Murray turning up again to liven everything up.

END_OF_DOCUMENT_TOKEN_TO_BE_REPLACED

I’ve had a copy of this film sat around for months waiting to find the perfect time to watch it. I was contemplating doing it for Halloween but, last week, the Japanese zombie movie got a limited release in America. So, it seemed like the perfect time to give it a watch. Plus, I didn’t really have time to watch anything new last weekend, so it was an easy fix. And it means I can get a more diverse range of films into my life in 2019. It’s not like I mean to ignore foreign films. I live in Yorkshire and, according to the people who matter, we Northerners don’t appreciate subtitles. I was listening to a podcast recently that tried to shame anyone who had watched Roma on Netflix and not during its limited cinema release. These were, obviously, people who live in London and have an easier time of seeing foreign-language and indie film releases in the cinema. I mean National Theatre Live has barely just made it up here. I know it’s on me to catch-up once films are released but there is still a point to be made about the release of foreign-language films. But not one that really matters right now. I’ll rant about it later.

END_OF_DOCUMENT_TOKEN_TO_BE_REPLACED 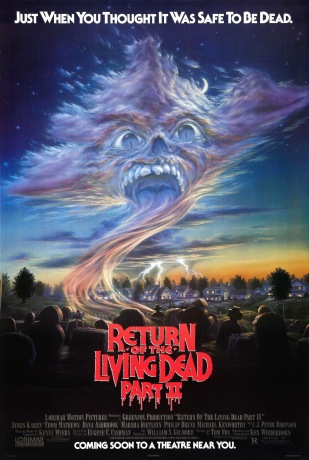 It’s October, which means that the shops have quickly been filled up with everything Halloween related. It’s been that way since the middle of September in most places so it’s no wonder I’m starting to think that it’s closer than it actually is. It’s no doubt the reason that I was really excited for this week’s TBT film. In order to get into the spirit of the whole thing I decided to marathon the first and second films in the Return of the Living Dead series. I’ve never seen the second one before but the first is such an iconic comedy horror film that I figured it probably had some positives. After all, Return of the Living Dead was the first film to introduce audiences to the idea of zombies looking for tasty tasty “BRAAAAIIINS” instead of just eating the whole human. It was a funny, silly, and utterly camp horror film full of slightly dodgy special effects that has, rightly, become a classic. So, you’d expect there to be a little something to get excited about with a sequel. Although, let’s be honest, horror sequels aren’t exactly the greatest of films. With the exception of the Leprechaun series which only got better with every films, most horror franchises rapidly decline after the first one.

She's finally here!
This week is Eating Disorder Awareness Week in the UK, so I wanted to share a book that really helped me when I was younger. I know Jacqueline Wilson gets some stick these days but this book meant so much to me as a teenager.
Who is your favourite Welsh writer?
How many books have you read this month?
I loved All My Friends Are Superheroes by Andrew Kauffman that I bought another of his books. The Tiny Wife sounds just as quirky and enjoyable as that one so I have high hopes.
Happy Folio Friday everyone!
I listened to the audiobook of The Pursuit of Love narrated by Emilia Fox. I'm not normally a fan of actors doing audiobook narration but I've always enjoyed listening to her. She added to the humour and general tone of the book.
Today @readingkitty tagged me to show off my last, current and next read. I quickly cobbled this together before we lost the light.
“The appeal of reading, she thought, lay in its indifference: there was something undeferring about literature. Books did not care who was reading them or whether one read them or not. All readers were equal, herself included. Literature, she thought, is a commonwealth; letters a republic.”