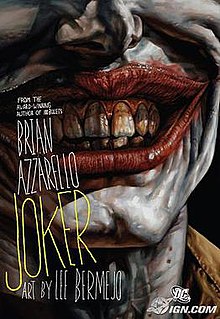 All being well, I should finally be watching The Joker tonight. I’ve been trying to arrange a time to see it for ages. I’m not entirely sure what I’m going to think about it. I try not to take too much notice to criticism before I see a film but it’s been hard to avoid most of it. I know there has been some backlash from female critics and some questions about the motivations of the Joker in it. But there has also been a lot of praise. Plus, I’m already biased against Todd Phillips thanks to his absolutely stupid comments about comedy and “woke culture”.  Guy sounds like a dick and I’m assuming that his film is bound to match his outdated ideas. But, I still want to go in with an open mind. After all, the Joker is one of the most iconic villains in comic book history. So, for this week’s Friday Favourites, I thought I’d explore some of my favourite Joker centric Batman storylines. Quick disclaimer, I’m by no means a Batman comic expert. I’ve not read as much as I’d like to have read but I’ve read enough to get by comfortably.

Another beautiful purple book that's been added to my collection. It sounds like just my thing.
How could I resist a title like this?
BOOK REVIEW - The Hunger Games by Suzanne Collins
Do you ever struggle to read your most anticipated reads?
Second part of my recent book haul. This is the one that prompted it. It sounds so good and I've been thinking about it for a while now.
BOOK REVIEW - The Murder on the Links by Agatha Christie
I've been so good at sticking to my book buying ban lately. Then I ended up waiting for my friend in a bookshop. Needless to say, I walked out with two new books.
Who's up for some Pride recommendations? 🏳️‍🌈
Who's up for some Pride recommendations? 🏳️‍🌈