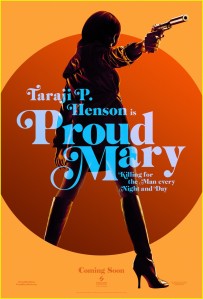 I didn’t know anything about Proud Mary when I watched it this week. I genuinely don’t think I’ve heard anything about it but it sounded like the kind of thing that could be quite fun. As much as I’d like to use my cinema viewing as a chance to make a stand against gun violence given the current climate in American, I’m a bit of a sucker for a good action movie. My inner 12-year-old boy comes out every time there’s a decent gunfight or car chase. It’s the only reason I continue to watch all of the godawful Transformers movies. Robots, check; guns, check; fast cars, check. It’s got it all but a decent script and a good cast. In spite of everything, there will always be a part of me that thinks that movie characters who are super handy with a gun are cool. It’s like smoking. On screen it looks totally badass but, in reality, it’s really harmful and awful. Gun control is a real issue and I do believe that Hollywood has a need to be careful with how they portray guns but, at the same time, I really love a good gunfight. Which is the very reason that I actually watched Proud Mary despite knowing nothing about it. Well, that and the fact that Taraji P. Henson is an absolute legend.