With the release of every new Quentin Tarantino fims there comes the same old gender discussion. Is he a massive sexist who refuses to give women ay real place in his films? This time it all kicked off when people started complaining about Margot Robbie being given so few lines in Once Upon a Time in… Hollywood. Does Robbie get short shrift? Yeah. But it’s not as if the film was even from Sharon Tate’s perspective anyway. It was a film about a male friendship that skirted around the star’s tragic death. It wasn’t supposed to explore Tate’s life but give an image of her as a person. It was a fairy tale where she was the kind, sweet, and promising young woman who didn’t deserve to have her life taken from her so brutally. Robbie and Tarantino manage to prove who Tate was without words. I’m not here to say whether Tarantino’s treatment of women is positive or negative but, in this case, it seems like a needless argument. Besides, since when is the only indication of a strong female character the number of lines they speak? As someone who has trouble speaking up at times, I’d say silence isn’t necessarily an indication of weakness.

END_OF_DOCUMENT_TOKEN_TO_BE_REPLACED

I’ll be honest, I’m not a Quentin Tarantino fanboy. Actually, no that’s not true. I love a bit of Tarantino but I do think he is a bit overhyped. Pulp Fiction is a great film but is it really one of the greatest films ever made? I don’t think so. Is it one of the most overrated films ever made? Quite possibly. Yes, it inspired a generation of filmmakers and spawned countless copycats. The problem is, in the cold hard light of day, Pulp Fiction just feels kind of juvenile. It’s one of those too cool for its own good kind films that everyone sensationalises. In Mean Girls terms, Pulp Fiction is Regina George. Pulp Fiction is possibly one of Tarantino’s most indulgent films. He, like Spielberg, is very good at standout scenes but, below the surface, it’s kind superficial. So, I’m always a bit wary of Tarantino. But, I have enjoyed his films more and more as the years go by. And I was excited to see what he would do with this film. It’s such an iconic time in history and Tarantino taking on the story of Sharon Tate’s murder was always going to be interesting.

END_OF_DOCUMENT_TOKEN_TO_BE_REPLACED 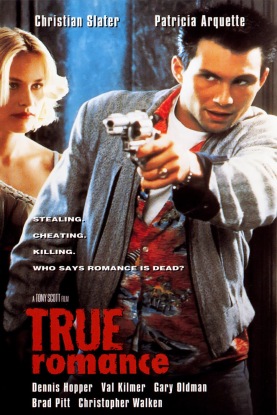 Today is Valentine’s Day and, to get in the mood, I was planning on finding some ridiculous romantic-comedy to review. I’ve been getting into the spirit on my Instagram so I might as well do the same here. My plan was to get home from work and watching something disgusting. Probably a Richard Curtis film or something. Instead, I had a dreadful day and really lost my romantic spirit. There’s nothing like your manager unnecessarily calling you a liar to really ruin your entire day. So, I decided I wanted to watch something a little less conventionally romantic this evening. As I was going through my film collection and found this beauty. It seemed to tick every box: romance, mindless violence, humour, Gary Oldman, Patricia Arquette’s boobs… it was all there. I don’t think I’ve ever really made a definitive list of my favourite films ever because it would be too long and ever-changing but, if I did one day, I’m sure this film would be on there somewhere. And I’ve never really talked about it on here before. I think it’s time.