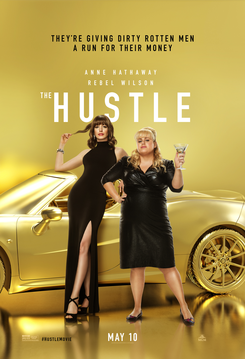 One of the films that I watched for my Throwback Thirty was the Michael Caine and Steve Martin comedy Dirty Rotten Scoundrels. It wasn’t the worst film that I watched last year but it didn’t really make an impact. So, the news that it was being remade with Anne Hathaway and Rebel Wilson didn’t necessarily leave me feeling super excited. I’m all for getting more female leads in comedy films but why does it have to be like this? Dirty Rotten Scoundrels was itself a remake. So, The Hustle is a remake of a remake. I know it’s a bit of a cliche to say that Hollywood is out of ideas but, is Hollywood out of ideas or something? And, as much as I don’t want to sound like those awful men on the internet, I just didn’t really see what the gender switch was really going to add to the story.