Every year I set aside a bunch of LGBTQ+ books and authors to put on my Pride TBR. Inevitably, I never actually read them and I end up feeling guilty about it. So I decided that 2022 was going to be the year I did Pride right and finish my unread books. I’m pleased to announce that I’ve already finished 2 Pride books. Although, neither of them was on my TBR. Instead, I bought the first 2 volumes in this series. It’s everywhere right now that I had to do it.

END_OF_DOCUMENT_TOKEN_TO_BE_REPLACED

I promise that after this week, I won’t ever mention that thing that happened at the Oscars again. Mostly because my opinion of what happened doesn’t matter. Also because we’ve wasted too much time discussing it. What I will say, is that it did take a lot of attention away from the important things of the night. Important things like this film. Had the ceremony gone off without the drama, CODA would have been the thing that everyone was talking about. It’s a very un-Oscars film but it walked away with Best Picture. It should have been the talking point. After all, it could have opened up more people to actually see it. I know it did anyway but it could have been bigger. Like when Parasite won in 2020 and a shit ton of people who would never have watched a Korean film actually bothered to see it.

END_OF_DOCUMENT_TOKEN_TO_BE_REPLACED

This was one of the most hotly anticipated debuts of 2020 and I was definitely intrigued by it. It took me a while to get a copy though because I was still under the illusion that I could keep my promise to be more restrained about buying books. Once I had the copy in my possession, it still took me a while to get round to it, which is the reason I’m trying to be restrained about my book buying. I buy books thinking that I need to read them immediately but find my desire wanes when the time comes. Still, after my month of cosy crime, I was looking for something a little different and this seemed like a great thing to get my teeth into. I love a character study with little or no plot. From the sound of it, Pizza Girl would be right up my street.

END_OF_DOCUMENT_TOKEN_TO_BE_REPLACED

What’s this? Another teen original movie from an online streaming service? I know, I know. Have I learnt nothing from last week? You’d think that I’d had my feel of stupid teenagers thanks to Work It and Save the Last Dance but apparently not. I’ll be honest though, I picked this because of it’s runtime. My weekend was a bit hectic and I needed something I could breeze through in less than 2 hours. Although, I felt as though this also had a bit more going for it than Netflix’s offering. The LGBTQ+ centred story brought a new twist on the teen romance and I always think that things get less stereotypical when you take them out of Hollywood. Dating Amber didn’t sound like it was going to be groundbreaking but I was happy to believe that it would be cuter than your average romantic comedy.

END_OF_DOCUMENT_TOKEN_TO_BE_REPLACED 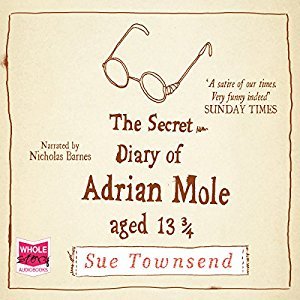 This is one of those books that everyone seems to have read when they were younger but it passed me by. I don’t know why but I just never read it. I mean it is often referred to as one of the greatest pieces of English literature of recent years. In 2019, BBC News included it in their list of 100 most influential novels. So, there must be plenty of people out there who think it was worth reading. I just never did. Maybe I just didn’t like the idea of reading a boy’s diary? As much as I don’t want to perpetuate the idea of gender stereotypes, I wasn’t exactly interested in what a 13/14-year-old boy had to say. Or maybe it was something about diaries in general? I never wrote a diary when I was younger. I think I was always a bit too embarrassed. It seemed too self-indulgent and pathetic. Why did I think my life was so worthy that it deserved being immortalised in a diary? Part of me is quite sad I never did, especially as my memory is o bad these days. Of course, every time one of my friends tells me about reading their old diaries, I am overjoyed that I never tried. Remembering what I was like as a teenager, I can be assured that it wouldn’t make for an easy read.

END_OF_DOCUMENT_TOKEN_TO_BE_REPLACED

I always wonder what’s wrong with the people who wish they’d been born in another year. Like all of those Tumblr teenagers who wish they’d been born in the 80s. It doesn’t make any sense. Yeah, I love John Hughes movies and glam rock as much as the next person. But living in the 80s? I don’t think so. The only people who ever say things like that are the people who only know that era through a microcosm. Ask the people who lived in the 80s, they’d probably tell a different story. Certainly in England, the 80s weren’t the magical place so many young people want to believe it to be. The economy had gone to shit, people were out of work, there was so much violence and hatred on the streets. Kinda like now but with even bigger shoulder pads and double denim. It wasn’t a great time overall. I’m sure people made the best of it but it will have been so difficult for so many. To romanticise any era of the past solely based on your pop culture/fashion tastes is to trivialise the reality of that time. And, as you can tell, it annoys the fuck out of me.

END_OF_DOCUMENT_TOKEN_TO_BE_REPLACED

Let’s pretend it’s Tuesday 18th June and not Monday 24th. This is the film that I had intended to review last week but, at the time, I was probably holding my one-day-old niece for the first time. And, as I gave up all ideas of achieving anything last week, I didn’t even think about taking part in the Creatively Squared hashtag challenge. So, to get myself back on schedule, I decided I would post two movie reviews this week. Starting with a film that has followed me around social media since it was released. I was skeptical about Booksmart in the same way that I am about any film being given almost universal praise. It always seems too good to be true. And as much as I like Olivia Wilde, this was her directorial debut. Could it really be as good as everyone claims? I mean I’ve seen people already describing it as their favourite film. I never trust people who do that. Anyone who says the last film they saw is their favourite is either an idiot, a liar, or someone who has only ever seen one movie in their life.