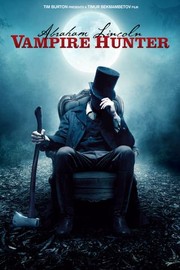 When Abraham Lincoln: Vampire Hunter came out in cinemas I was super excited to see it because, you know, Abraham Lincoln and vampire hunting. Of course, I couldn’t find anyone who shared my interest in it so I never got to see it in the cinema. After all, it’s not the kind of film you should really see alone. I think it would have said a bit too much about me as a person. Then, as time went by, I forgot about this film and never saw it at all. And, to be quite honest, the dismal Pride and Prejudice and zombies hadn’t really convinced me that mixing fantasy with period drama was a very good idea. Normally, I love a bit of altered history but does it need vampires? Especially at a time when vampires had been ruined thanks to the god-awful Twilight films. Added to that, I’ve never been convinced that Dominic Cooper was a necessary addition to any cast list. No matter how many times my friend tries to convince me that he’s fantastic. He just seems a bit smug and gets a lot of freedom down to his looks. He’s like a male Keira Knightley… but nowhere near as good looking or posh. Still, In need of an Abraham Lincoln film to accompany Tuesday’s Lincoln in the Bardo review, I decided it was time to watch it. After all, I felt like Steven Spielberg’s Lincoln from the same year would be a bit heavier than I was really ready for in the middle of my week off. Maybe it would have been appropriate coming after the announcement that the actor is set to retire from acting? Of course, I hadn’t thought of that until this moment… so, the crazy vampire story it is.

Abraham Lincoln: Vampire Hunter is exactly the kind of film that I hoped it would be. It does exactly what it says on the tin and shows us what history would have been like if Honest Abe had dedicated his pre-politics life to hunting vampires. In this version of events, a young Abraham saves his friend, William Johnson (Anthony Mackie), from being beaten by a vicious slaver. The incident winds up with Abraham’s father losing his job and being forced to repay a debt he couldn’t pay. To settle the debt, the slaver (Marton Csokas), who also happens to be a vampire, kills Abe’s mother, an incident which is witnessed by the boy himself. Years later, adult Abraham (Benjamin Walker) vows revenge against the murderer but, obviously, finds the task difficult when he finds out the man is already dead.

Thankfully, the young man is approached by the mysterious Henry Sturges (Dominic Cooper) who offers to train Abraham to fight vampires if he promises to give up his future and follow Struges’ instructions to the letter. Desperate for revenge, Abe says yes but finds the years of fighting random vampires, with his trusty silver plated axe, unfulfilling. Eventually he meets and falls in love with Mary Todd (Mary Elizabeth Winstead) and becomes a politician. Although, just because Lincoln hangs up his axe doesn’t mean the vampires are done with him. Apparently, vampires have a vested interest in slavery because slaves make the tastiest meals. With unkillable monsters fighting with the South, Lincoln must find a way to rid the world of these beasts whilst also freeing their dinner.

Abraham Lincoln: Vampire Hunter was more enjoyable than I’d given it credit for but it should not be mistaken for a decent film. If all you are after is a mindless, action heavy film that tries to teach you about history then it’s perfect. There are plenty of gruesome moments, slow-motion fighting, explosions, and really terrible CGI to keep you mildly entertained. It’s an incredibly silly film that manages to stay on track by pretending it’s more serious than it is. Anyone who sees this film and complains that it’s ludicrous is even more insane than the film. This is Abraham Lincoln: Vampire Hunter and it’s not ashamed of that. There is a dichotomy within the title itself that is played up within the narrative. It attempts to mix vampires with history and politics and, if I’m honest, it barely manages to do any of them.

The fact that Vampire Hunter takes itself so seriously means it elevates itself slightly. It doesn’t try and purposefully play everything for laughs, which would only have ended being hugely cringe-inducing. Instead it is a silly film that never overplays it’s silliness. It knows it’s a shit film but it won’t let that stop it trying to be a great film. All of the actors do tremendous jobs at keeping things straight and letting the natural comedy fly. It’s not the kind of thing that everyone will love and it does get tiresome as we get further into Lincoln’s politics. However, I was pleasantly surprised by how much I enjoyed this film. It won’t tell you anything about Lincoln, the Civil War, or how to make a film about them but it delivers on the title. Lincoln was a grave man so it seems only fair that this film treated him with that same solemnity. It’s crazy but, if you have a weird love of bad films, you’ll find yourself getting hooked. If it had perhaps been a tad shorter then it would have been ideal.

I have to be honest, if it hadn’t been for John Hurt’s death last month I probably wasn’t ever going to see this film. It wasn’t that I thought it would be bad but it discussed a prominent American figure that, really, I didn’t know a great deal about. I mean I know enough about Jackie Kennedy but, when it comes down to it, my knowledge of American history is pretty limited. It’s probably something I should rectify but my historical education really just focused on the United Kingdom. Although, I guess everyone knows about JFK, Jackie, and the assassination. However, the name Jackie Kennedy only really brought images of pink Chanel suits and pillbox hats to my mind so I didn’t really see much need in seeing Natalie Portman playing her on screen. Then, we heard the tragic news about John Hurt’s death in January. Jackie was one of his final films before his death so I decided it was a good reason to see the film. John Hurt was one of the finest actor’s around and could turn his hand to any part. Yes, he wasn’t a traditional leading man but he has been a significant part of some great films. I can think of worse reasons to want to watch something.

I was worried when Jackie started and I first heard Natalie Portman speak. I had the horrible feeling that her attempt to emulate Jackie Kennedy’s soft spoken and breathy accent was quickly going to descend into a terrible parody. Thankfully, the actor manages to keep a hole on her mimicry and keeps the vocals situated in something resembling reality. It all adds to the character of Jackie Kennedy that director Pablo Larraín is attempting to capture. A woman who, having already been catapulted into the spotlight, suddenly finds herself having to deal with the ultimate tragedy whilst the whole world watches her. The wife of the President of the United States who is caught between a state of mourning, helplessness, and desperation to preserve her husband’s legacy. To prove me extra wrong, Natalie Portman’s portrayal of Jackie is absolutely brilliant.

The film’s narrative is framed by an interview Jackie gave to Life magazine reporter Theodore H White (Billy Crudup). As the interview takes place Kennedy makes it clear that she will have ultimate control over what is printed and she wants her husband to be remembered the way she thinks he should be. She is a woman who is perfectly in control. Until she relives the horrific moment when her husband was shot twice as he sat next to her. She breaks down as she remembers trying to keep the contents of his head from spilling over her lap. This, obviously, is the kind of thing that she does not give approval to be printed. Jackie takes the public figure that everyone things they know and show the emotionally lost person underneath.

The story flits back and forth between Jackie’s life before and after the assassination. We see her conduct a television tour of the White House and it is a different image of the First Lady. She is unsure of herself and self-conscious. She attempts to justify her redecoration of her new home in order to bring a sense of history. She wants to surround herself with beautiful and significant things. Something that her husband and potentially the American people just don’t understand. She wants to present her husband and his presidency as she thinks it needs to be remembered. This is the age where television gives everyone an eyewitness account of every moment so she understands the importance of her performance.

The narrative then jumps around between the days after the President was killed, whilst Jackie tried to arrange a funeral on the same level as Lincoln, and in the future when Jackie speaks with a Priest (John Hurt) about her fears and doubts. Really, these different narrative aren’t necessary as the most important and stand-out sections occur in the aftermath of JFK’s death and Jackie’s desperate attempts to get her own way with the funeral. The time when she has to wrestle with the public image of a grieving wife, the statesmen like role of the First Lady, and lost woman who has no idea what her life will become now her husband is dead. The woman who has become synonymous with her looks is unable to find order within her wardrobe. In fact, the most memorable scene is the one in which a numb Jackie peels off the infamous pink Chanel suit and tights that are covered in her husband’s blood. It is a devastating and poignant scene.

As with all of these types of biopics, you won’t rid yourself of the sense that the reality on show still isn’t being completely truthful. However, the narrative opens up the figure of Jackie Kennedy beyond what was on show during her public life. It gives you the chance to view her from a perspective that you may not have considered and, thanks to the great performance by Natalie Portman, presents her in a measured and understanding way. The film is a stark look into an important and difficult time for both the Kennedy family and America. With a great supporting cast, including a short but memorable turn from the late John Hurt, and an incredibly haunting score from Mica Levi, Jackie is a film that I’m so grateful I took the time to watch. It would have been a shame to have missed such a wonderful film.