Today is St George’s Day: a time where the English get patriotic, in other words drunk, because of the story of some geezer slaying a dragon. It’s a day of English-ness, heroics and fire-breathing dragons. It’s also a day when you have to put up with fucking annoying people managing to irritate you with these aforementioned traits. It seems to me there is a perfect film out there that sums up the characteristics of the day. The film also happens to be celebrating it’s 10th anniversary this November whilst the novel it is adapted from will be 15 years old in July. Well it looks like the fates are with me this Throwback Thursday. I fucking love it when a plan comes together.
Harry Potter and the Goblet of Firesaw the Harry Potterfilm franchise continue its slow descent into the world of dark fantasy. Following on from Chris Columbus’ family-friendly, slightly fuddy-duddy, opening duo, Alfonso Cuarón was the surprising choice to take up the challenge and certainly upped the game. With every new release, the series, and indeed its young cast, grew more confident, mature and willing to take risks. This fourth instalment was helmed by Mike Newell, a director with a varied professional history: he was an equally unexpected choice to try his hand at adapting JK Rowling’s much-loved novels for the big screen.
I have to confess, The Goblet of Fireis my least favourite of the Potter films and that includes the incredibly childish and twee first two. This has nothing to do with the book because, whilst it will never be my favourite in the series, I love the excitement of the Triwizard Tournament and I always cry over the graveyard scene. The film just doesn’t stand-out when compared to its brothers. This is probably an unavoidable consequence of the sheer scope of the novel. It was fucking huge and screenwriter Steve Kloves had a lot material to cut to make this happen.
The film is still a lengthy affair, running at over two and a half hours, and you definitely feel it by the end. So much goes on in the novel that you can’t help but think that maybe Kloves could have taken a few more bits out? Such as the annoying and unnecessary Rita Skeeter: despite my overriding love for Miranda Richardson, Skeeter added to nothing but the film-length. There are already an exhausting number of narrative strands to follow: a Quidditch World Cup; the drama of the tournament; the new characters that need to be introduced; the children’s everyday school-life; teenage angst; romance; the Yule Ball; and the unforgettable threat of Lord Voldermort’s return. Phew.
Everything is fighting for attention and, because of this, the editing often seems choppy. There are several moments when you can’t escape the feeling that scenes were originally longer and cut for the sake of time. Frustratingly, these bite size pieces only feel unnecessary and waste even more precious time. This doesn’t feel like the kind of film Newell set out to make and it doesn’t feel like the kind of feel Potter fans were really hoping for.
It’s certainly not what I was hoping for: Newell doesn’t quite live up to expectations when it comes to the action sequences. Harry’s encounter with the dragon is never as thrilling as the legend of St. George and the subsequent Triwizard challenges never quite reach the excitement levels that they should. Everything is rushing towards the huge finale that fans of the books have been waiting for but, in the end, even this is rushed through. Ralph Fiennes is an excellent choice to bring the Dark Lord to life but his showdown with Harry doesn’t resonate as much as it did in the novel. The Goblet of Firedoesn’t feel like a film in its own right but something rather perfunctory that is leading to something bigger, better and more dangerous.
Although, to give him some credit, Newell is strong when it comes to the focus on character. If the first two chapters gave us Harry Potter’s annoying childhood, The Goblet of Fireis oozing with teenage hormones. Our heroes have suddenly entered their adolescence and sexual awakening (with a little help from some a few Veelas). The boys also have suitably rebellious yet still conservative messy hair. If I’m honest, the focus on character over action is probably where my major problem with The Goblet of Fire comes from. It focuses solely on Harry and his increasing sense of self-importance. When you’re dealing with a hero that’s as fucking disagreeable as Harry Potter is then you need some thrilling action to distract you. I’m not going to sit through a film that wastes its dragon potential in favour of pathetic teenage arguments and God complexes.
Mike Newell does a good job with a difficult task but it cannot be denied that it is problematic. It doesn’t necessarily feel like a Harry Potter film; maybe more of a cheesy American teen drama with a few CGI mythical beasts. The Goblet of Fire isn’t the black sheep of the Potter films but it is the awkward cousin who you do everything to avoid at reunions.

Watching The Hobbit trilogy has felt a bit like Christmas dinner. The first course is absolutely delicious and you come away satisfied and hungry for more. By the time the second one gets under way, you realise you’re getting fuller and could probably have made do with some smaller portions. Then comes the dreaded final course. After the first two you’ve had so much fucking food you might burst but then someone brings out the Christmas pudding. You know you don’t need it but you eat your portion anyway and spend the rest of the day, uncomfortably full, half regretting you’re decision. It’s all lovely in itself but together it’s just too much.
END_OF_DOCUMENT_TOKEN_TO_BE_REPLACED 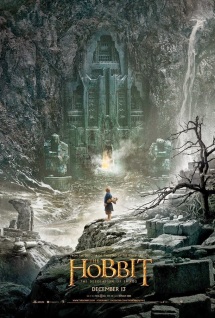