Can you believe that we’re a week into 2018 already? I already feel myself becoming the ‘new me’. I’ve posted a record breaking 5 times this week and have got more than halfway through a book. I know! Who the fuck am I? I’m under no illusion that this greatness will last but I feel like making small resolutions that aren’t really resolutions is working better for me. It’s stuff like read more but only when you want to. Drink more water. Spend less. I’m not the kind of person who can just suddenly make major changes in their lifestyle. I’d never be able to wake up one day thinking “eating meat is a terrible strain on the environment” and just give up meat. I’d be craving chicken nuggets in no time. Secretly making trips to the supermarket to buy packets of sliced meat and eating them in dark alleyways to hide my shame. I’d need at least 2 months before I could even contemplate the idea of never eating steak again… and I so rarely eat steak. Ha ha ha! Rarely!? Steak!? Geddit? Nope? Okay, on with the business at hand.
END_OF_DOCUMENT_TOKEN_TO_BE_REPLACED

So today is the first in my new series that I have, ingeniously, called Throwback Thirty. As I laid out in my blog update post, for the next 52 Thursdays, I will review a film that came out the same year that I was born. This is all in honour of my 30th birthday: an event that will take place on March 5th. Am I making a big deal of it in the hope it distracts me from the fact that I’ve not made it to the point I thought I’d be at this age? Maybe? Am I also hoping that seeming okay with it will make me comfortable with being a 30 year old? Maybe? Am I just using it as an excuse to watch loads of questionable 80s movies? Erm… hells yeah! I am a huge love of 80s films anyway so a year of watching some of my old favourites and some that I’ve never seen before sounds perfect. I’ve put the title of loads (way more than 52) films in a jar and each week I will pick out a title. By happy circumstance that first title I picked out was Twins. I guess it’s only right considering I am, in fact, a twin myself so this is also my sister’s 30th birthday year. In our 3 decades together, my sister and I have never got involved in a dodgy deal about a prototype fuel injector but we’ve got into some scrapes. I’ve got no doubt that I’d be the Danny DeVito of the pair and she’d be Arnie… although I’m not sure she’d necessarily think that was a good thing. We’re very different people. Me? I’ve been practicing trying to say “put the cookie down now” in my best Arnie voice ever since I watched Jingle All the Way last month.

END_OF_DOCUMENT_TOKEN_TO_BE_REPLACED 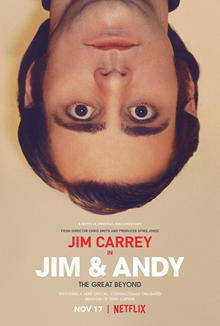 I first saw the trailer for this Netflix documentary on Facebook and I was obsessed. To be fair though, I’ve been obsessed with Jim Carey’s descent into whatever kind of existential crisis or performance art he’s been going through over recent years. Watching him declare his love for Emma Stone and talk about his shitty paintings with absolute sincerity has been super fascinating. So to get the chance to see the supposedly buried behind the scenes footage of the 1999 film Man on the Moon. The trailer promised footage so outrageous that Universal didn’t want it to be released in case Carey came across as “an asshole”. I mean who wouldn’t be interested in that? Although, I can’t say that I really remember the film. I’m absolutely positive that I’ve seen it because I have the vivid image of its opening scene in my head. It may just be because it’s so iconic but I’m sure I remember watching that black and white shot of Carey as Andy Kaufman in front of a black screen apologising for having to cut the movie down to that opening scene. Anyway, it doesn’t really matter. I still really wanted to watch this documentary. Mainly because, as a kid, I loved Jim Carey films. My sister and I were obsessed with the second Ace Ventura film and I can’t even begin to describe how much I still love The Mask. Oh, and the bloopers for Liar, Liar, we would absolutely piss ourselves every time we heard him say the word “goose”. Plus, you know, I love it when famous people start to go insane. Like when Robbie Williams started talking about how he believed in aliens. I loved it.

There was such a lot of mythology surrounding the film detailing the life of entertainer Andy Kaufman. Possibly because there was so much mythology surrounding the man himself. How can you trust anything regarding a man who tricked so many people with his intricate performances and whose own death created a strong conspiracy theory about it being fake. So much of Andy Kaufman’s career was based around perception: how he wanted people to see him and how he manipulated their view. It’s a fascinating concept and it wouldn’t really be surprising to discover that all the stories of Jim Carey, who played Kaufman in the film, going super method whilst filming were all just fake. I guess it would be quite a fitting tribute to the man himself. However, Jim & Andy the new documentary from director Chris Smith, attempts to prove that everything we think we know to be true is, in fact, the truth.

The film knits together behind the scenes footage from Milos Forman’s Man on the Moon with clips of both Kaufman and Carey’s similar journey’s towards fame, and recent footage of an interview with Carey about his experience. The film tries desperately to present itself as an in-depth analysis of fame, performance, art and the madness that lies so closely behind it all. The only problem is, Jim & Andy isn’t as deep or intellectual as it thinks it is. On the plus side, the film is incredibly watchable. The behind the scenes footage is fascinating and there are moments within the present-day interview with Carey that are surprisingly thought provoking. It’s just a shame that it all starts to wear a little thin a bit too quickly.

There are clear connections between the two performers that the film seems too desperate to highlight. As if Carey was destined to play him because they were one and the same. It’s an interesting idea but it all starts to get lost when Carey starts getting too psychoanalytical with his career choices. After a while, this starts to feel like a great insight into a man who uses comedy as an escape but more about perfecting the performance of a man in his 50s trying to seem introspective. The problem with Carey, as it was for Kaufman, is that you never know how much to take seriously. What is real and what is just part of the act? Is this all part of the same build-up he’s been setting up in the last few years before he reaches the mother of all punchlines?

I mean how much can we really believe this documentary anyway? Did Carey really stay in character as Andy Kaufman or his alter ego Tony Clifton for the entire shoot? Or was it simply for the behind the scenes footage? Does it matter? I don’t know. What I do know is that the footage is great to watch as we see Carey refuse to be referred to as Jim whilst he embraces Andy and Tony totally. It, obviously, causes a load of tension on set and makes things incredibly difficult. Some of his co-stars think it’s hilarious whilst others are, understandably pissed. There are some weird but tender moments where Andy’s real family have encounters with Carey in the guise of Andy. It’s compelling viewing and, whether it’s real or not, is a great story. The family are able to get some form of catharsis thanks to this man who is pretending to be their son or brother. But, at the same time, it all feels a bit too weird to ring true. We’ll never really know and, to be honest, that’s exactly how Kaufam would have wanted it.

Jim and Andy sets out to tell the untold story of the making of Man on the Moon whilst also highlighting the talent of the two performers at its core. The documentary only highlights the original film’s argument that Kaufman was a one of a kind performer who has nor ever will be matched. It also goes to great lengths to do the same for Jim Carey himself. Jim and Andy is, as I’ve mentioned, a very watchable film but, really, it needed to be shorter. We get the basic message it’s selling very quickly so a lot of the film is just going back on familiar ground. Instead, there are moments when it starts to feel like a vanity project for an actor who has long since faded into the background. This is the Jim Carey show and he plays his part with utter sincerity. Either he’s doing a great job at playing the role he’s created or he really has just become absorbed in the idea of his own greatness. Your individual viewpoint on that topic will have a major impact on how you view this film. Either way, it’s worth a watch.