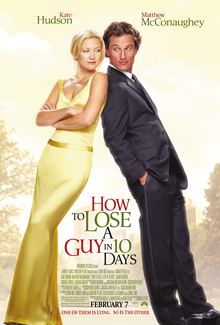 As I suggested in my review of How to Build a Girl, there was an obvious choice for a companion TBT film. Almost Famous is a clear bedfellow for Caitlin Moran’s coming-of-age tale. The only problem is, I never want to watch Almost Famous again. I know that I’m in a tiny minority of people but I really don’t get what the fuss was about. It just seemed a bit too overindulgent and facile. It was pure Hollywood and didn’t really speak much to me or my experiences. I don’t understand why people adore it so much. So I needed to find an alternative. I went for another Kate Hudson film. Not one I was any more excited to watch but one that I could at least sit through. Handily, she plays a journalist who tries to get ahead by being unnecessarily mean. Oh, and it has “how to” in the title. Not a bad companion film after all.

I can’t remember exactly how old I was when I first saw this film but, considering the year it came out, I guess I would have been 15/16. A 15/16-year-old girl would, under normal circumstances, be the ideal audience for a romantic comedy starring Kate Hudson and a pre-McConaissance Matthew McConaughey. After all, the majority of my school friends were desperate to see it. I remember the day pretty well. It was a friend’s birthday party and we were all gathered at her house. We were going to watch a film and most of the group were pretty excited by the prospect of this. Only another girl and I were against the idea. I know we like to say that even one person can make a difference but not when that person is trying to keep girls from getting their rom-com fix.

I was not a fan. It was a stupid film. The narrative was ridiculous, the acting was over-the-top, the characters were all awful, and it was just too obvious. It made me angry at 15 and it made me angry again at 32. The thing that irritates me the most about this film is the way it makes fun of women to appeal to women. Its premise is built on awful stereotypes about women in relationships. How women are always too quick to fall in love, they’re pushy, argumentative, controlling, and overbearing. It’s funny because women are, you know, stupid. It’s a film that really makes you feel sorry for men having to put up with them. After all, as this film tells us, women have no idea how to be in a healthy, adult relationship. They know nothing about love or men.

Speaking of men, this film doesn’t exactly paint them as perfect but it never focuses on their potential flaws. McConaughey’s Ben is seen to put up with an awful lot of shit from Kate Hudson’s Andie to the point where you’re meant to feel bad for him. Despite the fact that he’s also using her to win a bet. And not just that, he also has no idea how to treat women. He’s a selfish prick who doesn’t even try and understand Andie’s behaviour. He doesn’t think about anyone else’s needs at all but, at the end of the film, he still gets the girl. Ben doesn’t learn a damn thing about himself and still manages to walk away with a beautiful woman who is in love with him. It’s sweet because men are, you know, awesome.

I don’t understand who this film was made for. Okay, I do know who this film was made for. Women who enjoy watching beautiful people fall in love despite everything. Women who believe that there is one single person in the world that they’re meant to be with. Women who think feminism is bad because it wants to get rid of men completely. This is a film for people who don’t like to be challenged and aren’t looking for surprises. This is a tired concept and one that has been done way better a thousand times before. Yes, Hudson and McConaughey are charming in their own ways but it’s not enough to mask the sheer unoriginality or lack of common sense in the script. It’s a genuinely terrible film and I’m amazed by how often I see people talk about how much they love it. I should have just watched Almost Famous. Although that movie is so vain, it probably thinks this review is about it.