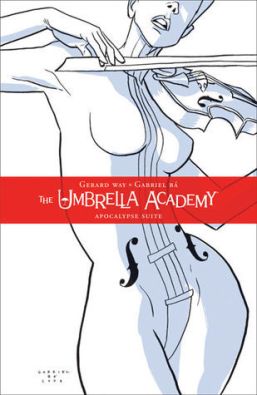 This weekend I, like so many other Netflix users around the world, sat down and binge-watched the second season of The Umbrella Academy. When the first series came out, I didn’t know much about it. All I knew was that it was based on a comic book series written by the lead singer of My Chemical Romance. Now, I admit that Three Cheers For Sweet Revenge is one of my guilty pleasure albums but I’ve long outgrown MCR. I didn’t expect to enjoy the show but Netflix is clever. It kept playing the trailer over and over until I couldn’t help but watch. I was quickly obsessed. It was a great show and the soundtrack was phenomenal. It felt new and nostalgic at the same time. I couldn’t wait for the follow-up season and, though the narrative wasn’t quite as slick, it was still bloody entertaining. So, when I realised I wouldn’t finish a book in time for today’s review, I knew I had to do something drastic. I bought the Kindle edition of the first volume of the comics. I had to see for myself.

The idea of there being a school for extraordinary children isn’t exactly an original one but Gerard Way certainly brought his unique spin on it in The Umbrella Academy. In an unexplained worldwide phenomenon, 47 babies were born to women who had not previously shown signs of pregnancy. 7 of these extraordinary young people who were adopted and trained by an eccentric inventor. They became a superhero group known as The Umbrella Academy. With their individual powers and their “father’s” inventions, the group come together to save the world. At least that was the plan. We meet the group as adults and they are fractured. The only thing that brings them together is the death of their adopted father. A death that happens to coincide with the end of the world. Can the siblings put their differences aside to prevent the apocalypse?

The thing that really stands out in this series is the universe that everything takes place in. It is a strange world that really leaps off the page. There are hints of so many different influences as it embraces the past and the more avant-garde. The character design is striking and unusual. Spaceboy and Vanya, in particular, are really memorable in terms of their looks. The problem is the lack of real introduction and characterisation. The fact that this is a miniseries means that everything happens at lightning speed so we don’t really get a chance to meet everyone properly. We’re just thrown straight into the action and only given hints of who these people are. I’d even say that, had I not known the TV show, I might not have worked out what everyone’s powers were meant to be.

I think the main problem with this volume is that Way simply had too many ideas for the length of series. There are so many things going on and so many things to get your head around. It just ends up being a bit messy. I realise that this is only volume 1 and there is bound to be more revealed as the whole thing goes on but I still think it could be more reader-friendly.  Something I think could be said about the illustrations too. Now, it’s probably just because I was reading the Kindle edition but sometimes I felt the panels were a little too crowded and it became difficult to decipher what was going on. I think, generally, the art is amazing but there were just moments when I struggled with it.

That’s kind of the feel I get form the whole thing. The first volume of The Umbrella Academy confused me, so I’m really not sure how to feel about it. The concept is such a fantastic one but, after watching the Netflix series, it’s difficult not to compare. The mini-stories are entertaining but the whole thing moves on so quickly that you can’t really get to grips with anything. Things happen way quicker than they realistically would and you never chance to indulge in the tension of the situation. The apocalypse is announced and then a few pages later it’s happening. Then there’s the ending itself which is resolved so quickly you wonder what the fuss was about.

I think, had I gone into this volume with no prior knowledge, I’d had just thought it was a complete mess. Nothing is explained and you’re left with no real idea of who these superheroes are. Yet you’re meant to instantly care that they might all get killed. It’s like those awful books that include cliffhangers in every chapter so you’ll keep reading. Gerard Way isn’t giving anything away because it’s an easy way to get people to keep coming back. However, this lack of depth makes it really difficult to get to grips with the world we’re in. The design engages you but there isn’t enough substance to keep you in it. I know as bookish people we’re always meant to think the book is better but the TV show has the structure, depth and pace that the comic books missed. I didn’t hate this volume but it hasn’t inspired me to keep reading.