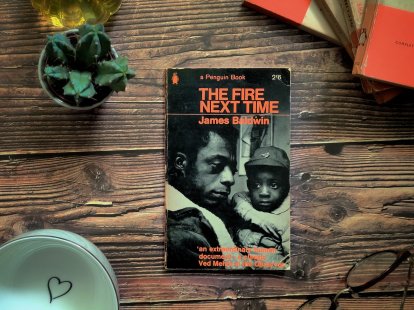 When I started my holiday this week, I had all sorts of grand plans to read loads of my unread books and get ahead with the blog. We’re only halfway through but it’s becoming clear that I’m not going to achieve a great deal with this week. I spent Sunday and Monday playing with my niece, which was admittedly a fantastic use of my time. It just meant that the closest I got to reading was the first page of That’s Not My Kitten and I’m not entirely sure that would count towards my yearly reading count. It didn’t help that my desperation to finish Those People in time for my Monday review had left me not wanting to read anything else on Sunday night. So, in order to get something finished for my Wednesday review, I needed to play strategically. I wanted a small book from my TBR pile. Thankfully, this James Baldwin book has been near the top for a few weeks now and it seemed perfect. Much heavier going than my previous book but that was a welcome change.

In 1962, James Baldwin sat down and wrote a letter to his nephew. This letter, along with a second essay, was published together in 1963. Both essays were written in 1962 and concern racism in American. The letter to his nephew aims to help him identify with the Black men in his family. Baldwin wants his nephew to turn away from violent reaction to racism and, instead, focus on embracing the experience of being a Black man in America. In the letter, Baldwin recounts one of his encounters with the police in which they did everything they could to humiliate and belittle him. He is all too aware of white supremacy and the violence that goes along with it but he is wary of challenging it in the wrong way.

He tells his nephew that black people are born into a society that expects them to perish in their ghettos. Baldwin aims to push his nephew into changing that narrative. In living a life of love and hope that will one day show his oppressors that they were wrong. Towards the end of the first letter to his nephew, Baldwin writes:

This is your home, my friend, do not be driven from it; great men have done great things here, and will again, and we can make America what America must become.

This is what Baldwin does so well. He understands the anger and the fight that needs to take place but he is hopeful. He understands the importance of history and the need to learn from it. He is always looking to the future and embracing the kind of country that America could become. His words are still as inspirational and important as they were nearly 60 years ago.

The second essay in this collection is much longer and takes up most of the volume. It discusses the role of religion in the Black American experience. Baldwin starts by recounting his experiences as a teen pastor and how it made him feel. He initially felt at home in the Church and thought he had found his place. He felt connected to a higher power and to a strong community. However, he goes on to describe how he began pulling away from Christianity because he was repressing who he is really was. Religion was, as he saw it, a problematic system that was built on inequality. Baldwin knew that he needed to find another use for his voice. He goes on to recount a dinner he had with Elijah Muhammad the leader of the Nation of Islam. Muhammad believed that white people were devils who needed to be obliterated. Baldwin, who saw some good in white people, could not advocate this viewpoint and decided then and there that the NOI was not for him.

The second essay in this book is a complex look at both religion and racism as a whole. It also adds to the general theme of looking back to the past to prepare for the future.

To accept one’s past – one’s history – is not the same as drowning in it; it is learning how to use it. An invented past can never be used; it cracks and crumbles under the pressures of life like clay in a season of drought.

The essay not only allows Baldwin to look back at his past and learn from it but also to show a wider message. He discusses the “black god” that Black Muslims have invented so they don’t have to deal with the oppression of the “white god” of Christianity. This, he claims, will never allow them to be truly free. They are reinventing themselves to create a new narrative but that narrative is doomed to be flawed. Instead, Baldwin looks back at what he has learnt and how it has led him to where he is now.

Baldwin’s time as a pastor was definitely a massive influence on his as he became more prominent in the Civil Rights Movement. You can see in his descriptions of giving Sermons and teaching young people that he knew the power of his words. That he knew that he had a gift. He just needed to learn to use it for the right reasons. He needed to embrace an approach that was about love and learning instead of violence and revenge.  For me, the strongest message of the whole collection comes as Baldwin discusses life and, inevitably, death.

Perhaps the whole root of our trouble, the human trouble, is that we will sacrifice all the beauty of our lives, will imprison ourselves in totems, taboos, crosses, blood sacrifices, steeples, mosques, races, armies, flags, nations, in order to deny the fact of death, which is the only fact we have. It seems to me that one ought to rejoice in the fact of death – ought to decide, indeed, to earn one’s death by confronting with passion the conundrum of life.

Once again, as in his letter to his nephew, Baldwin is advocating life and earning your humanity by living well. White Americans, he tells us, don’t believe in death so they have come to fear otherness. Baldwin understands that to live “as nobly as possible” is part of their responsibility to “those who are coming after us”.

Now, more than ever, Baldwin’s words are important and powerful. As a writer and a speaker, he was able to get to the heart of the matter and inspire. His words aren’t powered by intense anger but it exists. He understands the struggle of being a Black American and he knows that there needs to be a change. At the same time, he sees white supremacists for what they are: misguided, fearful, and lacking in awareness. They need to be guided to a better way of thinking instead of pushed into subservience. Within Baldwin’s essays, we see the pain and sadness that has been passed down through generations of Black people in America. He doesn’t focus on that but, instead, offers hope. It’s a beautiful book and a must-read for anyone who is advocating for Black Lives Matter.

Another month and another Agatha Christie book to review.
Are you planning on reading this?
"It would be a dull world if we all thought alike."
Thank God it's Folio Friday!
I may have made a mistake with this purchase because I've not got a great track record with this genre. It just sounded irresistible. A dinner party and a murder? Exciting.
Do you have a favourite Kazuo Ishiguro novel?
I'm not setting an official TBR this month after what happened last time. However, I will possibly probably get around to reading this in April maybe. It's something I've been meaning to get around to for a while and I will need a P title for my Spell the Month Challenge.
Today's review went up on the blog this morning.
Happy Easter everyone!