It feels like ages since I last posted something on here. Given how everything has gone in the last week or so, I’m glad that I made the decision to stop posting here. It would have felt weird trying to act as if everything is normal when so many people are fighting for their basic human rights. I’ve always considered myself to be anti-racist but I’ve realised that I’ve been doing the bare minimum. So, I’ve taken the last few days to think about who I am and what I can do to help. That includes reading and learning as much as I can. Meaning my June wrap-up may have a bit of a theme to it. For now, one week late, it’s time to look back on my last month.

Girls Under Pressure by Jacqueline Wilson

It seems like a really long time ago that I was going through Jacqueline Wilson’s Girls trilogy. A lot has happened this month. This was always my favourite in the series and this proved to be same this time around. The second book of the four is the strongest and has the most important message. I think it should be a must-read for all teenagers. The way it deals with body issues and eating disorders is a fantastic way to get young people thinking about their own identity.

Girls Out Late by Jacqueline Wilson

The third book in the series. When I first read the books as a girl, this was the final one that I read because I never knew about the fourth book. I wasn’t really a fan of the novel when I was younger and I can’t say that I liked it much this time. After the last book, this just felt shallow and problematic. There were so many things that the girls did that felt unnecessary.

Girls Out Late by Jacqueline Wilson

This was my first time reading this book, so I wasn’t sure what to expect. I hoped that it would at least be better than the previous one. The final book is a bit more of teenage melodrama. There are lots of breakups, fights, misunderstandings, and tears. I can’t say that I was particularly happy about how it ended but it was at least an improvement.

Our Souls at Night by Kent Haruf

This was the book that my new book club chose for June. I’d had a copy of it for a really long time so I was super happy about it. I was pleasantly surprised by how good it was. The language is simple but incredible. It doesn’t feel like a lot is happening but this is such a deceptive book. I was really glad that I finally got the push to read it.

This was my only audiobook this month and it was about as good as it could get. I’ve been a fan of Adam Buxton for a long time and I was as excited about his upcoming book. The fact that it was released early in audiobook form was the best lockdown news imaginable. Add to that, the fact that he recorded it himself at home and you have one long rambly podcast of a book. It’s a brilliant thing and I’m so glad that I listened to it. I also can’t wait for the physical book to finally be released too. Of course, I’ve preordered a signed copy for myself.

I needed a really quick read to review and I’d had a copy of this for ages. I’d also just finished rewatching all of Game of Thrones and was in the mood for some more George RR Martin writing. Only the idea of rereading any of ASOIAF right now just filled me with dread. They’re so long. Unlike his 80s children’s story. Despite what some editions may tell you, it’s not set in Westeros but there are definite links to his well-known series. There are dragons, there’s ice, there’s fire, there’s a young girl. It all sounds quite familiar. 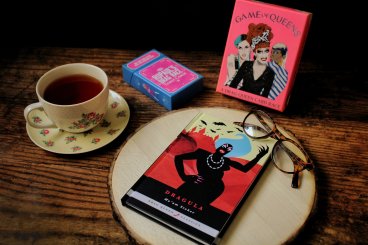 This was another case of needing to read something quickly. I bought this around my birthday and was hoping that it would be a bit of fun. Like those parody horror versions of classic novels. This had some great potential to be really great. Unfortunately, it was all just a bit pathetic. A massive disappointment.

It's that time again. Happy Folio Friday.
I know what you're going to ask: Did I really buy a second copy of this book so I could get this limited edition vinyl?
QUESTION: What are you reading right now?
BOOK REVIEW: No One is Talking About This by Patricia Lockwood
BOOK REVIEW: You Know Me Well but Nina LaCour & David Levithan
QUESTION: What are some of the books on your TBR?
Are you ready for me to spill some piping hot tea?
Another Folio Friday and I can't wait for the weekend to begin.
Blue and yellow books in Summer only, right?