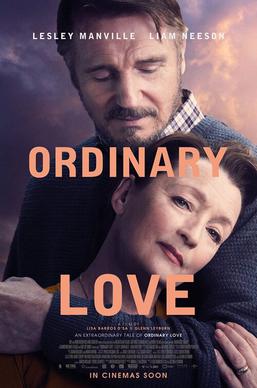 In December 2019, I listened to an episode of Mark Kermode’s podcast where he was talking to Lesley Manville and Edgar Wright. I’ll admit, I was mostly listening because of Edgar Wright but I’ll never be upset to hear from Lesley Manville. She’s an amazing actor and generally just seems wonderful. She was talking about the release of her new film and it sounded amazing. Terribly sad, obviously, but amazing. In her interview, Mandville told Mark Kermode that the film embraced the humour within the story and brought the humanity to the fore. I never got around to watching it when it came out but I was always interested in seeing it. It’s probably not the most uplifting thing to be watching during the Coronavirus pandemic but Lesley Manville promised that it wouldn’t be all doom and gloom. I feel like I can trust her.

Ordinary Love is a really understated film that kind of snuck into the world without making much fuss. It’s a very low-key affair but this is hardly an ordinary film. Written by Irish playwright Owen McCafferty, the story is insightful, funny, and incredibly moving. The narrative follows the lives of a middle-aged couple as they deal with a breast cancer diagnosis. We see how they both cope with the unexpected news and how it turns their lives upside down. At the same time, it is the story of a couple who have already survived the loss of a child trying to come to terms with potentially being torn apart forever. It is a very personal story and will definitely strike a chord with audiences all over the world.

Tom and Joan are an incredibly strong couple who have gently settled into a happy marriage. They bicker and joke with each other but there is definitely love there. Their insults coming from a place of familiarity and love that can only be associated with a long marriage. Joan is encouraging Tom to live a healthier life and the pair have taken up walking every day. Same route every day. The pair make it to a tree and turn back for home. It’s sweet to see these bits of their routine play out throughout the story. It’s also sweet to see Tom pushing back every so slightly. Indulging in beer, questioning her methods (“How does the Fitbit know you’re walking?”), and having fun with her. They not only feel like a real married couple but the kind of couple that you want to be.

Although, everything threatens to fall apart when Joan finds a lump on her breast. She’s understandably worried but Tom reassures her. It’ll probably be nothing but, even if it is, he’ll be with her every step of the way. Of course, this proves difficult. Not only are there moments when they physically can’t be together but there are moments when the pressure gets to them. Tom asks questions that Joan thinks are inappropriate and Tom refuses to go along with Joan’s insistence that their dead daughter doesn’t find out about her diagnosis.

The thing that makes Ordinary Love both so wonderful and so soul-destroying is its pinpoint accuracy. Owen McCafferty wrote the screenplay after his wife was diagnosed with cancer. You feel his experience in the minute aspects of the story. The medical procedures, the waiting in the hospital, the seemingly tiny moments that threaten to derail everything. It might feel like a quiet and held-back film but this is full of truth and suffering. The sounds of the hospital, the quiet, emptiness of their home, and the difficulty in maintaining their routine, it will resonate with plenty of people who have been through something like this. We see the real drama that plays out. Like the scene in which Tom pops to the toilet as Joan is waiting to be called. It’s genuinely tense while you wait to find out if he makes it back in time.

What is so wonderful about this film is that it takes you to places that many other films won’t. This film goes into all of the dark and depressing recesses of living with cancer. You get to see how emotionally wrung out both Tom and Joan are but how hard they are trying to get by. Joan has to live with chemotherapy and all of its side effects. We see the harsh realities that follow her sessions as Tom is left hopelessly washing the basin she was just vomiting into. His secret tears and show of strength. The pair are pushed to breaking point as they argue in public, in the car, and at home. Neither knows how to deal with this and neither can prepare for what might happen if the worst were to happen.

The film isn’t simply a happy and uplifting look at a marriage overcoming the most desperate odds. It isn’t willing to brush the unsavoury parts of this story under the rug. There are lovely and uplifting moments, of course, but Ordinary Love doesn’t pretend to be a fairy tale. Instead, it shows you behind the scenes. What keeps the film going is the lead actors. Both Liam Neeson and Lesley Manville both offer strong performances and definitely bring the human emotions into it. As the pair face the reality of breast cancer, you begin to realise that their past grievances are still weighing them down. There is more to their sedate routine that perhaps meets the eye. Their daughter died and it feels as though the couple never came to terms with it, so how will they cope when facing another potential loss?

Ordinary Love is as good a film as Lesley Mandville and Mark Kermode had prepared me for. It is full of human life and the terrible reality that is often associated with that. It is a monotonous and repetitive film but it is engaging. Both of the leads are amazing and you follow them every step of the way. They are both so subtle and heartbreaking in their own way. This is a film that manages to capture the balance between the mundane and the life-changing moments in life. The pair are trying to come to terms with some of the greatest mysteries in life in an incredibly normal way. They aren’t great thinkers trying to find the answer to everything but ordinary people facing the reality of life, death and love. This is a beautiful film and one that rings so full of truth. It’s powerful stuff.