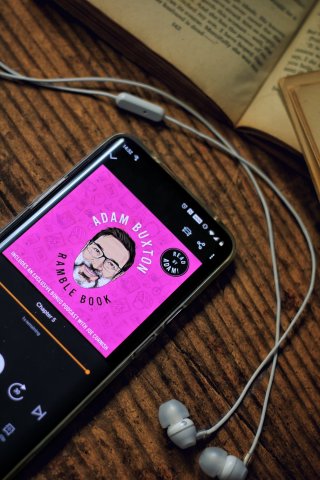 I’m an avid listener of Adam Buxton’s podcast and I have been eagerly awaiting the release of his new book. He’s been banging on about how hard it’s been to write for ages, so I was worried that we’d have another George RR Martin on our hands. But he did it. The book was finished and it started appearing on book sites. Obviously, I’ve preordered a signed hardback of the book for when it’s released in August but, thankfully, Adam Buxton is a really nice man.  He decided to produce the audiobook version himself so we all had something to listen to in quarantine. I used my Audible credit to preorder the audiobook and waited for its release. It took me a while to get through it because I started it on a bit of a whim. I couldn’t sleep one night and decided the only thing that would calm me down was listening to something. Then I had to finish the other books that I was reading before I carried on. But I got there eventually and, thanks to a bit of desperate listening this week, I finished it in time to review.

Adam Buxton is best known these days for his ramble chats with various famous faces on his podcast. The structure of the episodes tends to be a slightly stream of consciousness conversation with someone that can delve into everything. His debut book is fittingly rambly and the main narrative is constantly broken up by asides and distractions. These not only give the book an absolute feel of Adam Buxton but also work incredibly well in the audiobook format. It allows his comedic style to flourish and gives him the chance to work through his feelings without getting too intense. You get the feeling that this turned into quite an important therapeutic exercise in the wake of his loss. The funny elements and ramblings make sure that the book stays light-hearted enough.

Because there is a ghostly figure haunting Adam Buxton’s debut book. His father Nigel, best-known to Adam’s fans as BaadDad. Nigel Buxton died in 2015 aged 91. He was living with his son at the time of his death and much of the book is focused around the comedian’s grief. The book aims to look back over the father/son relationship over-the-years as he wonders if things could have turned out differently. The main narrative takes the form of a memoir where he takes us through the key years in his life. We are introduced to the important people he met along the way and the pop culture that was such a massive influence on him. It will all seem vaguely familiar to anyone who has followed his career for a while but that doesn’t make it any less engaging or worthwhile.

There will also be plenty of people out there who will wish that the book touched more on his career with Joe Cornish and their jump into late-night television. I admit that I love the two of them together and my favourite podcast episodes are the annual Christmas ones. However, I’m glad that Buxton stopped his book before the duo really got going. This book needed to be about Buxton himself and it needed to be about his father. This book was never supposed to be a history of the Adam and Joe show. It was always meant to be about the man himself and how he became the person he now is. To give over a large chunk of this book to his time as half of a television pair would have diminished him too much. Instead, he gets to be truly himself. You only feel Adam Buxton throughout this book instead of Adam and Joe.

Of course, we can’t be sure how this audiobook would have turned out had it been produced as originally intended but I suspect that lockdown actually did it a massive favour. Leaving the recording and editing to Buxton himself gives the book a familiar feel to anyone who is familiar with his podcast. The chapters are introduced with jingles created by himself or his friends. The rambling asides are recorded in the same way as his podcast intros during a walk with his faithful dog Rosie. The audiobook feels very much like a Buxton product and I’m not it would have had the same feel with input from other people. The recording sells the work. It makes sense and he feels comfortable.

This is essential considering the topic the book is covering. Though the majority of the book is a fairly light-hearted look back on the years of his youth, there are plenty of moments of sadness. The book focuses on Buxton’s feelings of regret about the relationship he had with his father and a sort of anger about the way his father handled certain things. There is no doubt that Adam loved his dad and his loss is felt throughout the book. There is some criticism of his father but there is nothing but respect and appreciation for him. You come out of the book both glad and sorry that Nigel wasn’t your father. He was a difficult man but his desire to do the best for his children is very clear. What you get is a very relatable retelling of a fraught relationship between a man and his father. Buxton has written something funny and engaging but it also full of raw and real emotions. It was lovely to listen to something so authentic and understandable