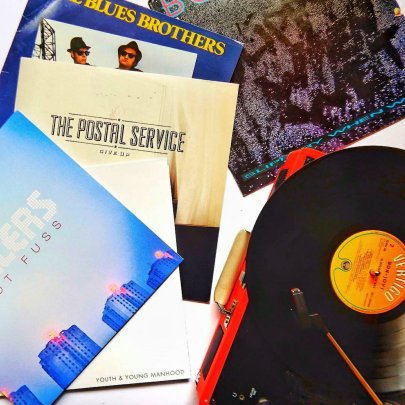 You’ve probably seen that Bill Clinton Swag thing going around Instagram, right? You’ve probably even been tagged to do it. Well, yesterday some absolute bastard tagged me to do it. Now, I’m a very indecisive person. Although, I’m not actually sure I’d describe it as indecisive. I just don’t like the idea of ranking the things I like. Why should one thing be superior to the rest? It depends on the context. Why is everyone so obsessed with finding out what my favourite book or film is? I have loads. I love Goodfellas but it’s not the kind of film I’m going to want to watch all of the time. I love The Monk but it can be a bit much to read at times. That’s why we have collections. But I decided to try and play ball and it was going well until I was thrown another curve ball. Another friend made a point about everyone picking male artists and I realised I’d picked 4 albums by male artists. So, I went back to the drawing board to make it more even. But I still had too many to decide between. At least it gave me a Friday Favourites idea. I had to limit myself or I’d have been here forever but I think this is a pretty cool list.

I know a lot of people might be tempted to pick The Rise and Fall of Ziggy Stardust and the Spiders from Mars because it’s a fantastic album.  I just prefer to listen to Hunky Dory. It’s a happier and easier album. It also features some of my favourite Bowie songs. ‘Oh! You Pretty Things’, ‘Changes’, ‘Life on Mars’ and ‘Andy Warhol’ are some of Bowie’s greatest songs.

There is an argument that Joan Jett’s first album is a little watered down or held back but it’s still an absolute classic. There are some fantastic songs on here and it really showed that Jett was more than capable of going for it on her own. The songs might be a bit tame and simplistic but that doesn’t mean they aren’t good. This is a cool album.

The Boatman Calls by Nick Cave and the Bad Seeds

To start with, I have to say that my favourite Nick Cave song isn’t even on this album. ‘There She Goes, My Beautiful World’ isn’t just one of my favourite of his songs but one of my top songs ever. But there is something so fantastic about this album. It’s stripped back but so unmistakenly Nick Cave and the Bad Seeds. It was such a departure from their previous work but it is so beautiful. It’s also another album that I can happily listen to from beginning to end. It’s poignant and sombre and his voice just makes it work.

Is this the best Sparks album? Probably not. Is it my favourite? Yes. This album is so much fun and there are some crackers on it. ‘Suburban Homeboy’ is an obvious standout but it doesn’t end there. All 12 songs on that album are worth a listen and bring something different to the table. This is the kind of album that just continually brings joy. But I guess you can say that about so many of their albums too.

Hounds of Love by Kate Bush

How could you not love this? It’s got so many great songs on it. This is classic Kate Bush. It’s got drama, emotion, romance, and weirdness. It’s the kind of album that really stands out from the rest. Bush is such an original talent and her work on this album is fantastic. It’s slicker than some of her other offerings but still offers that wildness we associate with her.

Janelle Monáe is an absolute queen. I almost didn’t include this on my list because it’s such a new one but this is some good stuff. It’s stuffed with special guest stars but is pure Janelle. It has a beautiful mixture of art and pop that makes is so easy to listen to. It’s not like anything else you’ll hear these days and it’s all aided by her tremendous voice. It might seem a little tamer than her previous work but I love it.

Frank Turner is one of those fantastic singer-songwriters who just makes songs you want to listen to. This album, in particular, is full of absolute belters and it all comes from him. His debut solo album was good but this one just upped the ante. It was the same kind of stuff but stronger and with even more emotion. These songs will never get old.

Okay, this isn’t an album but I hope you’ll let it go.

I’ll be honest, I’m not a massive Johnny Cash fan. I’ve nothing against him but I never really got into him. I tried really hard to listen to his albums when I was younger but I couldn’t quite get beyond ‘Ring of Fire’. It was years later that I heard his 81st album. It’s phenomenal. Cash was in his 60s at the time and his voice is just amazing. As men get older their pitch tends to get higher and there is a hint of this in Cash’s performance. Your vocal cords get stiffer as you age and it can cause your voice to get rougher. That obviously happened to Cash to some extent but it makes all of the songs an extra something. His cover of ‘Hurt’ is one of the most beautiful things I’ve ever heard.

Youth and Young Manhood by Kings of Leon

Now I know that most people would say that Kings of Leon’s debut album isn’t as good as their subsequent releases but those people are wrong. They have some pretty decent singles but they also feature a load of duds. Their first album is full of winners. It’s one of the few albums I own that never dips in quality. I can listen to it all the way through and be completely happy. It’s not as slick or adventurous as their later albums but it flows so well. I just love going back to this one.

Briefcase Full of Blues by The Blues Brothers

When I was a teenager, I went through a pretty heavy blues period thanks to The Blues Brothers. It had such a great soundtrack that I had to research the artists I didn’t already know. What happened was that I fell in love with B.B. King, Robert Johnson, Cab Calloway, and anyone else I could find. I’ve calmed down a bit over the years but I still enjoy a bit of

Give Up by The Postal Service

I love Death Cab For Cutie but listening to them too much leave you a little deflated. They tend to favour the more sombre kind of feel to their music, which is great in certain situations. Could I have picked a Death Cab album for this list? Yes. Eventually. I can never decide which one is my favourite. It’s probably Transatlanticism but I also really love The Photo Album. But that’s beside the point. I think Death Cab is definitely Ben Gibbard’s better work but I enjoy listening to his side project more. It’s lighter and has more of a pop feel. I realise this isn’t necessarily a good thing but it does make it easy to listen to. This is another strong album from start to finish.

Whatever and Ever Amen by Ben Folds Five

I love Ben Folds Five. I’ve loved them for a long time and it’s not something that’s going to end any time soon. The music is so much fun and such a joy to listen to. There are plenty of albums by the band or by Ben Folds himself that I could have chosen, so why did I pick this one? It’s just such a great selection of songs. It’s another that has very few misses on it. I think I pretty much love every song on the album. Plus, it starts out so perfectly.

A Christmas Together by John Denver and the Muppets

I know that this is a Christmas album so you can’t really play it very often but that doesn’t mean it can’t be part of this. I look forward to listening to this album every year because it’s a thing of beauty. John Denver’s voice is beautiful and the Muppets are a joy. It’s everything you could want during the festive season.

Back in Black by AC/DC

I liked to think of myself as a rock chick when I was younger but it basically just involved listening to AC/DC a lot. There’s nothing wrong with that but I was the wimpiest and quietest teenager ever. Hardly the rebel I thought my musical tastes made me. As far as AC/DC albums go, Back in Black is pretty flawless. It was their first after the death of Bon Scott but this came together. Yes, the other albums might feature some of their most well-known songs but they also feature some duds. This is their must listen to album.

Hot Fuss by The Killers

Speaking of albums that are 100% good songs… I love listening to Hot Fuss through from start to finish and I’m not the kind of person who will do that very often. I like a mixture of random things. I’m a Spotify playlist kind of girl. And my playlists are curated at all. It’s just the songs I currently like all jumbled together. But The Killers debut album is solid. They also got a bit dodgier as they went on. Maybe individual songs got better but more of them got more forgettable.

One thought on “Friday Favourites: Albums”

"My poetry is not dedicated to the foolish
"The trouble with you and me, is that we don't live in the real world. We dream of fantastic things that may never happen."
QUESTION: What are you currently reading?
QUESTION: Have you read this one?
BOOK REVIEW: The Reader on the 6.27 by Jean-Paul Didierlaurent
Of course I'm going to read this book in September. It'll be one of the books I take on holiday with me. Along with a few of my other September pre-orders.
QUESTION: Which is your favourite Agatha Christie novel?
QUESTION: What are you currently reading?
BOOK REVIEW: Endless Night by Agatha Christie