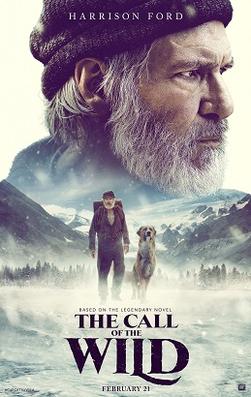 I read a headline recently that suggested that The Call of the Wild marked the return of the dog film. I wasn’t entirely convinced about how good a thing this was. There have been plenty of great dogs in films but films about dogs aren’t always that great. For every Homeward Bound, there are about 10 Snow Dogs. For every Beethoven, there are 7 increasingly dreadful Beethoven sequels. Then there’s the fact that dog films always like to give their canine protagonists the powers of thought and reason. They have to anthropomorphise them to a certain extent to create a story and make the audience really care about them. You can’t just have an animal following its natural instincts. What would the children do when faced with a fluffy creature ripping apart a rabbit with blood dripping from its fur?

If there’s one thing we could be certain of going into The Call of the Wild it’s that teaming Harrison Ford up with a furry partner has really paid off in the past. Yes, a dog isn’t quite as much fun as a Wookie with a crossbow but it’s pretty close. This isn’t the first time that Jack London’s 1903 novel has been adapted but it is the first time it’s been adapted using a CGI dog. Yes, because it wasn’t possible before but still. The decision surely had something to do with ease. Trying to get a real dog to do everything that was required would surely have been a bit much. Does having a CGI animal star harm the film? Yes, to some extent. It’s difficult to ever really see the dog as a dog. It’s all a little uncanny and incredibly anthropomorphised. Something that is even more off-putting considering this is a story about a dog reverting to his beastly instincts.

The film does a pretty good job of realising London’s novel but, as you would expect, completely avoids all of the awkwardness about Native Americans. To make this film family-friendly, much of the violence and primitivism has been removed. However, all of the major points are there. Buck lives a great life as the spoilt and unruly pet of a judge in California. Until he is dognapped and taken to the Yukon. There he is sold to become the newest member of a dog sled team that is tasked with delivering mail to the furthest reaches. Buck quickly adjusts to his new life and becomes a key part of the team. Unfortunately, the group is then sold on to a trio of clueless gold hunters who lead them all into danger. Buck is saved by John Thornton (Harrison Ford) who is mourning the death of his son. The pair are drawn to each other and become firm friends. But what will become of their friendship when Buck finds himself further drawn to a life in the wild?

I’ll be honest, it’s a pretty sweet film that owes an awful lot to Harrison Ford. His is a quiet and subtle performance that still manages to convey plenty of emotion. Ford also narrates the film, which is a great call considering his calming, growly tone. He’s also perfect in the role of John Thorton. His grizzled exterior does nothing to hide the sadness in his eyes. We know that Thornton is a man haunted by his past and it’s lovely to see him change in the presence of his four-legged friend. Although, there is still something a little hollow to it all. An awkwardness that comes from watching a great actor pretending to pet a dog that doesn’t exist. You know that he knows it’s not real and it starts to feel a bit weird.

Yes, the digi-dog gives a complex and funny performance but it’s not the same. It’s not that the CGI is bad but that it’s there in the first place. There’s a lack of connection between him and the audience. Although, it does provide a lot of exciting moments. Some of the finest sequences in the film revolve around Buck’s time as a sled-dog. Watching the team race their way across the snow is exhilarating. There’s a terrifying walk across some ice that is quickly followed by an avalanche. You can see why CGI worked better and these are the times you’ll be glad they made the choice. Then Buck will do something distinctly undog like and you’ll once again be annoyed that the decision was made.

The Call of the Wild got into trouble early on when some big executive made the decision to make it a PG film. Not only did that mean a huge change in tone from the original novel but also a need to amp up the magical qualities of the dog. It’s not quite as bad as fucking War Horse but there are still plenty of moments when you expect Buck to talk to the camera. The film isn’t terrible but it definitely dilutes the overall message of the story. We’re supposed to watch as Buck starts to revert to his base animal instincts but the film can’t really show us. The wild of the title ends up being a little too tame. Still, it’s a beautiful enough film with a strong performance from Ford. It won’t set your world on fire but it’ll keep you entertained. Of course, that could partly because of how awful and hammy Dan Stevens ends up being.

How many books have you read this month?
I loved All My Friends Are Superheroes by Andrew Kauffman that I bought another of his books. The Tiny Wife sounds just as quirky and enjoyable as that one so I have high hopes.
Happy Folio Friday everyone!
I listened to the audiobook of The Pursuit of Love narrated by Emilia Fox. I'm not normally a fan of actors doing audiobook narration but I've always enjoyed listening to her. She added to the humour and general tone of the book.
Today @readingkitty tagged me to show off my last, current and next read. I quickly cobbled this together before we lost the light.
“The appeal of reading, she thought, lay in its indifference: there was something undeferring about literature. Books did not care who was reading them or whether one read them or not. All readers were equal, herself included. Literature, she thought, is a commonwealth; letters a republic.”
Finally finished this yesterday. I decided to get the audiobook version because of how bad I've been at reading lately. I think it was a pretty good recording. Narrated by Emilia Fox. It certainly wasn't as bad as some of the Audible narrators that you get.
I'm really not have a good reading month. I've only just finished The Pursuit of Love today and I still have 3 letters to cross off my February TBR. I'll go back to Rainbow Milk today and then Yellow for Y. I'm struggling to decide what to pick for B though.
Do you enjoy film/television novelisations?