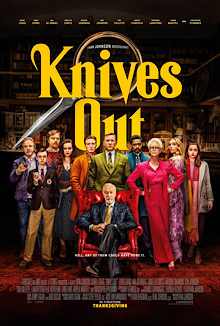 Just when you think Chris Evans can’t get any better than beardy Captain America in Infinity War, we get Chris Evans in knitwear Now, I’ve always been a huge lover of knitwear because I’m a secret grandma. What I didn’t expect was for knitwear to be quite so sexy but Rian Johson clearly saw that as a challenge. Therefore, we have ourselves an original and exciting new Hollywood film that also features some of the hottest knitwear scenes ever. And I say that as someone who once bought my friend a book of sexy knitting projects. I’ve spoken a lot about Oscar snubs recently but the biggest one by far is that the costume department on Knives Out didn’t automatically walk away with the win for making Chris Evan’s cable knit an internet sensation. No offence to the actual nominees but none of them have made quite the cultural impact that whoever first pick up that cream jumper has done.

One of the major arguments that is constantly circling around Hollywood is that the only films you see these days are sequels, remakes, reboots, or adaptations. It’s somewhat true but, thankfully, filmmakers like Rian Johnson are still here to show us how it can be done. Yes, that’s Rian Johnson who was last seen dividing the Star Wars fandom with The Last Jedi. Now he’s back with his own whodunnit story that feels like a modern Agatha Christie story. Oh god, does that mean the Knives Out is something of a reboot too then? Best not carry on down that road.

With Kenneth Branagh’s underwhelming and unnecessary throwback to classic murder mysteries with his adaptation of Murder on the Orient Express, you’d be forgiven for thinking that there was no room for an Agatha Christie-style crime story in modern Hollywood. Rian Johnson’s Knives Out is ready to show you how wrong that idea is. This has the feel and format of a classic whodunnit but it is firmly set in the modern world. Meaning it manages to feel both fresh and nostalgic at the same time. Though it has the familiarity of a cosy crime novel, there are topical references to politics, pop culture, and modern technology. This isn’t your average Poriot.

Of course, it’s all set up in much the same way. When the father of a rich but unstable family is found with his throat cut, the extended family and their employees are gathered in the imposing mansion where he died so the investigation can be carried out. Then an eccentric but brilliant detective meets with them individually and works through the clues until he solves everything. It’s the sort of set up that we’re used to and brings a claustrophobic intimacy to proceedings. There are plenty of dark corners and squeaky staircases around to amp up the tension and make everyone feel a little uncomfortable. Our setting is an intimidating gothic structure in New England and is full of suitably creepy interior design choices. From the chair made of knives, the suits of armour, and the creepy gargoyles. This is the kind of home that was just waiting for a good death.

And it certainly gets one. After celebrating his 85th birthday, successful crime novelist Harlan Thrombey is found with his throat slit. The police are about to pronounce the death as suicide until private detective Benoit Blanc turns up having been hired by a mysterious stranger. Blanc gathers Harlan’s family and employees at the house so he can interview them all. This includes his daughter, Linda, and her husband; his son, Walt and his wife and son; his daughter-in-law Joni and her daughter; and his grandson, Ranson. All of the family had been heard having altercations with Harlan before he died. All corroborated by his personal nurse, Marta, who was Harlan’s closest friend. Marta has an interesting personality quirk of vomiting when she tells a lie, which makes her Blanc’s ideal crime solving buddy. Is there really something dodgy going on? Can Blanc and Marta uncover a killer in their midsts?

Knives Out is a really entertaining film. It takes you on quite a journey and you’ll definitely have fun getting there. The cast is amazing. Daniel Craig is absolutely hilarious as Benoit Blanc and that accent is just incredible. If Chris Evans hadn’t spent so much time in knitwear, it would have been the greatest thing about the film. Ana de Armas is utterly adorable as Marta and manages to carry the majority of the film on her shoulders. She’s wonderful. As are the rest of the cast. I’d go through them all individually but we’d be here for hours. There are a lot of big names here.

Maybe too many. Knives Out is a very heavy-handed film and it could do with a bit of refinement. There are so many key players here but most of them feel unnecessary. They never get much to do. Knives Out tries to do too much. Take the social commentary of the narrative. It’s anything but subtle and it ends up distracting from the action. Marta is a South American nurse who has managed to infiltrate a rich, white family. They constantly tell her that she is part of their family but their actions prove otherwise. We get it, it’s about America. Maybe try and not beat us over the head with it?

Rian Johnson has spoken about subverting genres within his films throughout his career. Clearly, when you’re dealing with a traditional genre there is an expectation about what you’re about to see. Playing with those expectations should make it easy for someone to surprise you. The problem is, when something has been so overdone as the murder mystery, we’ve learnt to expect the unexpected. Viewers are so shrewd these days that it’s difficult to confuse. As much as I enjoyed the film as a whole, I can’t say that I was blown away by the mystery itself. The problem with trying to hide a twist is that you run the risk of making that twist incredibly visible. If anyone is immediately made to seem guilty then it’s unlikely that they are and vice versa. The outcome of this film is the biggest disappointment. It’s done to keep the film within the conventions of the genre but it just feels timid. A film that feels so fresh deserves to go out with a bang. Knives Out went out with a whimper.

Thought I'd post a simple birthday book haul. It's not very big in terms of number of books but this is one huge volume.
It might not actually be Friday but that doesn't mean we can't still celebrate Folio Friday.
What you probably can't read on that badge is that today is my birthday.
Happy World Book Day, chums!
She's finally here!
This week is Eating Disorder Awareness Week in the UK, so I wanted to share a book that really helped me when I was younger. I know Jacqueline Wilson gets some stick these days but this book meant so much to me as a teenager.
Who is your favourite Welsh writer?
How many books have you read this month?
I loved All My Friends Are Superheroes by Andrew Kauffman that I bought another of his books. The Tiny Wife sounds just as quirky and enjoyable as that one so I have high hopes.