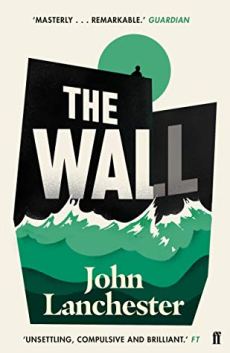 This is one of those classic cases of me being completely susceptible to marketing. There had been a poster advertising the paperback edition of this book at my train station. So, every morning on my way to work, I saw this book cover. I also saw the quote that described it as 1984 for our times or whatever. Well, it clearly worked because I had a huge urge to read this book. I didn’t really know much about it. But when it popped up in Amazon as a recommendation I had been conditioned enough to click on it. And it sounded great. I mean it took the Wall from Game of Thrones and added it to the modern world. I’m normally wary of dystopian novels because they tend to just be the same as each other. Nobody has written an original dystopian novel in years. I know there are plenty of people out there who will disagree but I haven’t been excited by one for ages.

The Wall introduces us to a world after the Change. Sea levels have risen and many people from around the world have found themselves without homes. Many are sailing around the world trying to find salvation. Britain has built a wall around itself to prevent anyone else getting in. The Wall is staffed by young people who have to get through 2 years service before they are allowed to get on with their lives. Everyone must go to the wall for their own term where they have to prevent the Others from getting into the country. This means young people learning how to kill and spending 12-hour shifts watching for the enemy. Our narrator, Joseph Kavanagh, has just started his stint on the Wall when the novel opens. We follow him through his time as a Defender and the experience the fear, anger, and stress that comes with it. Safe in the knowledge that any mistake could lead to his death, Kavanagh dreams of life after he’s done. But first, he has to get through the next 24 months.

The Others are desperate people from other nations who want to make a life here. They will do anything to get over the wall and many have died facing them. Society is so afraid of this happening that any breach is harshly punished. All the survivors are put on trial and anyone deemed responsible will be sent out to sea. Depending on the number of people who made it over the wall, the remaining company could all end up being banished from the island and left to fend for themselves in open water. Leaving them to the threat of pirates, Others, and Guards who work for the British government. Your best hope is that you never experience an attack or that you die pretty quickly. It’s a pretty grim existence.

The Wall brings together so many issues that are facing modern society. It deals with the aftermath of global warming, xenophobia, Brexit, the divide between generations, and the great class divide. Lanchester is saying, in a not very subtle way, that everything is bad. The problem is, there are so many things to complain about that nothing is ever explored. We learn something about the world of the book but it’s hardly fleshed out. I wanted to know more about the world beyond the world. I wanted to know more about civilian life. But Lanchester isn’t concerned about world-building. He explores certain themes but never takes them very far. There is a lot of potential with the idea that Kavanagh and his generation can’t stand being around their parents because they blame them for the Change. Yet, we meet his parents once and they are discussed twice more. It’s such a shame that the dystopian plot takes over instead.

If I’m honest, I’d have loved this novel if it had just followed Kavanagh’s life on the Wall. If Lanchester had decided to show what the world was like and the wider consequences for people. Instead, it keeps trying to amp up the drama and the narrative away in other directions. It just all gets a bit messy and further complicates things. Lanchester was trying to make a point about the direction that the world is going in but his story just raises more questions. And this all happens as he ignores some interesting topics. Like the question of children. The world is so fucked that very few young people want to have children. They know that they will be bringing children into a terrible world and condemning them to their own stint on the Wall. However, anyone who is willing to breed gets perks and is allowed to leave the Wall before their 2 years is up. The Wall needs people and that means babies. But that means the guilt of bringing a new life into a horrible society. It’s a great thread that never really goes anywhere.

I enjoyed the first third or so of this novel. It had so much potential and I was excited to see Lanchester’s arguments play out. It was clear that he had a point to make and the concept was a great way of doing it. However, it soon became clear that all of the intelligent arguments were being shoved aside by ridiculous fearmongering that played on hyperbole. It just lost all credibility and I stopped caring. It suddenly goes all Hollywood. I can imagine Gerard Butler being in a film version of the final third of the novel. That’s how bad it is. It’s such a shame. I can’t work out why this was on the Booker Prize longlist.

3 thoughts on “Book Review – The Wall by John Lanchester”

QUESTION: Do you have any books you read every Halloween?
QUESTION: what do you think about accents in audiobooks?
QUESTION: What are you currently reading?
BOOK REVIEW: Burn by Patrick Ness
QUESTION: What spooky books are you reading for Halloween?
BOOK REVIEW: Towards Zero by Agatha Christie
This wasn't a good day to take photos which is why they all look a bit murky and awful. It's a shame because this book look so spectacular in real life. The green is really vivid and the red details really pop.
QUESTION: Do you decide on your next read before you've finished your current one?
It's no secret that I've been super excited about this one but I just reckon it will be utterly delightful. Not only does Stanley Tucci just seem like a nice guy but he knows his stuff. This should be a fascinating read.