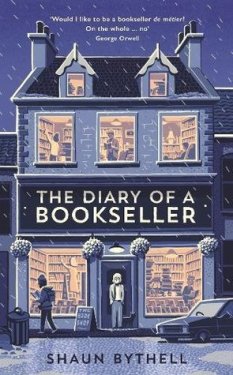 I imagine a lot, if not all, of bookish people believe that running a bookshop would be a dream job. For me, Black Books was the thing that convinced me. If I did own my own bookshop I’d want to discourage people from going in and ruining my fun. And by fun, I mean shelves full of books. I’m describing a library. But a library that has the ability to cause my financial ruin. Although I guess every bookshop has the ability to do that. In all seriousness, I think I’d do okay in a bookshop. I’m not as judgmental as I used to be which means fewer eye rolls when people bought certain books or authors. And it’s definitely a leas hands-on job than movies and TV would like us to believe. People going into independent bookshops mostly don’t want to chat. They just want to browse in peace. I could live with that.

My grandfather grew up in Dumfries and Galloway. His family are from Stranraer so we spent my childhood visiting South West Scotland every Summer. One of the major highlights each year was a trip to the Book Town. The Bookshop is like heaven. There are so many books. I could spend days in there and, if I don’t control myself, spend thousands of pounds. The Folio Society section alone would bankrupt me. Then there’s the huge supply of vintage Penguin Books to add to my collection. My family are the same. We’ll always leave having bought something. It’s impossible not to. It was on a visit in 2017 that we first discovered this book. We bought a copy from Shaun himself and we were all excited to read it. Who wouldn’t want a closer look at the life of a bookshop owner? Surely it would be days full of reading, recommending books, and chatting with customers.

Not according to Shaun Bythell. In 2014, the owner of a second-hand bookshop in Wigtown started a diary. It became a record of the weird and wonderful encounters he had with customers and the people who tried to sell him books. Bythell picks the most outrageous moments so he is able to provide cutting commentary on these perfect strangers. He’s often brutal and really judgmental of his customers. I suspect this was written from a place of humour but I’m not sure that Bythell is as funny as he thinks he is. My issue isn’t even that the comments are mean. I’m a lover of a deadly putdown. In Diary of a Bookseller it just feels as though the author is playing a part. The persona just doesn’t feel real. It reads more like a fictional account that has been far too influenced by George Orwell’s Bookshop Memories.

And it’s entirely probable that Bythell was a little too influenced by Orwell. He starts every new month with a quote from the essay. Maybe in an attempt to get people to associate his diary with the great writer’s own work. In reality? It just made me wish I was reading Orwell’s account instead. I think the diary itself is a great representation of life in a bookshop. It has the dull and repetitive nature of everyday work. Some might consider it boring but seeing behind the scenes was really interesting. And it helps that the book is set in such a great town. The kind of Scottish town that is full of great characters. I wanted more Nicky. I wanted more of the townsfolk. That’s where the most laughs were coming from.

As a whole, I didn’t enjoy the book as much as I thought I would. The reason for this is that I simply didn’t warm to Bythell himself. Again, this wasn’t just the fact that he can seem incredibly mean. I connected with that side of him. It was the other stuff. If I had to sum up my immediate reaction to this book it would be “okay Boomer”. Bythell seems so far removed from modern life and it means he ends up spouting a lot of nonsense. One of the worst parts of the book for me was when he reacted to The Bookshop being named in a list of best bookshops. He suggested that the rise of Hipsters wanting real books in their hands was putting bookshops in the spotlight. What a ridiculously out-of-touch thing to say. I was shocked that he didn’t start moaning about avocado toast and lattes as well. The fact is, ebook sales have never been as huge as people would like us to believe. Bythell moans about Kindles but, when you look at the numbers, that’s not to blame for his lack of customers. People have always bought physical books.

This book falls into 3 parts. The first being an in-depth look at the hardships of running a second-hand bookshop. The second is a look at a quaint and beautiful town in South West Scotland and its residents. The final part is a 50-something-year-old man moaning about modern life. Bythell is the definition of a Boomer. So much so that he’d definitely call me out for calling him one. Yes, we can all agree that Amazon is destroying small businesses. So, it seems incredibly stupid that, when people do decide to visit his shop, Bythell is still so arrogant and pretentious that he takes pleasure in deriding them. He has such an air of superiority about him. Just look at the moment when he discusses the difference between real bookish people and people who think they’re bookish but not. It’s pathetic. I know you don’t have to like a narrator to read a book. Reading some of his thoughts genuinely annoyed me. He’s not for me. The Diary of a Bookseller isn’t the first book about this and we can’t pretend that it’s the best one out there.