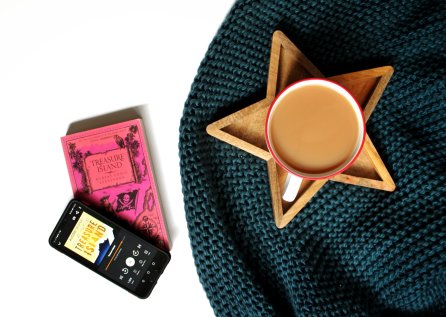 I’ve had an Audible account since 2011. Or at least that was the first time I added something to my library. It was Miranda Hart’s Joke Shop so it wasn’t even a book. Since then, I’ve added a further 46 titles to my library. However, I’ve not done a very good job of getting through them. So, it’s exactly the same as my real library but on a much smaller scale. I’m never sure if I get the most out of a book when I listen to it. If I listen on my commute, I get too easily distracted and miss sections. If I listen at home, I feel like I should be doing something else with my time. I know that there are people who read along but that just makes me realise that I read quicker than the narrator is speaking. But there week I’ve been on a bit of an audiobook binge. I got through one on Sunday, one by Monday night, and I spent most of Wednesday listening to one at work. I still think I need to be careful about the type of book I listen to but I am getting on board with them. In the spirit of this newfound love, I decided to showcase my favourite audiobooks.

How could I pick anything else? Stephen Fry is the king of audiobooks and I loved listening to these on cassette when I was younger. My whole family loved them. Harry Potter is such a magical world and Stephen Fry such a lovely and light touch to them. He is funny and dramatic at exactly the right moments. There is nobody else who could read these books as perfectly.

Listening to this as an audiobook read by the author himself was a whole different experience of reading it as a book. Neil Gaiman’s voice is the perfect thing to listen to and you can really tell how much he loves these stories. He brings his sense of humour to his reading and it really works with the madness of the original myths. It was an absolute joy to hear the author read his own words.

Lincoln in the Bardo by too many people to name

I’m not sure I would have enjoyed Lincoln in the Bardo as much if I’d finished reading it as a book. The all-star cast of the audiobook was fantastic and really brought the book to life. It’s such an incredible thing to listen to. The tale itself is sad but strangely uplifting. It feels like a very human story even though none of the main characters is actually alive. The audiobook only adds to this quality and I would recommend everyone listen to this book rather than read it.

Okay, so this is the second time Stephen Fry has appeared on this list and the second time that mythology has appeared on it. The Stephen Fry thing is an obvious one. Some people are born to read audiobooks and he is one of them. The mythology is a coincidence. Although, I do love reading about various cultures’ mythology. The Norse myths were insane but they have nothing on the Greeks. Those guys were fucked up. I love it. And hearing Stephen Fry talking about how many different animals Zeus turned into so he could have sex with innocent humans. Love it.

How Not To Be A Boy read by Robert Webb

I am now a firm believer that you should listen to the audiobook version of a memoir. Listening to the person themselves taking you through their life is a wonderful and illuminating experience. Robert Webb was able to dissect his past and look at how it affected him. He brought humour to it and added extra tidbits for the audio version. Plus, he brought an added weight to the emotional bits. If you love Robert Webb and want to read this book then don’t. Listen to it instead.

Speaking of people born to read audiobooks, Michael Sheen is the perfect narrator. My only issue is that he’s not using his Welsh accent. But this audiobook is not just about Sheen. The whole cast is perfect and the narrative is only made better by Jeff Wayne’s music. I absolutely loved this Audible Original. It was the reason I came back to the site. I needed to experience it and it didn’t let me down. If you love The War of the Worlds then you need to listen to this.

Another of my most recent audiobook experiences but it was fantastic. It was the one that kicked this whole thing off. I think the Audible original dramatisations of the classic books are wonderful and this had everything. The cast was well suited to their roles and managed to really bring the characters to life. This is such a great adventure story and the dramatisation had me hooked.

I listened to this audiobook a while ago but it’s always stuck with me. Heart of Darkness is a very dramatic book and Kenneth Branagh brings a great deal to his narration. He amps up the tension and really gets to grips with the damaged mental states on show. This is a classic novel and for good reason. Branagh understands the narrative and makes it an incredibly entertaining experience.

When you can't make up your mind about a book.
Making my way through The Bullet That Missed. I'm absolutely obsessed with this edition. So many pretty secrets hiding beneath the cover.
Just a few inst-buy writers. Which author will you automatically buy?
I've also recently found out that September is alopecia awareness so I'm trying to fit this book in before the end of the month. It's going to be tricky based on my current speed but I'll do what I can.
When I have face-to-face conversations about books, I end up sounding as though I've never read anything.
Let's be honest, any Folio society edition would work in this context.
Have you been watching The Rings of Power?
Last. Now. Next.
Vinegar Girl by Anne Tyler - enjoyable but not as good as I'd hoped.