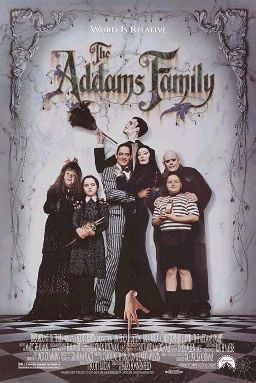 I must have seen Addams Family Values quite a while before I saw the first film. It was kind of disappointing after watching the sequel. It’s one of the few franchises where the second film is better than the first. Looking at the behind the scenes information, it’s clear to see why. The Addams Family was a troubled film. It went massively over-budget; to the sum of $5 million. This was mostly due to rewrites of the script. Many of which were being done as it was being filmed. There were other stressful issues such as health problems and difficulties for director Barry Sonnenfeld. To try and recoup their losses, Orion Pictures sold the film to Paramount. Despite all of this, the film was a commercial success and made way more than it cost to make. Something we should be really thankful for because it’s the only reason that we got the sequel.

The Addams Family was Bary Sonnenfeld’s first job as director. It’s safe to say that it wasn’t the best experience for him. He got the job after Tim Burton passed on the film. Unfortunately, it was a super stressful job and his wife became sick during filming. It wasn’t really a great time for anyone involved. Raul Julia, who plays Gomez, burst a blood vessel in his eye which meant problems for filming. Anjelica Huston was uncomfortable thanks to the procedure needed to get her signature look. With all of the behind the scenes stories about this film, it’s kind of amazing that it was finished at all.

And you can tell that there were major script problems throughout production. The script is all over the place and the ending is super rushed. In terms of story, there isn’t much there. Yes, there’s a secret plot to steal the family’s fortune but the film is mostly just a load of silliness strung together. There are plenty of sight gags and one-liners that fill the time in. At the same time, there are moments where you can’t help but feel that something funnier could have been included. There are situations that are crying out for some dark humour that just get passed up. It’s a weird and frustrating film.

Watching this film, you can’t help but wonder what Tim Burton would have done had he not passed. Burton did wonderful things with Beetlejuice and the Addams family could have done with that kind of treatment. But there are moments of gold here. Lines that will have stood the test of time and visuals that you won’t quickly forget. We should also thank this film for giving us Anjelica Huston’s Tish and Christina Ricci’s Wednesday Addams. Both of these women do remarkable things with their roles and really inhabit the characters. It’s why it was so difficult having other people play them in the latest film.

This isn’t the worst film out there. It has moments of greatness and black humour that delight audiences to this day. However, it doesn’t push things far enough. And it’s all a bit of a mess. The story is all over the place and it has very little in the way of intriguing plot. Watching this film just makes me wish that I’d watched the sequel. At least Joan Cusack brought some genuine darkness to our screens.