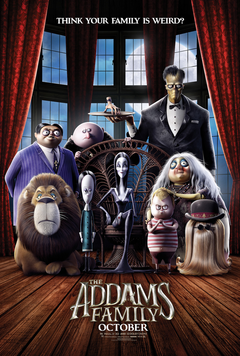 When we were children, our local newsagent used to rent films on VHS. On one of the occasions that my sister and I got to pick, we chose Addams Family Values and I loved it. I don’t know how many times we rented it but there were definitely multiple viewings. At the time, I didn’t really consider how super dark that film was. Obviously, I didn’t. I was a child. But going back to it as an adult is weird. It’s still a great film but there’s a lot of darkness. I mean Joan Cusack gets electrocuted by a baby. It’s all a lot of fun but it’s quite a lot for a children’s film, right? And who doesn’t immediately think of Anjelica Huston’s portrayal of Morticia? Surely it’s not right for someone to be quite so sexy in a family film? So, the announcement that there was going to be a new film was one of interest but fear. We know from Addams Family Reunion that bringing this family back is not always a sure thing.

The latest film adaptation of Charles Addams’ comic series is brought to us by Greg Tiernan and Conrad Vernon. They were the people who also gave the world Sausage Party. The animation itself is pretty good and really harkens back to the original 1930s comics. The use of animation allows for a lot more freedom when creating the creepy world of the Addams family and helps create an even greater contrast with the rest of the world. Bringing the family back to the animated world is definitely a welcome move and it leaves them plenty of room to grow.

It also helps that the cast of voice actors is such a great one. With Oscar Issacs and Charlize Theron taking the roles of Gomez and Morticia we really are getting some quality actors. Chloë Grace Moretz’s and Finn Wolfhard play the younger Addams and Nick Kroll takes on Uncle Fester. Does it take a bit of getting used to hearing these people in the roles? Yes, but only because the 1991 and 1993 films were such staples of my younger years. All of the cast do good jobs in their roles and certainly bring the family to life.

The problem is, the film feels like it’s missing something. There is something slightly off about everything. We’re used to Morticia being sexier than this, Wednesday being more ruthless, Fester being more outrageous, Lurch being more… Lurchy. They look like the characters we know but it feels like a watered-down version. The spookiness that made the characters so original and fun just isn’t indulged enough. I know this is a kids film so I wasn’t expecting it to be genuinely terrifying but it could at least have been weirder. The younger audience shouldn’t have meant diluting the main premise to this extent.

And what is even worse is that this film ends up being boring. We’re being delivered the same old plots that we’ve seen countless times before but in really dull ways. The idea of always being yourself is hardly a new idea but that doesn’t mean it has to be so forgettable. Yes, there are some funny moments but they are few and far between. This is a film that celebrates difference and standing out yet it conforms to every Hollywood cliche going. There is never any doubt about where this is going and it just descends into a frustrating saccharine affair. It’s all too on the nose. I can’t even be bothered to go over the plot because the thought of it is boring me to tears.

This might be a good way into the family for children who are not used to the family and their ways. However, if anyone watching has a history with the family, it’s unlikely they’ll get much out of this. Not even the amazing cast or the animation can save it.