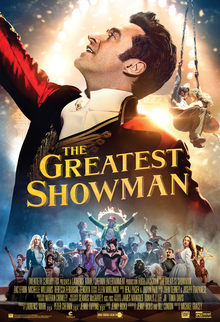 I was determined that I wasn’t going to like The Greatest Showman. The reason? A friend of mine said, with complete confidence, that he thought I’d love it. Now, anyone who read my review of Dunkirk will remember, I’m really stubborn. So, I decided that I couldn’t let him be right. Then, I went to a wedding. At this wedding, the DJ played the title song from this film. It seemed like a weird choice but whatever. The point was, a little girl was alone on the dancefloor performing the shit out it. She was dancing, singing, and giving it her all. It was the funniest, sweetest, and weirdest thing I’ve ever seen. Obviously, we all clapped when she was done but, as you’d expect, that only encouraged her. So, she kept trying to get the same attention for the rest of the night. Unfortunately, I was one of the only people paying any attention to her. I mean how could you not? She was hypnotic. However, it did mean she was performing to me for most of the time and it scared the shit out of me. You don’t know fear until you have a 7-year-old girl staring into your soul whilst singing popular songs. Still, I got over the experience and was left with a strange desire to finally watch the film. That’s how haunting that girl’s performance was.

There’s been something of a musical revival recently. I’m saying it’s because of Hamilton. Lin Manuel Miranda has shown people that musicals can be cool and modern. The Greatest Showman feels like an attempt to mix a traditional musical with something a bit more modern. On the one hand, you have Hugh Jackman and his absolute love of singing and dancing. On the other, you can detect slightly contemporary feel to parts of the score and choreography. It really does feel like a film that is trying to please everyone. And please itself. This is the kind of film that does what it wants and to hell with everyone. It’s cheesy, saccharine, and over-the-top. But, then again, it is based on the life of  Phineas T Barnum so it’s quite fitting.

P.T. Barnum made a living from promoting curiosities and hoaxes. Barnum saw himself as a showman instead of a conman. The Greatest Showman portrays him as a champion of equal rights. Barnum, played by the always charismatic Hugh Jackman, brings together the people who are normally shunned by society and showing the world how brilliant they are. I’ll be honest and say that I don’t know a great deal about P.T. Barnum but I do know enough to be able to say that The Greatest Showman kind of dumbed him down. In favour of putting on a show that the man himself would be proud of, the film ignores some of the more interesting aspects of his history.

I can see why people like it. There isn’t really anything that you can hate. It all feels very safe. For the most part, the songs aren’t going to stick in your head but they also won’t make your ears bleed. The cast all do good jobs with the cliches they are given and there’s even a romance that breaks down racial stereotypes. However, there just isn’t enough that makes the film spectacular. It feels bloated in places but rushed in others. It’s a weird mix of film. It rarely does anything utterly mesmerising but, equally, it rarely does anything utterly abysmal. It’s not possible to hate it but it’s not the kind of film that will have you running back for multiple viewings.

But, this is a film that is meant to put on a show. It doesn’t matter how the story is told or why. It’s about trying to entertain. Which is why Hugh Jackman is so perfect in the lead role. This film is filled with a different kind of energy when he’s performing. The lowest points come during his absence. I’ll be honest, if he hadn’t ben part of the show, I doubt I’d have got all the way through. I could watch that man singing and dancing in any situation.

One thought on “Throwback Thursday – The Greatest Showman (2017)”

How could I not? It was 2 for less than the price of 1!
BOOK REVIEW: Tyger by S.F. Said
I loved this. It's bound to be a classic.
If all goes well this month, I'll finally cross this off my TBR. Of course, the chances of it going well are pretty slim if my past behaviour is anything to go by.
My negative reviews sometimes get quite brutal. I have to learn to control myself a bit.
Isn't this just beautiful? I can't wait to read it. It sounds so good.
This sounds amazing. Of course, I say this about every new book that I buy. They all end up just sitting on the shelf like all the others.
What are you reading this month?
Justifying every new addition to my TBR.