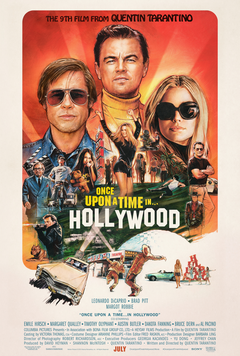 I’ll be honest, I’m not a Quentin Tarantino fanboy. Actually, no that’s not true. I love a bit of Tarantino but I do think he is a bit overhyped. Pulp Fiction is a great film but is it really one of the greatest films ever made? I don’t think so. Is it one of the most overrated films ever made? Quite possibly. Yes, it inspired a generation of filmmakers and spawned countless copycats. The problem is, in the cold hard light of day, Pulp Fiction just feels kind of juvenile. It’s one of those too cool for its own good kind films that everyone sensationalises. In Mean Girls terms, Pulp Fiction is Regina George. Pulp Fiction is possibly one of Tarantino’s most indulgent films. He, like Spielberg, is very good at standout scenes but, below the surface, it’s kind superficial. So, I’m always a bit wary of Tarantino. But, I have enjoyed his films more and more as the years go by. And I was excited to see what he would do with this film. It’s such an iconic time in history and Tarantino taking on the story of Sharon Tate’s murder was always going to be interesting.

Once Upon a Time in… Hollywood is either Tarantino’s last or penultimate film depending on what mood he’s in these days. Or how well it goes. Or whatever. I don’t know. What I do know, is that if this were to be his final film it is the perfect one to go out on. OUATIH is a dark comedy that takes you on an unexpected journey through one of Hollywood’s golden eras. It is both very Tarantino and not Tarantino in equal measure. It’s the kind of film that Pulp Fiction fanboys won’t like but I defy anyone who really loves cinema to come out not liking it.

We are taken back, in dazzlingly warm colours, to 1969. The era is meticulously recreated thanks to Tarantino’s acute and possibly obsessive knowledge of pop culture. We all know Tarantino’s intense feelings about cinema because, well, it’s hard to miss. But this film manages to bring together so many things that he is passionate about. This film is Tarantino, so you may be wondering why it feels so unlike him? And I, unlike some people out there, don’t say that as a bad thing.  This is a very mature and poignant film. Is it as much fun as his other films? Not in terms of cartoony violence and over-the-top drama. But it is funny.

Thanks to the buddy movie central storyline. Leonardo DiCaprio plays Rick Dalton, a washed-up Western actor with a drinking problem. Brad Pitt plays his stuntman turned driver, Cliff Booth. The pair are trying to find their place in a Hollywood that increasingly has no room for them. Dalton is taking any job he is offered to keep himself in the public eye whilst Booth is left running his errands. Both actors are on great form here and effortlessly make the pair engaging. Underneath all of the other things going on, this film is about male friendship and how they do or don’t evolve. You see these two as they are: men coming to realise that their time is over. OUATIH is Tarantino’s Inside Llewyn Davis. This is a film that is haunted by the fear of growing older and irrelevant. We see Dalton voices his fears about growing more and more useless as he comes face-to-face with the next generation of actor. It’s a key and powerful moment.

Overall, this is a much less pretentious film and it’s incredibly sensitive. There isn’t as much of Tarantino’s show-offiness distracting us from everything. OUATIH is one of his most restrained and compelling films. And that’s something you can see most clearly in Margot Robbie’s portrayal of  Sharon Tate. I know a lot of people have been criticising Tarantino for Robbie’s small part and, I have to admit, she’s not up there with his stand-out female characters. But the pair do a great job of capturing Tate’s spirit and of showing the woman that she was. Robbie is incredibly charming in the role which only heightens the fear for what’s to come. She might not have much to say but the actor brings life to the character in her movements and gestures. And it resonates. For, as Tate breezes through life and sitting barefoot in movie theatres, we know what’s coming. Understanding what life has in store for Tate gives the performance even more meaning. Perhaps, it’s actually a good thing that Robbie didn’t say more. Would it have ruined the mystique? Destroyed the fairy tale?

Because that is what OUATIH really is. It’s a fairy tale look back at Hollywood’s great past. However, thanks to our modern history lessons, we know that the latter years of the 60s were hardly rosey. And a big bad wolf is lurking. We only see Charles Manson on-screen briefly but his presence is felt throughout. Tarantino is adept at creating tension even during the lighter moments. He ensures we are aware there is a real threat and that terrible things are coming. Take the scene in which Pitt’s Booth visits the Manson family ranch which quickly turns into a classic Western stand-off. It’s an incredible scene that is handled perfectly by everyone. I know some people may complain that OUATIH lacks a great and gripping narrative. This is more episodic in feel I guess. Yeah, Tarantino has taken us on better journeys in our time but this film is all about the destination. The journey isn’t unpleasant but all we really care about is where we’re getting off.

And the ending really is incredible. Staying so tame for the rest of the film Tarantino lets rip and is at his bloody best. It’s hard to really talk about the ending of this film but, just like the rest of this film, it feels so familiarly Tarantino and yet so strange and new. It’s clever and horrific. It changes the whole tone of the film and turns your viewing experience on its head. It’s breathtaking in its own gory way. It’s utter madness and it’s amazing. It’s the culmination of a masterpiece of modern filmmaking. Everything is on point. The cinematography, the costume, the sound, and the set design all come together to create this memserising experience. This is a film that made through a love of film and an understanding of Hollywood legend. It’s silly and sentimental and thrilling all at the same time. Sentimental for a bygone era and for the inevitable end of a career full of highlights. If the director really does only have one film left, OUATIH is a perfect part of his legacy.