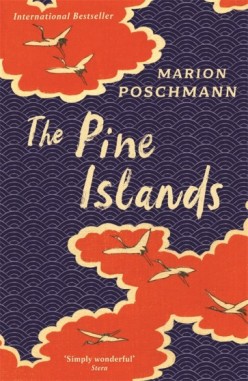 I stumbled across this whilst browsing in a bookshop. I read the back and was instantly hooked. It sounded absolutely perfect and everything I wanted to read. So, I bought a copy. Like any normal human being, right? Apparently not. At least not according to the people on GoodReads. Whilst updating my status with this book the other day I saw something that really irritated me so I’m going to have a quick rant before I get on with my review.

I would never have read this novel if it weren’t for the Booker International longlist – I’d already seen the blurb a few months earlier and decided the book wasn’t for me. After the longlist was announced, I requested and received an ARC of The Pine Islands, direct from a very nice member of staff at the publisher

So, you had already rejected a book because it wasn’t for you but then it nearly won a prize. Then you demanded a copy of it for free, knowing that, in all likelihood, you weren’t going to enjoy it that much. What the hell kind of entitlement is that? This is the kind of shit that gives all bloggers a bad name. Like the people who went into a restaurant and demanded a free meal in exchange for a review. It’s pathetic. The fact that this person also appears to be the kind of person who uses their reviews to let everyone know that they’re more intelligent than you. I mean, it’s GoodReads for fuck’s sake. If the review goes on more than 5 paragraphs it’s too much. Anyway, as you can tell it put me in a huge mood. So, I’d better get on with the reason I’m here.

You know that feeling when a dream feels so real that you have to keep reminding yourself it didn’t happen. It’s normally the most banal and ordinary dreams that feel the most real. For Gilbert Silvester dreaming that his wife was having an affair with a mysterious figure confirmed every suspicion he had about his marriage. So, as soon as he wakes up he leaves. He just packs a bag, collects his passport, and heads to Japan without any warning. Why Japan? He doesn’t know. The man doesn’t even like tea! Once in Tokyo, he encounters a student, Yosa, who is wrestling with the decision to kill himself. The young man is trying, but failing, to find the perfect place to end his life. Gilbert decides to take the boy in hand and the pair set off to follow in the footsteps of Japanese poet, Matsuo Bashō. With such opposing aims, will the pair manage to pay homage to one of Japan’s most famous poets?

The Pine Islands is a strange but fun novel. I think, in order to really appreciate it, you have to fully invest in it. You need to be ready to believe everything and nothing at the same time. And, in terms of story, it’s not really got one. It kind of meanders around Japan where the two main characters try to find what they are looking for. For Gilbert, this is a fresh start and a new creative purpose. For Yosa, it’s deciding whether he has what it takes to commit suicide or not. If you’re here for story and action then you’ll be disappointed. If you enjoy hearing middle-aged German men get all introspective then welcome. This isn’t the kind of tale that you really want to attempt to find too much logic or meaning in. You should just let it wash over you. Let the beauty of the writing wash over you and just accept it. No matter how little it makes sense. No matter how much it frustrates you.

And it will frustrate you. Gilbert is one of those characters that you’ll never be able to love. Although, is just me or is there something kind of loveable about a man so full of himself that he is willing to lecture a suicidal young Japanese man about Japanese beard etiquette without even a shred of humour? Gilbert is an odd character in that, on the one hand, he takes Yosa under his wing to save him but, on the other, is utterly apathetic towards him. Gilbert is inconvenienced by the young man but still goes out of his way to stick together. We’re not supposed to like this man, who so easily ignores the wife he cruelly leaves behind, but I don’t think we’re supposed to hate him either. She remains pretty detached from the whole thing really.

And this detachment really helps the novel as it gets going. As Gilbert and Yosa journey on, the novel quotes the work of Bashō and his mentor, Saigyō. This is when the novel really gets going. Where the idea of story parts and we’re, instead, taken over by a vague sense of insignificance. The vastness of the landscape and the enduring power of poetry showcase the power of nature and the inner battle for transformation. Gilbert hopes this journey will change both him and his new charge. Through Bashō’s words, he sees the potential for change and healing. But which came first, the appreication of nature or the transformation? There is a lightness within the novel that makes it seem all the more impressive.

This novel has a great handle over the different tones of the novel. It is a novel full of dichotomy. There’s the difference between Germany and Japan for a start. Gilbert is very forthright about how he sees Japanese culture and how he would improve it. There’s the difference between Gilbert and Yosa. The one angrily trying to start a new life whilst the other meekly attempt to end his. It is a novel that plays with humour whilst highlighting real emotional struggles. And, most importantly, it plays with the idea of reality and fiction. Did any of this happen? Did only some of it happen? Or did none of it happen? Who knows. But, when the writing is this good, who really cares?

3 thoughts on “Book Review – The Pine Islands by Marion Poschmann”