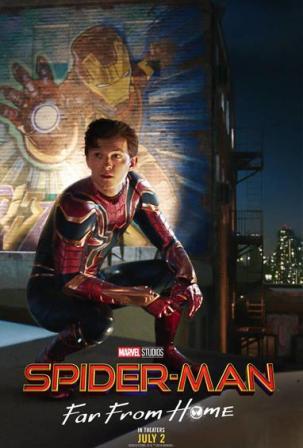 Who knows if there will ever be another film event like Avengers: Endgame. It was a film that had major consequences for fans and for the entire MCU. With half of the people in the universe going MIA for 5 years, we were left with an interesting situation. The people who were left behind had mourned, possibly moved on, and aged since their loved ones disappeared. How were Marvel going to deal with this in their first film after the event? And how exactly has the loss of Iron Man and Captain America had on the world as we knew it? I was excited to find out. Marvel have always dealt with the aftermath pretty well. Iron Man 3 broke the traditional superhero movie mould when it portrayed Tony Stark dealing with PTSD. And then, during the events of Endgame, Tony was coming to terms with seeing Peter Parker get snapped. So, considering how everything went down a few months ago, how is Spider-Man coping after losing his mentor and father figure?

Spider-Man: Far From Home takes place 8 months after the Hulk snapped half of the universe back into existence. Aunt May, who now knows Peter’s secret identity, is running a charity to help those made homeless by the event, now called ‘the Blip’. She is helped in this by the neighbourhood’s own superhero who pops up at money-raising events. But all Peter really wants is some time off. He is about to set off on a European tour with his classmates where he plans to relax, have fun, and tell the girl of his dreams how he feels. Unfortunately, before Peter is able to summon up the courage to tell MJ the truth, he is accosted by Nick Fury and the mysterious Quentin Beck who need his help to protect the Earth from huge monsters. Can Peter manage to save day and get the girl?

For the most part, Spider-Man: Far From Home has all the teen movie fun and games that made Spider-Man: Homecoming feel so fresh. This is another John Hughes meets comic books kind of deal and it’s great. Yet again, we are faced with a superhero film that would be just as much fun without the superheroes. Although, I’m definitely getting too old to watch awkward teenagers both lie to each other about how they feel. I was so close to shouting at the screen as Peter and MJ both skirt around their feelings. But there can be no denying that there is fantastic chemistry between Tom Holland and Zendaya. So much so that you don’t even begrudge how much of the plot revolves around their hormonally-charged love affair. Although, I do have to quibble that the film could do with more of the Peter and Ned relationship that made the first film so perfect. The two rarely share screentime in the sequel and, when they do, the dynamic is different. It’s not as refreshing and funny this time out.

In fact, I will be so bold as to say the second film isn’t quite as successful with the comedy as the first film. There are several recurring jokes that just don’t work and a lot of the humour isn’t given the chance to land properly. Even though the writing is as strong and witty as the first film, there is something less refined about Far From Home. It maybe feels as though it was a bit rushed. Something you can see in the way the film attempts to tie-up loose ends after Endgame. The opening sequence gives us a rundown of life post-the Blip but, if anything it raises more questions than it answers. Life, it seems has mostly gone back to normal, but this seems too easy. I mean, everyone came back to the spot where they disappeared, what about the people who were on a plane? Did they all just plummet to their deaths? Or people in cars? Were they run over? And what of the economy? You can’t tell me that 5 years with a reduced population didn’t have any socio or political consequences? Peter’s school still looks pretty fancy and they can afford to go to Europe. But how many people were paying taxes during after the Snap? Either Marvel doesn’t know or doesn’t care enough to tell us about the world now but it’s so frustrating to just gloss over it so weakly.

But I’m getting off-topic. Yes, there are a few moments where all I could see were plot holes but, thankfully, these were few and far between. This film does everything that we wanted the sequel to. We see Peter being his usual self but also recovering from fighting Thanos. He’s lost so much and just needs a break. This isn’t the Peter we once saw who was keen to jump into the heroic headfirst. He has grown-up in the last 8 months and sees how unprepared he was. Everyone is talking about Spider-Man being the next Iron Man. Tony Stark, it turns out, left Peter a present to help him become the superhero the world needs: access to advanced tech that can also control his hidden World defense system. But Peter isn’t ready to take over. Watching Peter’s character development over the last few films has been great and this film lets Tom Holland really explore the character.

And, most importantly, we see Spidey in all of his web-slinging glory. Even though Far From Home feels like a looser film, I think it does a better job of showing off what our hero can really do. There are some fantastic action sequences when Peter and Quentin are both doing incredibly impressive things and it’s amazing. And this is the first time we see Holland go on a long swing through New York. It’s about bloody time. In terms of the villain, the big twist won’t really come as any surprise to anyone familiar with the comics but it does provide an interesting change of pace. Thanos really changed villains in the MCU so I guess Marvel is trying new things. And I think this is a good thing but, maybe, they tried to up the Spider-Man game a bit too quickly. I could just have easily sat and watched him learn these lessons at home.