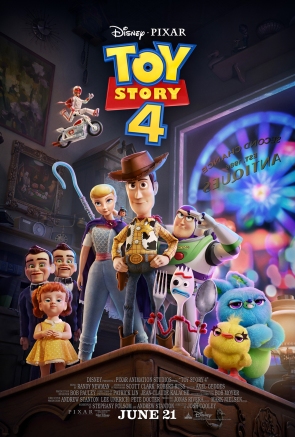 It’s been 24 years since the first Toy Story film hit cinema screens. I’m not sure if we saw it in a cinema but we definitely had a copy of it on VHS. My sisters and I all loved it. We must have seen the second film in the cinema because we didn’t own a copy of that. And Toy Story 3 came out when I was at university. It was a house outing because all of us had fond memories of the series. Fond memories that were completely manipulated by the story of aging and leaving your childhood behind. That’s exactly what a 22-year-old needed. It’s been 9 years since Pixar left us utterly broken at the scene where Andy waves goodbye to his childhood toys and gives them to the next generation. It was the perfect end to the series. Or so we thought. There wasn’t any need for it but, god, we were excited to see the gang again. There’s something about the combination of Tom Hanks’ voice and Pixar’s unbeatable animation that just makes you feel at home.

The thing that made the first Toy Story film work so well was the central concept. The idea that toys come to life as soon as their owner leaves the room was utterly charming and original. Well, not original I guess. Who didn’t have the idea that their childhood toys had a life of their own? But it tapped into that familiar idea and brought it to life in such a heart-warming way. And it certainly made an impression on audiences. All the films in the franchise have an almost perfect score on Rotten Tomatoes so it was possibly a bit risky making a new one. Risky or absolute bloody genius. I mean, as if this wasn’t going to make a shit load of money regardless of how good it was. But that doesn’t mean it isn’t important. So, is it any good?

Toy Story 4 picks up not long after the end of the fourth film. Bonnie is still the happy owner of Andy’s old toys but, after all this time, Woody is having to deal with the fact that he’s no longer the favourite toy. Although that doesn’t stop him from worrying about her. Which is how he ends up sneaking into her backpack for her first day of kindergarten. He sneakily helps Bonnie during a class project which leads to the creation of Forky. Forky, made from an old spork and some craft supplies, is Bonnie’s new favourite toy, which is enough to bring him to life. Unfortunately, Forky still thinks he’s trash and is constantly trying to throw himself away. On a family road trip, Forky throws himself out of the RV and Woody is forced to leave the gang to find him. Can the cowboy get Forky back to Bonnie before she misses him?

There is a lot of familiarity with Toy Story 4. Once again, the film is based around the conceit of reuniting a lost toy with their child. It’s a theme we’ve seen throughout the whole franchise but this time it’s a little different. This film raises the question of existence and identity. Bonnie’s imagination brings Forky to life and cements his position as a toy. In a world full of commercialism, it is refreshing to have film focusing on the power of make-believe. Children don’t need all the newest gadgets to have fun. It’s a nice message. Or it would be if shops weren’t currently full of toy versions of Pixar’s latest creation. But that’s Disney for you.

Still, this film, more than the others, feels as though it’s about the toys. I know what you’re thinking, “Laura, all of them have been about the toys”. Yes, but in the context of their child. This film is about what it is to be alive, especially when you no longer have a purpose. With the return of a familiar face, Woody comes face-to-face with the idea that there is more to life than belonging to someone. Bo Peep, as we find out early on, was given away years ago. Now, she spends her days wandering from playground to playground so random children can play with her and instantly discard her. She is a strong, independent shepherdess who has flourished on her own. Woody finds himself pulled between clinging to the past and a possible new future.

Once again, Toy Story 4 offers a very adult and emotional message. These last two films have been so bloody sad and I both love and hate it. Hate it because a woman in her 30s shouldn#t be ugly crying at an animated film. Love it because it’s such good storytelling. There has always been heart within these films but the third and the fourth have more than we were ready for. But that’s not to say they aren’t also stuffed with humour. The new cast of characters is as fabulous as we’ve come to expect with a standout performance from Keanu Reeves as Duke Caboom, a Canadian stuntman who struggles with his stunts. And Key and Peele are equally great as Ducky and Bunny. It’s a strong line-up.

However, despite all of the loveliness, it is hard to ignore certain truths. This film is, essentially, Woody’s story, which means the rest of the gang gets kind of a short shrift. Buzz has his own story but it feels like a desperate attempt to get Tim Allen more screen-time. It’s not very well-developed or exciting and the major joke runs flat. It just feels a bit tacked on. But he fairs better than the rest of the gang. I know we’re dealing with a lot of characters now but, if this really is the last time, it would have been nice to see more of everyone. Instead, we get a few cutbacks to them waiting for news. This film has such a strong central narrative in Woody’s journey that it feels as though the rest was added to the script without much thought.

Toy Story 4 may not quite live up to its predecessors but, to be fair, it had a lot to live up to. And let’s be honest, for the fourth film in an almost faultless trilogy, it’s much better than it should have been. If this is really where we say goodbye, then I pleased with it. You just might not be able to tell because of all the tears.

One of the books on my December TBR. I can't wait to read this one.
BOOK REVIEW: A Boy Called Christmas by Matt Haig
Let's talk about the Waterstones Book of the Year...
The Penguin Book of Christmas Stories
It's Christmas, so I'll definitely be trying to get in a festive Christie or 2.
It looks as though another Winter will pass me by when I don't get around to reading Winter by Ali Smith. It feels like ages ago that I read Autumn and then immediately bought this one
QUESTION: What is your first festive read going to be?
READING WRAP-UP: How did your reading go this month?
QUESTION: Have you read this one?