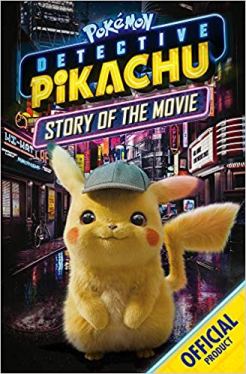 The first time that I saw the trailer for Detective Pikachu I thought it was a joke. I mean Ryan Reynolds voicing a Pikachu wearing a deerstalker? It was the stuff you normally find on that weird part of the internet. But it was real. And despite being utterly convinced that it would suck, I was kind of excited to see it. When I did, I wasn’t sure what to think. I reviewed it here but couldn’t quite get my point across. I liked it but I knew it wasn’t good. But it wasn’t even bad in a funny way. It was kind of confusing. So, when I found this novelisation, I wanted to find out if the added benefit of detail and description would add something to the story. I was hoping it would help us get closer to the characters and maybe make things a little clearer. Of course, I was also aware that this was a book recommended for children so I wasn’t expecting much.

I’m not really sure what I expected when I started reading Detective Pikachu. I guess I wanted to see if it had added anything to the plot of the film. That was a weird film. The narrative didn’t quite know where it was going and had to rely on massive amounts of exposition to help move it along. Tim, a young man who works in insurance, is called to the big city after the death of his father, Harry. Harry was a detective and Tim manages to get caught up in his father’s last investigation. But, thankfully, he has help from his father’s partner. A Pikachu who, for some unknown reason, is able to speak to Tim and only Tim. Pikachu believes that Harry is alive and the pair set off to find out the truth. Along the way, the uncover many mysteries that lead them to someone they never suspected.

What can I say about this novel? This has the feel of someone providing film commentary for a blind viewer. It literally describes the action on screen in the most basic terms. It’s the most basic and simple language you can think of. At times it felt a bit awkward and stilted. And I know it’s for younger readers but there’s no flourish here. No melody to the language. The novelisation is just full of short sentences and dialogue. It’s all “he said” and “she said” and not much else. Really, this book makes the film look like a bloody masterpiece.

Maybe it would help if you hadn’t seen the film? There’s something about reading lines that you’ve already heard Ryan Reynolds speak that makes it all very disappointing. But more than that, this is a very visual story. It’s not the same reading it on the page. Especially when the description is so sparse. Or maybe I’m just too old for this novel? I guess it would be a decent read for a younger reader. There’s excitement and danger a plenty but there is also heart. The story isn’t great but it’s based on a pretty rubbish film script. In the hands of the right reader this would be a perfectly enjoyable book. For a 30-something woman? I probably should have expected this.

Are there any popular book series that you've never read?
A Sunday night stencilled edges appreciation post. Just look at these absolute beauties. I know that I'm falling for an obvious marketing ploy but you can't deny how wonderful these editions are.
This cover is absolutely beautiful. The colour combination is just incredible and the artwork is so cool. Then there's the LGBTQ+ story set in the 20s and 30s. How could I not pick it up?
Was I drawn to this book because of the cover? Yes, but look at it. It's beautiful.
What's your favourite trilogy?
I think I'm going to tackle this one next. It sounds really interesting and definitely relevant. Vaccines are a hot topic right now and I'm hoping this will be as good as it sounds.
BOOK REVIEW: French Braid by Anne Tyler
Earlier this week @elliewithbooks tagged me to spell my name in books. Thankfully I don't have an overly complicated name. The U is slightly annoying but I have one book I can always rely on.
BOOK REVIEW: Hourglass by Keiran Goddard