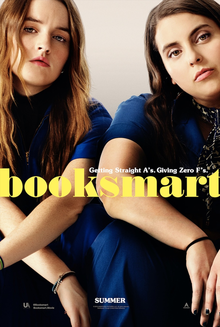 Let’s pretend it’s Tuesday 18th June and not Monday 24th. This is the film that I had intended to review last week but, at the time, I was probably holding my one-day-old niece for the first time. And, as I gave up all ideas of achieving anything last week, I didn’t even think about taking part in the Creatively Squared hashtag challenge. So, to get myself back on schedule, I decided I would post two movie reviews this week. Starting with a film that has followed me around social media since it was released. I was skeptical about Booksmart in the same way that I am about any film being given almost universal praise. It always seems too good to be true. And as much as I like Olivia Wilde, this was her directorial debut. Could it really be as good as everyone claims? I mean I’ve seen people already describing it as their favourite film. I never trust people who do that. Anyone who says the last film they saw is their favourite is either an idiot, a liar, or someone who has only ever seen one movie in their life.

I like to think of myself as something of a badass but, really, I know what I am. A shy, introverted bookish girl who prefers to spend her time alone. I’m not a “slave to the sesh”. More of a patriot of the page. My teenage years included the same amount of underage drinking, smoking, stupidity, and slacking off as most people but I was hardly a great rebel. So, I’ve never sat down and watched a film or television show that really speaks to who I was back then. For all intents and purposes, I was a good girl. Admittedly, one who was more than happy to bend her morals when it came to obtaining alcohol and weed but a good girl none the less. Everything was kept within moderation. I was never the highest of achievers at school but I always put the work in. Except when it came to physical education, obviously. Cause who needs that in their life?

So, supposedly, Booksmart was meant to speak to people like me. Focusing on two geeky outsiders on the eve of their graduation. Molly and Amy (Beanie Feldstein and Kaitlyn Dever) have dedicated their teenage years to studying so they could get into Ivy League Universities. Something they aren’t too worried about until Molly comes to a startling realisation. The moment when Molly confronts her High School bullies and tells them they won’t amount to anything would be a game-changing moment in any other teen comedy. Not in Booksmart. Instead, it turns out those popular kids have post-graduation plans just as impressive as hers. Whether they’re heading to Ivy League colleges or accepting jobs at Google, it turns out you can amount to something whilst also having a good time.

So, with one night left, Molly decides she and Amy have to prove how fun they are. Lying to their parents, the girls head out to crash the big party at Nick, the popular jock’s, house. Unfortunately, neither know where the party is being held. It doesn’t out them off, thankfully, and the pair set off on an unforgettable life where they encounter their fellow students and get themselves into all sorts of scrapes. Just think Superbad but with more girls and more intelligent jokes. Booksmart focuses on two teenage girls and their friendship rather than a desperate pursuit of sex. Not that it doesn’t come up, of course, but it refuses to become the main aim. Instead, we enjoy the co-dependent relationship between the two girls and the chemistry between actors Feldstein and Dever.

The script is shrewd, funny, and realistic. Yes, the scenarios are over-the-top because it’s a film but there are exchanges between the pair that feel like two normal teenage girls. The way they awkwardly talk about sex, in particular, is a refreshing change to the norm. It’s such a lovely thing that shouldn’t be as revolutionary as it actually is. This is what has made Booksmart so appealing. The way that it approaches these topics without any bother. And the way it deals with Amy’s homosexuality without bringing attention to it. She fumbles her way through her sexual awakening in exactly the same way that we’ve seen straight characters before. Exactly as it should be.

Olivia Wilde has done a remarkable job on her directorial debut. Yes, there are moments when she tries to get a bit fancy and it doesn’t quite fit. But which first-time director hasn’t been guilty of that? And, for the most part, Wilde brings a refreshing new perspective to all sorts of familiar scenarios. Even though the comparisons with Superbad are inevitable, Wilde elevates her film thanks to her careful handling. There is a certain finesse and charm to this film and it radiates through the story. It helps bring the script to life and allows the characters to flourish. She really does capture the drama, heartbreak, and hilarity that floods through everyone’s youth. It’s a time that is rife for comedy even if you can’t see it at the time.

So, yeah, Booksmart is as great as people are saying. It is inclusive and feels very representative of the current time. But that doesn’t mean I approve of people putting it in their top 5 films. Because it isn’t perfect. The script is funny but it’s very familiar. We know where this is going and the stops along the way aren’t that original. There are also plenty of self-indulgent jokes that never quite work and are dragged on much longer than they should be. There are down points but, thankfully, there is so much else going on that it doesn’t matter. This is a funny, clever, and charming film. It’s impossible not to come away from it feeling better about the world. If teenagers anything like this are the future of humanity then we might just be okay.