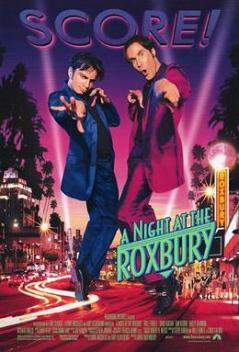 So, you may have noticed that this week’s Throwback Thursday post is actually a day late. And, if I’m honest, I nearly didn’t write it at all. I ended up meeting a friend yesterday so couldn’t get time to post. And today? Well, I just couldn’t be bothered. I watched the film earlier in the week and it left me totally uninspired. But I’m here. Trying to stick to my schedule. If I start letting myself believe that I don’t have to do things then I won’t do them. It’s like Instagram. I’m having a massive Instagram crisis and I keep telling myself it doesn’t matter. Which, to be fair is true but that’s not the point. The whole reason for keeping this blog up and doing my Instagram stuff is to help in my career. Now, I’m not being delusional. I know that this isn’t going to get me anywhere but it means I can try things that might help at work. So, yeah, what I’m saying is you’re my test subjects. Don’t you feel special? At least I kind of know what I’m talking about with you guys. I work for a company that sells football kits so, now I’m in charge of their blog, I have to write a football related post every week. I know nothing about football. I don’t even know the vocabulary. In the last week, I’ve used the word “cross” in a football-related context countless times never knowing if I was using it correctly! Best not to dwell.

This week’s main review showcased the work of loads of ex-SNL castmembers. So, to fit in with that, I decided it would be a good idea to watch another SNL related film. There are plenty out there to choose from. And plenty of good ones. I mean Bridesmaids is always worth a watch. Blues Brothers and Wayne’s World were two great films to come out of simple sketches. There has been so much SNL talent over the years that the opportunities were endless. What did I end up watching? One of the worst possible options. At least it was short, I guess.

A Night at the Roxbury was based on a long-running sketch in which Will Ferrell and Chris Kattan were joined by the host to play three pathetic guys on a night out. Their signature move was bobbing their head to the song “What Is Love” by Haddaway and being rejected by women. The Roxbury Guys sketches clearly proved to be enough of a hit to give the pair their own film. The film barely expands on the original premise. Sick of being denied entrance to all the best club’s, the two brothers have a dream to open their own venue. But their father, in the fake flower business, would prefer his sons settle down and help run his business. He’d also quite like Steve (Ferrell) to marry Emily (Molly Shannon), daughter of the owner of next door’s light shop. Then, the couple could merge the two businesses and create a great empire. Unfortunately, Doug (Chris Kattan) isn’t keen on seeing his brother go down this road. Leading to the two brothers to fall out in dramatic fashion.

And that’s kind of it. I mean, officially, there are other things going on in this film but it’s all so insignificant. The only thing this film really gives a shit about is seeing the two actors bobbing their heads. So, anything beyond that is just thinly written and not very funny. Watching this film makes me feel better about Wine Country because this is genuinely dire. I was so bored. Will Ferrell is the kind of guy who would normally make me laugh without even trying but this was painful to watch. I described Wine Country as being one-note. That note was a pleasant one. The one-note being played here was definitely out of tune. This film just goes to show that making a feature-length film out of a sketch that runs at a few minutes is a bad idea. To say this is stretched is an understatement. If this film were an elastic band it would be at breaking point. And I certainly don’t want it flicking me in the eye.

And do you know what’s worse? The lack of chemistry between Ferrell and Kattan actually made me think better of Holmes and Watson. Holmes and Watson! I can’t. But as dismal as that film is, at least Ferrell has a bit of a spark with John C Reilly. There’s nothing here. It’s like everyone knows they’re in something shit and are just there because they have to be. You feel sorry for everyone involved… but not as sorry as you feel for yourself having to watch it.

BOOK REVIEW: Towards Zero by Agatha Christie
This wasn't a good day to take photos which is why they all look a bit murky and awful. It's a shame because this book look so spectacular in real life. The green is really vivid and the red details really pop.
QUESTION: Do you decide on your next read before you've finished your current one?
It's no secret that I've been super excited about this one but I just reckon it will be utterly delightful. Not only does Stanley Tucci just seem like a nice guy but he knows his stuff. This should be a fascinating read.
BOOK REVIEW: The Case of the Missing Marquess by Nancy Springer
One of my recent acquisitions is this beauty. Burntcoat by Sarah Hall was one of my October pre-orders and I'm looking forward to reading it.
Have I done enough reading this week?
I was meant to be posting my review of this book today but I couldn't be bothered. Instead, today's blog post is a round up of my October pre-orders.
QUESTION: What was the last book you added to your TBR?