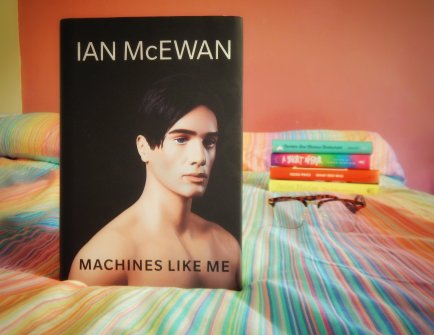 One of my best friends works for Vintage books so she is constantly offering to pick up cheap books for me. I know I know. I’m making it sound like a bad thing when it’s not. The only problem is that I never remember to ask her. I buy the book myself and then have to put up her with telling me she could have got it for me. So, when I heard about Ian McEwan’s latest book dealing with AI, I knew this was one of the times I should take her up on it. I was a massive fan of Ian McEwan as a teenager but I’ve lost my way over the last few years. Basically, everything after On Chesil Beach has remained unread on my shelf. And I’ve been okay with that. Sweet Tooth and Solar I wasn’t that interested in but I did really want to read The Children Act and Nutshell. Honestly, I did. I just never got round to it. But this one sounded interesting. An alternate reality 1980s where AI technology exists. Part of me was worried, though. AI has become a bit of a thing in literature recently and I wasn’t sure that McEwan was the best to add to the conversation. But, I couldn’t let my friend down again.

Machines Like Me opens in 1982 but this time, instead of victory, British forces are left devastated from the Falklands War. The Argentinians were able to get their hands on some advanced technology, which caused British fleets were almost wiped out. The defeat starts a chain reaction that leads to Thatcher being removed from Downing Street. Suffering from party unrest, challenges for power, and one of the worst election defeats for years, Tony Benn comes to power after being hailed the people’s champion before ultimately removing the UK from Europe. Doesn’t that all sound a bit familiar. Yep, Ian McEwan’s version of the 1980s is highly reminiscent of our current political and social circumstances. The technology may be a little further along but this novel aims to deconstruct our society in a removed manner.

It is a novel that cautions against advancement. In this reality, Alan Turing didn’t die after accepting “the cure” for homosexuality. Instead, he chose prison and, after his release, starting flourishing in the realms of technology. His work eventually caused the breakthrough that made AI possible. The initial run of realistic looking and intelligent Artificial Intelligence consists of 13 Adams and 12 Eves. They are expensive but Charlie Friend, the narrator of the novel, has a lump sum after the sale of his mother’s house. He invests in the technology because he’s curious. Charlie is in his 30s and lives alone in a one-bedroom flat. He is in love with his upstairs neighbour, Miranda, 10 years his junior, and makes just enough money to live by playing the stock markets. Adam’s arrival causes a great deal of disruption in his life and brings him into an awkward love triangle. And Charlie ends up both regretting and celebrating his decision to purchase Adam.

Ian McEwan has always been a writer driven by character and in Machines Like Me he explores the ambiguity of humanity. All of the characters are dubious individuals who may or may not be morally good. Good people get punished for trying to do the right thing whilst bad people get away with their crimes. It’s a novel that shows just how grey humanity it. Naturally, readers are able to see the justification in questionable actions but Adam, the AI at the centre of the novel, is less open-minded. This is just one of the many reasons that technology will never match humanity. There is an understanding and an ability to see beyond the surface of something. Adam cannot see that. Despite his ability to learn and develop, he will always see the world as it is. The reason that his poetry is so questionable and he is unable to connect with novels.

Adam is the most interesting character in the novel but he becomes lost in a lot of unnecessary story-telling. It feels as thought McEwan was trying to do too many things here. We have the painfully obvious allusions to Theresa May and Jeremy Corbyn, Brexit, and the state of society all played out on this historical stage. It’s an interesting way to approach a novel about social commentary but it feels a bit heavy-handed. Removing the analysis from modern-day potentially allows the reader to step back and see the familiar in a new way. However, in Machines Like Me the conceit feels a bit like a rubbish SNL sketch.

On top of all this, there are the extra storylines dragging the novel down. We learn about Miranda’s secret past, get introduced to an at-risk child called Mark, and learn a lot about Alan Turing. I think this would have been a more successful novel had McEwan simply tightened his focus and just dealt with Adam’s introduction into Miranda and Charlie’s lives. If he’s continued to look deeper into the idea of what makes us human and why our humanity inevitably leaves us wanting to create better versions of ourselves. It didn’t bode well that my favourite quote was on the first page of the book.

In the Autumn of the twentieth century, it came about at last, the first step towards the fulfilment of an ancient dream, the beginning of the long lesson we would teach ourselves that however complicated we were, however faulty and difficult to describe in even our simplest actions and mode of being, we could be imitated and bettered.

And just like the humans of his own story, McEwan takes a slightly flawed narrative and tries to better it. Unfortunately, it doesn’t work out too well. This feels like a book that is trying and not quite managing to do it all.

It took me a long time to finish this book and it was simply because it felt like it was neverending. It’s a book that refuses to be pigeon-holed, which is fine, but that refusal has caused it to lose its identity altogether. It’s part history book, part science-fiction, part character study, part social commentary, and part Alan Turing biography. You can’t say this book isn’t high concept. It’s just that, in terms of entertainment value, it’s definitely stuck in the lower regions.

5 thoughts on “Book Review – Machines Like Me by Ian McEwan”