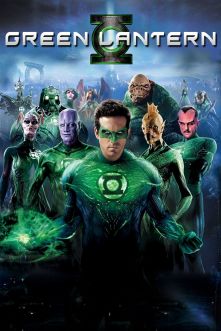 On Tuesday I reviewed Shazam! a DC film starring Mark Strong. So, what film could I possibly watch for this Throwback Thursday post? How about a DC film starring Mark Strong? Especially as it’s considered to be one of the worst superhero movies of all time. It even has a lower rating than X-Men Origins. Of course, they both star Ryan Reynolds. Until Deadpool was finally released, it seemed as though that guy just wasn’t going to make the superhero thing work. On the plus side, it isn’t the worst the film in DC history. Catwoman and Jonah Hex will forever beat anything and then there’s Joel Schumacher’s reign of terror. But, certainly, Green Lantern has to be one of the biggest missteps in comic book movie history. It’s just become an easy joke. Something that Ryan Reynolds is more than happy to join in with as evidenced by that line in Deadpool.  I guess something good finally did come out of this film.

Ryan Reynolds plays Hal Jordan, a test pilot whose father died during a test flight gone wrong. When a dying alien lands on Earth, his magic ring chooses Hal as the next member of the Green Lantern Corp. He becomes the first human being to become one of the thousands of guardians protecting the different sections of the universe. Once Hal puts on the ring, he gains a green suit and the ability to conjure whatever he can imagine. The ring uses the power of will and its only limitations are Hal’s imagination. When Parallax, an old enemy of the Corps, escapes and vows revenge, Hal gets caught in the middle. Hal must overcome his own fear and the doubts of his fellow Lanterns to save Earth and protect his childhood friend Carol (Blake Lively).

Do we even need to do this? Green Lantern is a fucking mess. The opening monologue is just dreadful. The first line spoken by an on-screen character is delivered really badly. The CGI is laughably bad. The story is a mess and the script is the definition of cringe. The editing doesn’t make sense. In fact, one of the only positives I can come up with for this film is that is introduced Ryan Reynolds to Blake Lively leading to one of the cutest marriages in the history of cute marriages. The film was supposed to be the first in a line of features to compete with the burgeoning Marvel Cinematic Universe. What it ended up being was one of the most embarrassing superhero movies in the history of cinema.

The opening monologue suggests that this film is going to suffer from too much exposition but, very quickly, we discover that isn’t a problem. In fact, we don’t really know anything much. We’re finding out details that become important to the plot only as they are becoming important to the plot. We are introduced to a bunch of characters whose fates become intrinsically linked but it takes a good chunk of the film to find out they already know each other. We’re supposed to believe that Hal is affected by his father’s death but we only find out about this in a clumsy sequence where Hal has a panic attack. That’s it. The defining moment of Hal’s life is dealt with in that way.

This is a film that suffered from too much studio interference. Marvel has done so well at the cinema partly because Disney has let them do what they want. They are in control of their films and who they hire. Warner Bros had too much say in the making of Green Lantern and it fucked everything up. Executives who thought it was simple to crack the comic book code. Instead, the film just tears apart the deep mythology of the comic books. It makes a joke out of something that could have been amazing. It wastes the potential of its cast (Mark Strong and Peter Sarsgaard are two of the only standouts here).