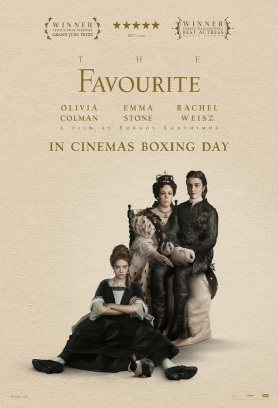 Another week and another potential Oscar nominee. This is another that I was really desperate to watch and its mainly because of Olivia Colman. I adore her and it definitely has something to do with Peep Show. Anyone who was a fan of that show and doesn’t still have a massive soft spot for Sophie is insane. Obviously, she has proved time and time again that she is a fantastic actor in any situation but she is such a fantastically funny woman that she deserved a great role like this. The trailer more than hinted that this was going to be a comic creation like we’ve not seen before and I was all for it. The Lobster is the only other film I’ve seen by Yorgos Lanthimos but I loved it. So was excited to see what he did with this story. Everything I’d seen or heard about it was weird. Everything seemed to have been planned, right down to the justification of the credits, to make The Favourite as disconcerting as possible. And I was ready. But before we get into this, one more word about the credits. I’ve heard and seen a lot of people complain about how the words are set out on-screen but I don’t see the problem. Everything is perfectly readable and, maybe its just me, but they sort of end up having the effect of a tapestry. Plus, it’s a historical thing. It fits and, frankly, I think it worked brilliantly. But I’m getting off topic.

When is a period drama not a period drama? When it’s a Yorgos Lanthimos period drama obviously. Despite being set in 18th century England, The Favourite has an inescapable contemporary feel to it. There’s the outstanding ballroom scene featuring dance moves that belong on Strictly Come Dancing rather than in the court of Queen Anne. And the same absurdist approach that Lanthimos has become so known for. The overall feel of the film seems, at first, to jar with the script but, as time goes on, it is clear that Lanthimos’ unusual treatment of the period drama gives it life. This is not all simpering petticoats and outrageous wigs. This is a soap opera in a historical setting. Far from being flat and academic, The Favourite is full of energy, funny and raucous. It isn’t the portrayal of the British Royal Family that we’ve become used to seeing.

And it’s all the more confusing considering its star, Olivia Colman, is moving from playing the outrageous Queen Anne to the reserved Elizabeth II in The Crown. I’ve been a fan of Colman’s for years now and its fantastic to see her getting a role like this. Anne is fantastically funny but emotionally damaged. The childish tantrums and crazy past times (anyone else for a spot of lobster racing?) are a tad reminiscent of Miranda Richardson’s portrayal of Queen Elizabeth I in Blackadder but on a much more absurd scale. And then there’s the fact that in between the pouting, moaning, and shouting at page boys, Anne is dealing with a great deal of emotional baggage. Her whole life has been tainted with loss. Something that Lanthimos has personified with the use of 17 rabbits that make their presence felt throughout the film. No matter how abhorrent her behaviour and attitude may appear, Colman always makes sure that you always have sympathy for Anne. You always see her human and vulnerable side. You understand why she acts the way she does and, in the end, you can’t completely dislike her.

Of course, it helps that we are made abundantly aware of how lonely her life is thanks the camera work. The film was shot using a wide-angle lens so the frame becomes distorted. It gives the work a sort of dreamlike feel and only highlights how huge the house is. A simple walk down a corridor suddenly feels like the most remote place in the universe and, in keeping with the theme, everything is rather dank and dark to boot. Robbie Ryan’s cinematography has the added benefit of making everything feel very enclosed. You become just as penned in and disoriented as the Queen herself. It’s almost as if there is nothing beyond the walls in which we are standing. All that matters is this woman and the relationships she’s forged for herself.

After all, despite Colman’s memorable performance, the story at the heart of this film is the conflict between the Queen’s trusted confidante, Sarah Churchill (Rachel Weisz) and her cousin, Abigail (Emma Stone), who has fallen from grace and working as a maid. Sarah has been a close friend of the Queen’s since they were children and finds herself in a position of power. She is able, through emotional and sexual manipulation, to bring about political changes that aid herself and her husband (Mark Gatiss), who is currently heading up the army in France. Abigail quickly sees the power that Sarah holds and begins to ingratiate herself with Anne in Sarah’s place. Using every trick she can to depose her cousin and fight her way back to the top.

Though they are, unfortunately, constantly overshadowed by Colman, both Weisz and Stone are impressive in their respective roles. Weisz’s Sarah is controlled, measured, and ruthless. Not being shy in letting people know she will stop at nothing to get what she wants, Weisz is a powerful and dangerous presence on-screen but still hints at a touch of emotion concerning her relationship with Anne. Alongside her, Stone revels as Abigail and manages to flit brilliantly between feigned innocence and charm to ruthless determination. She is some parts Lady Macbeth, some parts soap opera femme fatale, and all parts bloody brilliant.

I had hugely high hopes going in to The Favourite and I’m happy to say it was everything I wanted it to be. After watching The Lobster, I couldn’t help but feel it was a little self-indulgent and there were moments here that  suggest that too. But none of that mattered. It’s a weird and unusual film given it’s period setting and historical narrative. But everything works incredibly well. It feels at all times both real and unreal. Like fantasy and reality all mixed together. You go from being thoroughly entertained to immediately shocked. One minute surrounded by funny joviality and the next facing horribly violent images or emotionally raw confessions. And everything is so wonderfully balanced on the shoulders of three fabulous women and their magnificent performances. In the hands of different actors these roles would not have worked. With other people at the helm this film would have crumbled. Thankfully, it is something wonderful. And it deserves all of the recognition it’s getting.