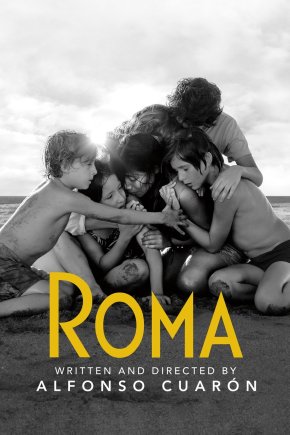 It’s getting near to that time of the year when I madly try to watch all of the films nominated for a Best Picture Oscar. As I only just managed it last year, I’m trying to get ahead of the curve and watch the most likely candidates before the nominations are even out. Luckily, they’re all films that I want to watch anyway so, even if none of them end up with a nomination to their name, I won’t have watched them for nothing. First film on the agenda is one of the most talked about film of the end of 2018. I was too busy watching shitty Christmas films to watch Roma when it was first released on Netflix. So, I made it my mission to watch it at the beginning of January. I’d only ever read absolutely positive things about it so, it’s fair to say, my expectations were pretty damn high. But could it really be as magnificent as we’ve been allowed to believe? We know what Netflix films can be like after all? Obviously, as you’ve already seen my star rating, you’ll know that it did live up to its reputation but, let’s be honest, there wasn’t any real doubt was there?

Written by director Alfonso Cuarón, Roma is a semi-autobiographical take on his childhood, which means it is an intensely personal story. And clearly Cuarón is utterly invested in making sure the project is perfect as he took on the role of cinematographer and co-editor as well. The film is a fascinating watch because of the way it mixes the personal with the wider world. He expertly combines close-ups with wider shots to switch between highly detailed observations and the bigger picture. It has the effect of making Roma feel like a very narrow character study mixed with an epic tale of the 1970s. It manages to feel like an incredibly intimate portrayal of family life and a detathed documentary at the same time. Yet being completely engrossing and beautiful.

Roma is set in the Colonia Roma district of Mexico City where he grew up. It follows the life of a middle-class family and their two maids. As domestic problems change the structure of the household, the story centres on one of the maids Cleo. Cleo is a much-loved member of the family but, ultimately, she knows her place. She spends her days carrying out seemingly endless household tasks but is seen to settle down with the family to watch television. She is at the centre of the children’s lives but, when her employers marriage starts to crumble, she knows when to step back. Although her employer, Sofia, never lets Cleo forget her place, when the maid’s own world starts to unravel she has the full support of the entire family.

Cleo is close friends with her fellow maid, Adela, who introduces her to a new potential romance. Fermín is a handsome young man with a passion for martial arts. After one of the dates, he treats her to a display of naked martial arts as she watches from his bed. He’s a strange man who, unsurprisingly, abandons Cleo when things suddenly start getting serious. After discovering that she’s pregnant, Fermín dashes off into the sunset leaving Cleo to face her future as a single mother.

This is a story that manages to invoke the historical events of Mexico City in the 1970s whilst also highlighting the highs and lows of family life. The way he uses Cleo’s work to show the hardships that are befalling everyone in the household is brilliant. Take the recurrent theme of seeing Cleo trying to wash away the dog shit that keeps building up on the driveway. A wonderful metaphor for the way in which the characters keep glossing over their problems rather than deal with the cause. Sofia refuses to believe her marriage is falling apart and uses her children to attempt to make her husband stay. Cleo falls into her pregnancy as she is expected to but never really faces up to the reality of her situation. The two women are constantly washing away the shit that builds up in their lives rather cutting out the negative parts.

It is proving almost impossible for me to do Roma justice in writing this review. It is a fantastic tale that is full of heart, passion, charm, anger, and sadness. It is a truly human tale that plays out in front of a tense political background. The main narrative is punctuated with little hints of the mounting tension taking place around the family home. After Sofia desperately says goodbye to her husband, a group of soldiers march past their house. A trip to buy a cot is interrupted by a group of militia violently breaking up a student protest. The are grand moments when the camera sweeps through the crowd to give the audience a glimpse of the bigger picture but it always comes back to the intimate central narrative. It will always come back to focus on Cleo. Even this more epic moments have a sort of serenity to them because Roma isn’t a film that is really interested in anything other than the women at its centre. Anything else happening at the time is just consequential. It feels as though the camera has just happened upon it as it follows Cleo in her daily life.

It’s safe to say that it is a visual stunning film and there are several fairly absurd moments. The screen is full of strange but brilliant little moments. Like a man being shot out of a canon or the grand martial arts meeting when a guru impresses the men in front of him by standing on one leg wearing a blindfold. These moments, added to the way the camera moves and the fact that it’s shot in black and white, manage to give Roma something of a dreamlike quality. Yet there is something so familiar and human here. It captures everything of real-life with its mix of tragedy and comedy. And it is all beautifully held together by a memerising performance from newcomer and non-actor Yalitza Aparicio. Her stoic and delicate performance as Cleo is perfect for capturing who she is and she’s perfect. I wish I was a good enough writer to really capture the brilliance of Alfonso Cuarón’s masterpiece. It’s so detailed yet simple. Utterly captivating and heartbreaking. It’s one of those you just need to see. And then see it again. And again. And again.