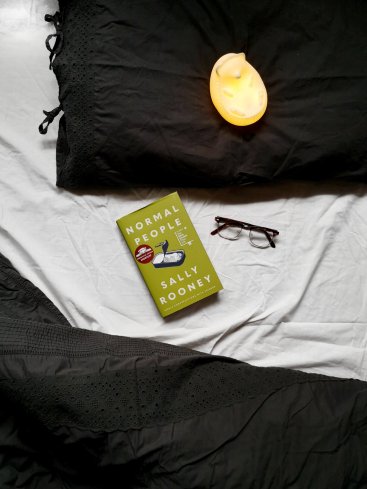 Do you have any reading resolutions for the year? I know a lot of people like to challenge themselves by setting a reading target for the year. This isn’t something that I tend to do because I don’t want to go down the road of seeing reading as being competitive. If that were to happen, I worry my life would become less about the book and more about the numbers. I want to be able to read at my own speed and not feel guilty. However, as I’m trying to be an active Goodreads member this year as well, I have set myself the modest target of reading 30 books this year. Last year I read 34, which is including a massive slump towards the middle of the year and a fairly shitty December. So, hopefully, I’ll make my target. At the very least I’m off to a good start as I finished my first read of the year yesterday. I may have started it in December but it counts to this year. Thank you very much Goodreads.

Normal People by Sally Rooney has been the novel of the 2018. It may not actually have won the Man Booker Prize but it is the book that most resonated with people from the shortlist. I haven’t read Sally Rooney’s debut novel Conversations with Friends but I still wanted to see what all the fuss was about. I wasn’t entirely sure what to expect but it sounded fun enough. Kind of like One Day but more Irish and mopey. So, for someone as cynical about romance novels as I am, it sounded perfect! At its heart, Normal People is a love story. It shines the spotlight on Connell and Marianne, two teenagers who grew up together in Sligo. Although, that is pretty much where the similarities end between them. Marianne is from the big mansion out-of-town and Connell’s mum is her cleaner.

Although the pair can’t help but notice a connection between the two of them. Connell feels both on edge but comfortable in her company. He is embarrassed in case anyone finds out but he wants to impress her. He want to be around her. The pair enter into an immensely awkward and secret sexual relationship and it becomes quite clear that Connell holds all the cards. Marianne can’t help but submit to his: something Connell can’t help but feel uncomfortable about. The affair ends thanks to teenage social politics but picks up again when the pair both move to university in Dublin. Over the coming years, we follow their on-again, off-again romance as the pair try to figure out who they are and what they really mean to each other.

If you take away the complexities of Rooney’s novel, this is the story of two young people coming to terms with their own gendered and sexual identities and where their feelings for the other fit in. Marianne finds herself under Connell’s spell from the start of their complicated affair which leads her down a submissive road and into the arms of men she doesn’t care for but who are willing to hurt her in the ways she thinks she both deserves and needs. On the other side, Connell is constantly trying to decide between his desire to fit in and the strength of his feelings for Marianne. He constantly pushes her aside to go with the safer and more boring choice but still craves her attention. Theirs is, by no means, a traditional love story but it feels like a human one. And it feels like a hopeful one.

This is a novel that draws you in with its willingness to be frank. It deals with dark emotional and sexual feelings with such casualness that you don’t think anything of it. It counters that with an inescapable wit, warmth, and kindness. Both Marianne and Connell go through some incredibly tough moments but there is never a loss of hope. They find that in each other so we, as readers, find it within them too. Normal People doesn’t try to create a scenario in which anyone gets a particularly happy ending. It never tries to tell us that love is either easy or understandable. There is no formula at play here. Connell and Marianne go around in circles as they try to figure out what they are looking for and what they deserve from love. Yet, it is also not a cynical destruction of the type of novel that does present love in that way. It is a sympathetic analysis of two young people and their inner struggle.

It is beautifully written and the dialogue manages to be both contemporary and timeless at the same time. We know from certain references roughly when the novel is taking place but it feels like this could be any time. It might be a story about millennials and feature a lot of stereotypical language but it does manage to ring the comic and tragic out of simple human interactions. The conversations between Marianne and Connell are so layered that even a simple chat about groceries would probably be brimming with humour, sadness, and eroticism. It’s a thrilling to sit back and watch their relationship develop.

The reason, no doubt, that this book has achieved such widespread acclaim. It is so much more than you average teenage romance. It is the captivating and ruthless portrayal of love in all its messy and confusing glory. It shows us how love can break you into small pieces but, on the flip side, how it can set you free. No matter how fleeting it may be, it gives you a place and a purpose. You find yourself through these connections and, no matter how they end, that’s something that will last forever.