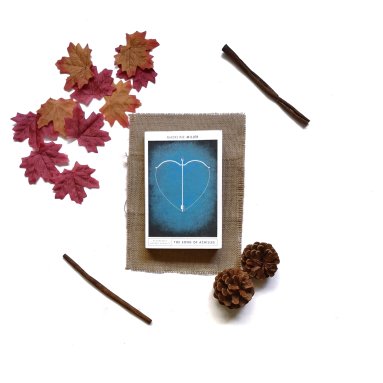 I meant to start writing this review last night because I’ve got a busy couple of weeks ahead of me. Inevitably, I didn’t manage it as I got distracted and, if I’m not careful I’ll do it again tonight. It’s all because of this book as well. I have been a fan of Greek myths since I was a kid and got given a book about them. Before writing this post, I decided that it was vital to find the book online so I knew the name. I never did, which is a shame because I bloody loved that book. It presented the Greek myths in a child-friendly way that really played up the humour. Something that really helped distract from just how horny Zeus and everyone really were. It meant that I became interested in the myths rather than disturbed by them. With that kind of background then this book should have been right up my street. So, why has it taken me 7 years to read it? A very simple answer… the cover. The original cover (featuring a breastplate that looks more Roman in my mind) just looks tacky. I know I know. Never judge a book by its cover etc. But, come on, it’s awful. If Bloomsbury hadn’t released the beautiful Modern Classics edition then I might never have experienced this book at all. I owe them.

In the Homeric tradition, there was never a sexual relationship between Achilles and Patroclus but, over the years, writers have continued to expand on their relationship. Madeline Miller runs with this theory for her novel and ends up presenting the story of one of Greece’s greatest heroes as a sweet LGBTQ love story. The novel is narrated from Patroclus’ point of view and we see his journey from being “the simple son of a simple mother” to a hero in his own right. After a childhood incident leads to the unfortunate death of another boy, Patroclus is disowned by his father and shipped off to another kingdom. That kingdom just happens to belong to Peleus who, as well as adopting disgraced young men, is the father of Achilles.

From the moment they meet, Patroclus and Achilles have a deep and unwavering connection. They grow up together and share everything. Patroclus is astounded by Achilles and the power he wields. He feels lucky to be able to be his right-hand man even though he might not understand why he is worthy of the honour. Achilles is the son of a Sea Nymph and the king who raped her. He sits in the strange place between human and God and, it has been foretold, he is set to forge a great legacy. Oh, and die an untimely death. So, when Helen is kidnapped by Paris, Patroclus obviously isn’t too keen for him to go to war. But we all know how this story ends and we have to spend the entire novel waiting for the inevitable heartache.

However, Madeline Miller has created such an engaging and sweet story that you want to follow it. Patroclus is a great narrator who shows a more sensitive and human side to Achilles. He has so often been seen as the ruthless soldier that it’s kind of refreshing to see a different side to him. It doesn’t exactly shed a new light onto the story we know from The Iliad but it presents it as more of a contemporary romance. Taking the focus away from the violence is both a blessing, in terms of being able to engage with the characters, and a curse. Pacing is a bit of an issue in general but it is exacerbated thanks to Patroclus’ narration. Not only do we start at too early a point in the story but the focus is on the less exciting things. Important moments are glossed over whilst tiny details are obsessed over. It is hard to ignore the fact that the final third or so is the much better read.

And I think there is a slight issue with tone that comes from a desire to keep things both contemporary and classic. The writing has a weird mix between lyrical and poetic language to more modern dialogue. It is something that takes a while to get used to and, though I did, I can see that many readers may not like it. Miller seems so keen to celebrate the original source that she isn’t quite sure how to deal with it for a modern audience. As such, there seem to be a fair few moments that explain the actions of the characters as if we wouldn’t be able to fathom their motivations. Some moments end up feeling like a textbook and not a novel but that’s a small quibble.

A bigger quibble is sex. Not only does it feel out-of-place given the source material but it’s so badly written. One could argue that a writer trying to be so faithful to her Classics background should have realised that overt references to sex wasn’t exactly appropriate. But, I’m not entirely sure that I care. What I care more about it how awfully written it is. Now, I’m a lover of the Bad Sex Awards and genuinely love a bad sex scene. I don’t think there’s a writer out there who has mastered the art of describing it but Miller takes it to a whole new level of cringe. On the one hand, it feels like the kind of softly lit sex scene you’d find in an 80s movie. On the other, it has the whiff of a chaste teenager’s attempt at writing porny fanfiction. It’s something I glossed over in my reading and will continue to gloss over now.

To sum up, after I finished this book I utterly loved it. I was blubbing for the last few pages and the final page absolutely ruined me. I loved the story and I loved the way Miller brought the characters to life. I was sure this was another 5 star read for me this year. However, in the time it has taken me to get round to this review, I started to question certain aspects of the novel. I didn’t hate it but I think the idea of it being a flawless read is more questionable. First The Crimes of Grindelwald and now this. I change my mind as often as that sexist Katy Perry song, Hot N Cold, suggests women change their clothes. And much more often than I do, in fact, change my clothes.