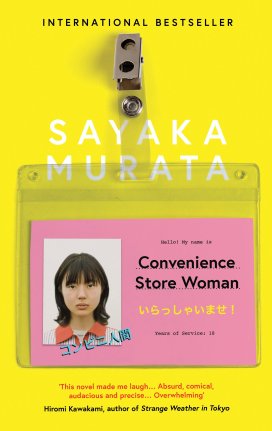 It became very apparent at the start of this week that there was no way that I was going to finish the book I was currently reading for this post. So, on Tuesday lunchtime I had a mad dash around the charity bookshop next to work to find something I could finish in a day. There were plenty of possibilities on offer but, having recently seen this on Instagram, I felt the discovery of this book was fate. Not only is the book gorgeous but it’s something I’ve only heard great things about. So, I bought it and started reading it immediately. I didn’t get as much reading done last night because I ended up dropping my phone outside my friend’s house. I ended up spending the time I had put aside to read desperately trying to find my phone and arrange to get it back to me. Still, thanks to a lunchtime of ignoring my coworkers and just reading, I finished the book in time. Now I just need to get this post written.

There’s something about a book or film title that does exactly what it says on the tin. The classic example is Snakes on a Plane that is so perfect a title that nothing else would have worked as well. Convenience Store Woman is another of those perfect title that so literally describes what the book is about that you can’t help but love it. by Sayaka Murata’s story centres around a woman in her late 30s who has always found herself on the outside of society. Growing up, her behaviour caused concern for her family, friends, and teachers alike. They spent time trying to “cure” her odd behaviour and violent tendencies. Through her narration, we can see that Keiko views the world differently to the people around her. She gets in trouble as a child because she breaks up a fight at school by bashing one boy on the head with a spade. Her classmates and teachers are horrified but, to Keiko, it was the most immediate way to end the disruption.

It is not until Keiko enters the workforce ages 18 that she is able to really find a way to fake her way through life. After getting a job at a newly opened convenience store, she is shown the training video which covers every aspect of her job. It tells her how to look, how to talk, what to say, and how to provide the best service possible. It becomes Keiko’s manual for how to infiltrate “normal” society. When she is in the store, for all intents and purposes, she becomes just like everyone else. And she is happy with her lot in life. She begins to understand the ecosystem of the store and is able to anticipate problems before they arise. For Keiko, working in the store is everything she could want.

But, unfortunately, society has other ideas. As the years pass, it becomes a worry that Keiko has stayed in her part-time job and has been unwilling to find a husband. It is expected that, by her age, she would have settled into her role as dutiful spouse and be looking after at least one baby. The fact that Keiko is happy with her lot in life scares her family as much, if not more, than her worrying behaviour as a child. That’s where Shiraha comes in. When he is hired to work at the store, Keiko takes a dislike to him and he is quickly fired. But he soon provides her with a way to appear more normal.

When she discovers that Shiraha has nowhere to live Keiko moves him into her home. She will feed him and allow him to spend his day lazing inside and, in return, she can use him to keep her friends and family happy. It appears that seeing Keiko in an unhappy and troubling relationship is much more satisfying than seeing her single and satisfied. So the pair continue their ruse despite not really liking each other. They disagree on every topic and neither has any desire to bring sex into the equation. It is all just for show. Shiraha spends his days lying in a bath whilst Keiko continues to go to work. But, from the outside, the pair are doing their duty as adult humans and that’s all that matters.

Convenience Store Woman is a strange and very funny novel. I instantly fell in love with the deadpan prose and poetic language. The story is captivating despite its simplicity and repetitive nature. It’s central character is compelling in a way that reminded me of Eleanor Oliphant. You can’t help but like Keiko despite her oddities and very blunt way of viewing the world. My only issue is that there are aspects of her character that don’t seem as well explored as they deserve. She often makes references to a more bloodthirsty side that is never really developed fully. It’s a wasted opportunity but doesn’t really detract from the novel as a whole. Which was a truly enjoyable experience. It didn’t take long to read and I could hardly put it down. This is the kind of book that has a lot to say about society as a whole and Sayaka Murata shines a light on Japanese culture. There is a lot about the anxieties at play underneath the surface with regards to marriage and children.

Ultimately, though, this story is a love story. This is a story about finding beauty and a sense of belonging in unlikely places. As time moves on, you can kind of see why Keiko feels so at home at the store. It all starts to make sense. She feels it and interprets it better than most women can understand their husband’s behaviour. It stays with her and fills her senses. The store is a part of her just as much as she is a part of it. She can feel it on her when she’s at home. Keiko doesn’t need to find a husband. She has already found her soul mate.