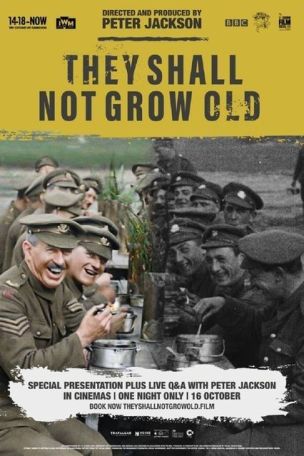 The use of technology hasn’t always been seen as a positive thing in Hollywood. There have been countless times when it has been criticised for taking the humanity away from the screen. I mean just look at the scary motion capture of something like The Polar Express. But it’s impossible to ignore the amazingly positive impact that digital effects have had upon film making. And, I guess, nobody really understands that more than Peter Jackson who was at the forefront of the digital revolution thanks to his Tolkein trilogies. So it kind of makes him the perfect choice for this project in honour of the Armistice centenary.

Jackson and his team were commissioned to painstakingly revive archive footage from both the BBC and the Imperial War Museum. The results are mesmerising. The work that went into the restoration are obvious throughout and it’s impossible not to have a huge respect for the time that went into the project. For starters, the pace of the original footage has been altered to bring it up to line with modern frame rates. Then colour was added to the footage along with sound effects. To further bring the footage to life, using lip readers, actors have recorded dialogue so we can hear the soldiers speak. Far from taking anything away from the footage, Jackson and his team successfully bring the humanity back to the films. It’s breathtaking.

And I mean that kind of literally. The film starts with the footage shown in black and white with voice-overs of veterans playing over the top. Then, suddenly, the footage turns to colour and the sound kicks in. It’s a spectacular moment and my heart stopped. Suddenly this archive footage becomes so much more real. The people we see aren’t just a part of history; they are real young men making their way to war. That swift change is the point when this film stops becoming a documentary and becomes more of a time machine. You are no longer just watching the men in 1914 signing up but you are with them. And it’s really difficult to not let the emotional resonance of that keep smacking you in the face. Especially as you see footage of young men, so visibly under the minimum age requirement, happily enter their training. I lost count of the times tears were streaming down my face. But you can’t help it.

Jackson has forgone the traditional narrative of a World War One documentary. There is no historical context. No historians explaining the socio-political situation that brought us to the point of war. There is no critique of the way the war was handled or the overall consequences of the conflict. Instead, he lets the men at the heart of this film do the talking. We are guided by the soldiers in the voice-overs as they take us through the years of the war as they saw it. There is no big picture here. That’s not the point. This is about giving a voice and a face to the people out in the field. We go through all of their emotions from the excitement at signing up, the thrill of basic training, their keenness to get some action, the horrible conditions, and the ways in which they made their lot better. It’s a sad story, obviously, but the way Jackson has handled it means there are a lot of positives to see. We see the comedy that the men were able to bring with them and even the connections they made with German soldiers. This is a film full of life and full of heart.

I’m not foolish enough to suggest there aren’t things Jackson could have done differently and I do agree with arguments that people have about the film only showing British soldiers. However, he only had finite resources to work with. Plus, gathering more archive footage would have given the film less focus. What Peter Jackson has managed to do, is give the most realistic view into the Great War that we have ever seen. The title, a misquote of the famous line from Laurence Binyon’s ‘For the Fallen’, tells us these men shall not grow old. With this film, Jackson has ensure that they have made their way into the modern world and connected them with modern audiences in a more powerful way than ever before.

As a historical documentary, They Shall Not Grow Old may not be the most useful but it is an important historical artefact in its own right. It is an astounding feat of digital technology but it is more than that. It is a haunting and effective piece of film making. It’s something I’ve clearly still not recovered from watching based on the number of times I’ve nearly cried whilst writing this review. It is a must see film and it will stay with you forever. The original line of Binyon’s poem (“they shall grow not old”) suggested that the men who died would never be forgotten. That we would never forget. And, though it adds very little to the narrative surrounding the war, Jackson’s film ensures that remains more true than ever. For never before has it become more difficult to ignore that the men who died for our freedom were real people. That the events we are more used to reading about in books or hearing about on television really did happen.