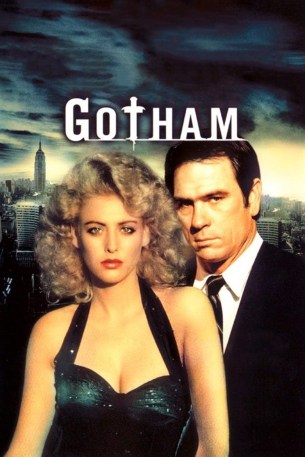 Some weeks I plan ahead what I’m going to watch for this throwback post so I know what I’m going to be in for. Other weeks I just randomly search for a 1988 film and pick the most ridiculous. This week was the latter. I’ve just not been in the mood this week. I’m in a massive funk right now thanks to various things so I just wanted to watch something simple and easy. And if it involves Tommy Lee Jones then all the better in my opinion. I’ve always kind of love his blunt and no-nonsense attitude. I love the fact that the man I probably first became aware of in Men in Black actually has no time for jokes. Just remember what he was like at the 2013 Golden Globes with his stony-faced reaction to every joke. It’s iconic. As someone who often just has no time for people, Tommy Lee Jones is kind of my idol. So, a random made for TV movie where he falls in love with a ghost? How the hell could I not?

It’s only been a short time since I finished watching Gotham and I’m still not entirely sure what happened. It’s the story of a private detective, Eddie Mallard, (Tommy Lee Jones) who is approached by Charles (Colin Bruce) to help stop his wife, Rachel (Virginia Madsen) stalking him. Of course, Eddie isn’t exactly enthused by this case until he finds out that Rachel died 10 years ago. According to Charles, she has come back to take possession of the jewels she demanded he bury with her. Eddie initially thinks he’s crazy and approaches the woman Charles believes to be Rachel. He ends up falling for her and being dragged deeper into the weirdness.

Gotham is a weird mix between a noir detective thriller and a ghost story. It plays up the spooky elements whilst never completely deciding on what is or isn’t the truth. Is Rachel a ghost or is this just one big con? Who knows? I’m not even sure the writer, director, or stars know. I had to keep going back during my viewing of the film because I kept thinking I’d missed something. It’s all over the place. But not in that end of Inception, we did this on purpose kind of way. In the what the hell have we got ourselves into kind of way.

I kind of hoped that Gotham would at least be funny but there’s nothing. It’s all so serious and over-the-top. Which, considering how much of a hot mess it is, is super ridiculous. I genuinely don’t know what to say about this film. I don’t know why it was made or what the point is. I’m confused and angry that I had to watch it. And I’m confused and angry that a gorgeous potential ghost decided Tommy Lee Jones was the man for her. When it comes down to it, the only thing I will really remember about this film is the time a character through an egg cream in Eddie’s face meaning Tommy Lee had to carry on acting with milk on his face. It’s something I could watch for hours. The rest of the film? I can barely even remember watching it the first time let alone going back to it.

"It would be a dull world if we all thought alike."
Thank God it's Folio Friday!
I may have made a mistake with this purchase because I've not got a great track record with this genre. It just sounded irresistible. A dinner party and a murder? Exciting.
Do you have a favourite Kazuo Ishiguro novel?
I'm not setting an official TBR this month after what happened last time. However, I will possibly probably get around to reading this in April maybe. It's something I've been meaning to get around to for a while and I will need a P title for my Spell the Month Challenge.
Today's review went up on the blog this morning.
Happy Easter everyone!
What are you reading over the Easter weekend?
Good Folio Friday everyone!