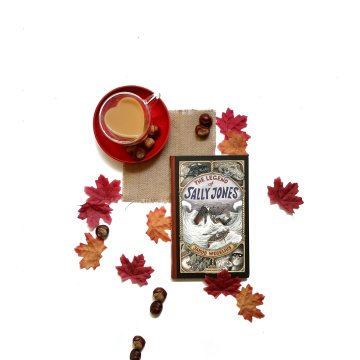 I don’t read enough graphic novels but I do love them. To the extent that every time I read a great one I think to myself “I should read more graphic novels”. It was Sabrina that really got my heart pumping for a good graphic novel this year so when I was given the chance to read a new release from Pushkin Press. It is the prequel to Jakob Wegelius’ critically acclaimed The Murderer’s Ape. I hadn’t read The Murderer’s Ape but everything that I found out about it suggested that it would the kind of thing I loved. And the promise of a unique and rare graphic novel was something I couldn’t ignore. It arrived last Thursday and I immediately started reading it. I was done by Friday and I’ve already ordered Wegelius’ first book.

Sally Jones, the character first introduced to the world in Jakob Wegelius’ The Murderer’s Ape, is the engineer of a ship called The Hudson Queen with her friend the Chief. Sally also happens to be a gorilla. The Legend of Sally Jones is the prequel tale that shows us where Sally came from. The story is presented as something like a children’s picture book mixed with a graphic novel and it takes the reader on a journey from the Congolese rainforest to the grain bazaar of Istanbul, from Borneo to London, Singapore and beyond. It is unlike anything I’ve read before and I was hooked from the moment I first set eyes on the cover.

When it comes to graphic novels, the illustration is, in my opinion, more important than the words a lot of the time. I would much rather experience a graphic novel with fantastic illustrations and mediocre text than a really well written story and passable pictures. The style of The Legend of Sally Jones is something quite spectacular. There is a vintage and kind of creepy feel to all of the illustrations but they are captivating and beautiful. There is nothing cartoonish or childish about them and there is a definite darkness underlying everything. For lack of a better way of describing it, Wegelius’ illustrations feels very European and take inspiration from a variety of artistic sources. There are hints of nautical design as well as traditional techniques. And I love them. I could look at them forever. It had a similar feel to Sabrina and I wish there had been more.

But, I guess if there had been more, then something would have been lost in terms of the story. The Legend of Sally Jones is an exiting adventure story that will appeal to readers of any age. It feels like a very grow-up story as it never speaks down to the audience. It doesn’t follow the Disney route of being an overly happy and sappy fairytale. It features real heartbreak and emotions. Sally’s isn’t the tale of a magical gorilla who meets her best friend and lives happily ever after. It feels like a representation of real-life despite the fact it is narrated through the story of a primate. I’m at an age now where I judge books for children based on how willing I’d be to read them to my future children or the future children of my loved ones. As I read The Legend of Sally Jones I found myself desperately wanting my friends and family to start procreating so I’d have the chance to do it one day. It is beautifully written and has a really great flow to the tale.

And what a great tale that it is. If Wegelius’ illustrations have a vintage feel to them then the story itself is a classic adventure tale. Sally is taken from her home in rainforest as a baby and sold to a Turkish merchant. From that moment on, Sally finds herself constantly on the move and at the mercy of various new owners. She experiences love, betrayal, heartbreak, and loneliness. There are unsolved crimes to get to the bottom of, captives to save, and journeys through wildest Borneo. It is the kind of adventure story that young boys would be forced to read in the Victorian era to ensure they grew up to be real men with real hairs on their chest. It’s exciting and fast paced. It’s silly but has just enough danger. It is clever and thought-provoking. And, above all else, it’s super fun and engaging.

I don’t know about you but I always feels a little wary when someone describes a book they’re selling as “unique” or “rare”. It always feels a little too good to be true. Yet, that is exactly what The Legend of Sally Jones is. I’ve not read a book quite like it and I’ve not responded to a book in this way for ages. It filled me with such unbridled, childlike joy that I think I genuinely reverted back to my younger self for a bit. Reading this book is bittersweet for a number of reasons to do with the story. However, for me, it was more so because the happiness I felt that children nowadays could get to read it mixed with the sorrow I felt that younger me had been denied it.