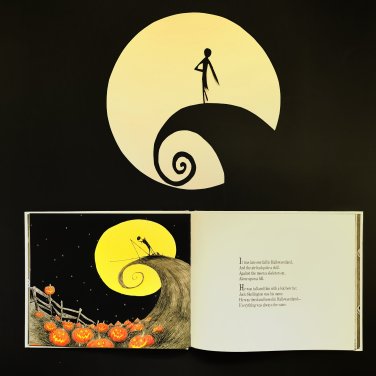 So, this week definitely got away from me somewhere. I expected to be finished with another book by this point but I’m still reading both of the books I’ve got on the go. I should have Matt Haig’s Notes on a Nervous Planet by next week but, for now, I’m having to find something random to fill out this post. Thankfully, it’s nearly October and I’ve been trying to get into the spirit of Halloween all month. Last week I posted a Nightmare Before Christmas themed post on Instagram so when I discovered this book tag everything seemed perfect. It helps that I love both the book and the film A Nightmare Before Christmas. But who doesn’t? It’s the perfect film to start you off on your journey to Christmas as early as October. Why wait until advent to start watching Christmas films when Tim Burton has you sorted? And why watch the film when you can do the book tag? Yeah? No? Okay. Well I’m invested now.

A weirdly difficult question if I’m honest. Either I don’t pay attention to romance in books or I don’t read enough books about romance. I tend to prefer books where nobody ends up happy… I’ll let you judge what that says about me. But, in this case, I guess I’ll go for Colonel Brandon from Sense and Sensibility. God knows why he’s so in love with Marianne but good on him for winning her round in the end.

Jack – A book with a character who longs for more

Most obvious choice award: Pip from Great Expectations. I mean the book is literally titled for his massive expectations about his future. Pip wants to be a great man and thinks the only way to do that is money. So, instead of ending up like Joe, he dreams of being taken away by creepy Miss Havisham. Who wouldn’t want that cobwebbed weirdo taking them away?

Zero – a book with a loyal sidekick

Is there any better or more loyal sidekick than Dr Watson in the Sherlock Holmes books? Considering Holmes himself is a massive arse, Watson puts up with him remarkably well. He takes the patronising manner and the opium addiction with a pinch of salt. He continues to be impressed with everything his friend does. I can’t imagine it was easy.

Oogie Boogie – A book with a wicked villain

Let’s be honest, there are so many more great villains out there than there are heroes. Just look at the Harry Potter series: Harry is the worst (particularly as the series gets towards the end) but the villains are so well written. Especially Umbridge who is the genuine worst. She’s awful and is only doing it for the pleasure it gives her. Voldemort is terrible but, in some ways, it’s okay cause he’s doing what he thinks is right. Not many ways, granted, but at least one.

Halloween Town – A book with a weird or creepy theme

It’s October so I’m trying to read more spooky and creepy books. One of the ones I was desperate to try to reread (but I definitely won’t) is The Monk by Matthew Lewis. It’s one of my (if not only) all-time favourite book and a fantastic example of early gothic fiction. It’s an outrageous and weird read with every gothic trope you can think of. It’s super dark from the start but is so much fun. I’d recommend it anyone and everyone.

The last book that I read that left me feeling all warm and fuzzy was Eleanor Oliphant is Completely Fine. It was a book that put me through the ringer for a bit with its emotionally fraught narrative. But it’s also the kind of story that you can’t help but fall in love with. The ending, though a bit too fairy tale, is just adorable and sweet. It leaves you full of hope and happiness.