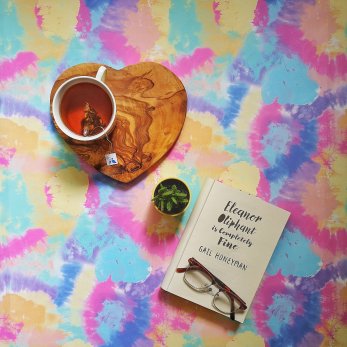 I often worry about books that everyone tries to force me to read. There have been so many occasions where I’ve read a super hyped book and been utterly disappointed. When my friend gave me a copy of Gone Girl it was accompanied by the fact that Molly Ringwald had loved it. You’ll probably remember from my ’30 Books for My 30th’ series that I never finished Gone Girl because it bored me to tears. Everyone I know raves about how good it is and how shocking the twist is. I feel like they must be reading a different book to me. I could see where it was going from the start. Then there was The Girl on the Train, which was celebrated as the new Gone Girl and named as a “must read”. Another super obvious and boring psychological thriller. I hated it but I did finish it. So, when I saw Eleanor Oliphant all over Instagram I became suspicious. It started to win awards and a friend of mine kept insisting that I read it. Still, I wouldn’t let myself believe. It wasn’t until I stumbled across a cheap copy in a charity shop that I decided it was time to read it. Would it be as good as everyone would have me believe?

In recent years there has been a huge drive to highlight the importance of mental health. There are countless examples of books, television shows, and films that hope to highlight the real struggles that many people are facing, some of them silently. Eleanor Oliphant is Completely Fine is a novel that deals with the issue of loneliness. For despite this drive for openness about our feelings, loneliness is still a subject that is not oft discussed. Yet it is a massive issue in our society. Especially with social media giving the impression that people are living active and happy lives with their friends.

At the novel’s opening, Eleanor Oliphant is living a solitary life. She goes to work, does as little socialising with her colleagues as possible, goes home, watches TV, and repeats. At least until the end of the week when she stops off in Tesco on her way home to buy a pizza and two bottle of vodka. She eats the pizza on Friday and rations the vodka over the weekend. She has basically no human contact in her daily life save for her co-workers, shop staff, and visits from her social worker every few months. Eleanor’s childhood was traumatic and she has slowly cut herself off from everyone around her. She is fine with the arrangement. Completely fine.

Until an event forces Eleanor to accept new people into her life and start to make some changes to her life. It starts when she attends a gig and meets the man of her dreams. Well, I say meet but it is more of an intense, one-way crush on the lead singer of an obscure up-and-coming band. Overcome with a rush of emotions, Eleanor decides that, in order to bag her man, she has to change herself and fit in with everyone else. She gets a makeover, changed her clothes, and gets a haircut. She finally becomes, in her own words, “shiny”.

The narrative itself has it’s ups and downs as does real life. It isn’t always a happy and jolly read but it is always a joy. Eleanor herself is the epitome of charm and you will fall in love with her from the offset. She’s funny without meaning to be and completely without malice. Everyone will be able to see something of themselves in her as well as parts of the person they want to be. For a novel that unashamedly deals with some of the darker aspects of human life, it is an incredibly warm and uplifting novel. Yes, there are also the heartbreaking lows and painful self-examination. But this is a novel that, despite everything, champions kindness.

Something that is helped thanks to the cast of supporting characters that Eleanor meets. These people aren’t heroes or villains. They feel real and deep. Everyone you meet has something to them that you can relate to. They could all be real people. It is a deftly observed and well-written book that I blazed through in a matter of days. It’s the kind of book that you finish, turn over, and start reading over again. It gets under your skin. Eleanor gets under your skin. The book itself is so funny and heartbreaking at the same time. It builds you up, breaks your spirit, and then, super slowly, starts to build you back up. It is, in a word, life. It is one of the most rounded and honest portrayals of human life that I’ve ever read.

My only gripe, and the only reason that Eleanor Oliphant didn’t get a full 5 stars, is that I wasn’t a massive fan of the twist ending. It seemed underdeveloped, rushed, and unnecessary. It feels as though it were only included in a way to make the book more exciting and it really didn’t need it. That’s not to say that I hated it, of course. I just think if it was going to work it needed to be explored further. It certainly didn’t ruin my enjoyment of the rest of the book and I would safely say that, along with Less, this has been one f my most pleasant reads of the year. A stunning debut from Gail Honeyman. I look forward to seeing what she has to offer next.