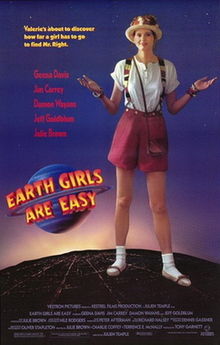 I have a lot of books. Too many books if you ask some people. I have so many books that they’re piled up on the floor in every available space. I have bookshelves in every room and boxes overflowing with reading material. I’m obsessed with books. In terms of volume, I own more books than anything else. Although, I’m quickly catching up to that total with my collection of items featuring Jeff Goldblum’s face. Of course, there is a big difference but I’m slowly amassing a great selection of things with Jeff Goldlum on. Mostly it’s of that classic Jurassic Park scene where he’s unnecessarily sexy because it’s an iconic moment. I have mugs, pillows, t-shirts, and Funko Pop Vinyls all using that scene as inspiration. But, when it comes to Goldblum, I’m not fussy. He’s a fantastic actor and an incredibly interesting human being. I adore everything about him. And, it just so happens, that he’s the star of today’s TBT post. A film that I’d heard about but never seen until yesterday. I’ve been feeling a bit unenthusiastic about this feature lately but the prospect of watching this really invigorated me. I was actually looking forward to it for a change. And it wasn’t just about the prospect of seeing more of sexy Goldblum.

Earth Girls Are Easy is a weird film. It stars Jeff Goldblum, Jim Carrey, and Damon Wayans as hairy aliens who crash into the pool of a nail technician, played by Geena Davis. She subsequently shaves them and turns them into dashing pin-ups. It’s all very 80s and takes a lot of glee from its setting in The Valley. But it also has an incredibly nostalgic feel to it. It’s like an old sci-fi B movie mixed with an MTV music video or something. It’s a lot of fun but a huge mish-mash of ideas and way more song breaks than I think were absolutely necessary. And I say that as someone who loves an out-of-place song and dance number.

The basic plot is the trio and their saviour attempting to get the aliens’ ship running again. Obviously this turns out to be fraught affair. The manicurist, Valerie, must hide her new housemates from the fiancé she just kicked out for being unfaithful. So she takes them to her place of work where her co-worker gives them the ultimate makeover before taking them out on the town. There follows many high jinks and a slightly uncomfortable romantic plot before the aliens are able to make their return journey. It’s all very weird and is barely able to hold itself together.

It seems to me that the main focus of the film is to recreate that stereotypical Valley scene and the people who inhabit it. There are plenty of obvious and key phrases that the aliens pick up on that, in any other context, would see their true identity revealed. Surrounded by the characters they meet, however, it is possible for them to have meaningful conversations based entirely on repeating various soundbites they hear on television. I guess if this was just a slightly weird critique of this part of society then this film might seem more successful. Unfortunately, there is that pesky science-fiction side to deal with.

As much as I enjoyed the nostalgic feel of the special effects, the makeup, and the alien language, the whole piece just feels like a parody that never really catches its stride. It’s always missing its target just slightly. There are some great moments to watch, like an incredible but stupid dance-off, but most of the time the jokes don’t land and the weirdness just feels too much. And it feels like two very different movies have been spliced together. Carrey and Wayans are playing up the slapstick elements of their fish out of water aliens whilst Goldblum and Davis are both in a completely different universe. They are both so straight-laced, especially when it comes to their cross-species romance, that it jars with the subplots.

I can’t say that I’ll be rushing out to watch Earth Girls Are Easy again any time soon but it’s entertaining enough for what it is. It’s not a must watch science-fiction or comedy film but it’s an experience. There is something about the ragtag bunch of ideas that feels watchable despite everything telling you it shouldn’t work. There’s a sweetness and a silliness to this film that means I won’t discount it completely but, if I need to get my sexy Goldblum fix, I’ll stick to Jurassic Park for now.