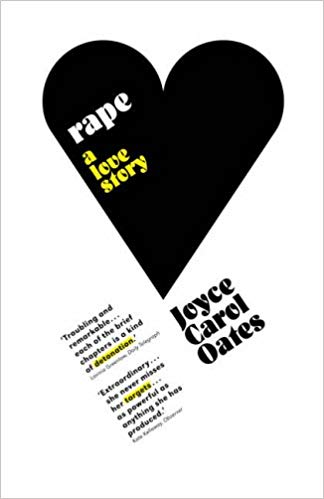 You may remember that last week I read a purposefully quick read in order to get another review posted. After starting the first book in the Mistborn trilogy last week I knew I wasn’t going to get that finished in time. I mean it’s an epic fantasy novel that’s over 600 pages long. At this point in time I’m only about 1/6th of the way through. I’m being pretty slow at reading lately so even if I had forgone sleep every night I still wouldn’t have done it. And it really wouldn’t have been worth going through work being that tired. It’s been a rubbish few days as it is so I don’t need anymore problems! So, realising that there was no way I could write anything about Brandon Sanderson’s novel but wanting to continue my streak, I decided to pick a short novel to read. That ended up being this novella by Joyce Carol Oates.

A few years ago I read Missoula by Jon Krakauer, which was an in-depth look into the number of sexual assaults in a college town in America. It was a bleak and horrible insight into the American legal system with respect to rape. I don’t necessarily say that it was the best book to read on the subject but it was definitely something that stayed with me. It’s also something that came to my mind whilst reading Rape: A Love Story. It is the tale of a 30-year-old , Teena, who is attacked and sexually assaulted by a group of young men on July 4th when she is walking home with her 12-year-old daughter, Bethie. Joyce Carol Oates’ narrative discusses the aftermath of that one event and the impact it has on the individuals involved and the wider community.

Rape: A Love Story is a truly terrible novel. By which I mean it follows a horrible subject matter and introduces us to some horrible people. It is not a pleasant read but it is a powerful one. It opens in a boat room just after midnight with a young woman getting raped as her young daughter, hiding in a dark corner, listens on. We see the differing reactions ranging from the caring police officer to the vicious family members of the accused and the gossiping people in the community. Teena changes from being a fun-loving young woman to a broken shell who believes she’d have been better off left to die. Her daughter fears for her mother, herself and her grandmother whilst slowly realising that her childhood is over. This is the kind of story that gets under your skin and shows you that one single crime sows the seeds for further discomfort far and wide.

To make sure this hits home, Joyce Carol Oates turns this into a highly personal novel. There is no sense of neutrality at work here: we know who is in the right and who is wrong. But we are also aware of who everyone is. We see the victims as they were before the incident and how they change. We know that, though she has her flaws, Teena is essentially a good person and a caring mother. Though this is not just a novel about these two women but everyone involved. We get a deep insight into the first police officer to see the scene of the crime, Dromoor, who was a soldier before joining law enforcement. He describes himself as someone who saw his soul die during the Gulf War but he is deeply affected by Teena’s story. He becomes her silent champion and sets about handing out his own form of justice. A sort of immoral hero. This is a story that is not afraid to remind you that even salvation is full of complications.

I won’t pretend that Rape: A Love Story is an easy read but it is something that I would highly recommend. It is a beautifully written and engaging novella. It will definitely get under your skin. It feels like a very claustrophobic novel and you end up feeling as trapped as the characters themselves. There is something about it that feels very ferocious and, almost, sermon like about it. It’s difficult to read this and not get fired up. It has been written for every person who has experienced sexual assault, the threat of sexual assault, or the fear of it. It is a response to the number of occasions an attacker was set free whilst the victim was left being judged. Joyce Carol Oates isn’t afraid to make her audience feel uncomfortable to get her point across. This is an attack of misogyny and victim blaming. On the unfair legal system that demands the accuser proves their attacker’s guilt and not the other way around.

This isn’t a story you will read for pleasure but it is a read you will enjoy in some way at least. The prose is beautiful and haunting. The subject matter is unforgettable and powerful. This novella will drag you in, put you through the wringer, and leave you to face the world with your newly gained insight. The story shows you that one single moment or choice has the ability to totally transform you life. Just as the single act of reading it will transform yours.

One thought on “Book Review – Rape: A Love Story by Joyce Carol Oates”