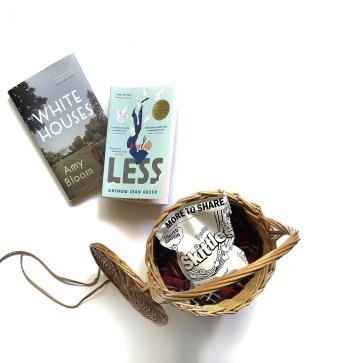 Can you fucking believe it? I’m posting another book review only a week after my last one. It’s insane. I’m actually doing this reading thing properly. If you’re not careful I might actually become a proper book blogger. You know, the kind that posts book reviews more often than vague ramblings or book tags. Probably don’t hold your breath but who knows. Still, lets not dwell on it too much or my progress will be ruined. To the review! I started reading Less last week because I didn’t feel that I was really paying enough attention to LGBTQ+ reads during Pride. It was actually this irrational (but justified maybe?) fear that my reading wasn’t diverse enough that caused me to buy Less after I had bypassed it on so many occasions. I even bought it full price so determined was I to read something appropriate this month. I have to y, I was shocked by how easily I got into the story and always looked forward to my nightly visit to the world of Arthur Less. Maybe it helps that the character of Arthur kinda reminds me of someone I work with but, really, that’s probably only because he’s the only 50 year-old gay man who I know personally. But, hey, it got me reading so who cares…

I didn’t know what to expect from Less before I read it. I knew it had won the Pulitzer Prize this year but, from what I could tell, it didn’t sound very Pulitzer-y at all. Not that it seemed bad but it seemed too much fun to be the winner. It tells the story of a writer as he is about to turn 50. Unable to deal with this milestone age and faced with the prospect of seeing his ex-lover get married, Arthur Less takes the extreme decision to suddenly accept every professional opportunity that comes his way. So, instead of attending the wedding of his ex-boyfriend Freddy, Arthur begins a worldwide adventure where he finds romance, tries to fix his next novel, and gets into more than a few scrapes.

Towards the end of the novel, Arthur attempts to describe his new book to an acquaintance. He tells her “it was about a middle-aged gay man walking around San Francisco. And, you know, his… his sorrows”. She replies, “It’s a little hard to feel sorry for a guy like that.” It’s both an astute and extremely witty moment within the novel and an example of the fun Andrew Sean Greer was obviously having whilst writing it. You see, how else could one describe Less other than middle-aged gay man walking around and his sorrows. Fortunately for Greer, by the point this piece of self-reflection is made every reader will have fallen for that middle-aged gay man completely.

Less takes the form of Arthur’s journey around the world and jumps back to key moments from his past: the stay in New York to interview a celebrated science-fiction writer; a trip to Mexico to discuss the work of a famous poet who also happens to be another ex-lover; onto Italy for an awards ceremony; a stint teaching in Berlin; a quick vacation in Morocco; a writing retreat in India; and, finally, a quick stop as a restaurant critic in Japan. It is the busy and eclectic life of a self-employed writer who is compelled to take as many other jobs as possible in order to survive. Less does a great job of offering up an insight into what it means to be a writer in this day and age. As well as how vicious the industry can be to a certain type of person. We see Less, a man getting into his later years, defining himself by his career but never feeling comfortable in that skin. Having rubbed shoulders with a genius poet in his youth, Less has only ever seen himself on the sidelines. Yet, writing is who he is.

It is his career that has come first to Arthur for the last few years. Love playing an obvious second fiddle. His relationship with Freddy was a complicated affair and is a direct mirroring of his first significant relationship. As a young man, Arthur started a relationship with the older and married poet, Robert Brownburn, and was always left feeling inadequate next to his literary talents. Years later, he finds himself in Robert’s position with the younger Freddy. Forever stuck in his early 20s, Arthur did not adapt well to this role reversal but is, nonetheless, devastated when Freddy announces his engagement. Hence his need to get as far away as possible. Unable to see or, at least, admit what is so clear to the reader and everyone around him: that he truly did love Freddy. But, after his journey of self-discovery, can Arthur at least find a way to be happy?

Less is a fabulous novel that is built around Greer’s sensational skill with language. There are some phenomenally beautiful pieces of prose on offer that it would take too long to quote them all here. I’d essentially just be writing out the whole fucking thing. It is full of wit and humour and is wildly entertaining in all areas. Unafraid, however, to be poignant or emotional, though, as it deals with the impending milestone of middle-age in a careful and understandable way. Never falling into the trap of melodrama or silliness. Maybe it helped that I read this in the same year I reached my own milestone of 30, but Less felt like a novel that dealt with this process in such an ordinary and relatable way. Far from not caring about this middle-aged man’s sorrows, you will be drawn in and hoping he gets through his journey unscathed further.

With Less, Greer has written a novel that sums up what it is to be a writer, a lover, and someone who never felt like he particularly belonged in any of his circles. It has plenty to say about the industry and the people who inhabit it. But it has just as much to say about happiness and love. It is a book that explores humanity through the lens of a truly relatable man. Less is an equally joyful and heartbreaking novel that will have you entranced. Unlike the writer at its core, Greer has created a character who he is unafraid to put through the ringer but also reward him fully. Arthur is a sympathetic and amiable character and his story is full to the brim with charm. I’ve literally only just finished reading it but I, genuinely, can’t wait to start it again.